One of the things I love about living in the PNW is getting to experience spring. Daffodils are the first flowers to pop up, usually in February when most days are still cold and snow isn't totally out of the question. By March, the trees burst into gorgeous blossoms of pink, purple, and white. Plum blossoms line our street, but the main attraction is always the cherry blossoms. 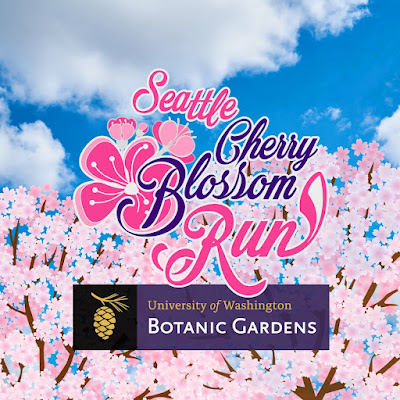 These trees can be found throughout the city, but the UW quad is where the big blooms are at. The quad is lined with thirty donated Yoshino cherry trees, and they are worth seeing every year. When we first experienced the bloom last year, the Cherry Blossom 5k — which had been virtual due to Covid — had already passed, but I knew I wanted to run it when it came back.. I stalked the race page until it opened for registration this year.
I'm providing this backstory because I want you to get an idea of how much I was looking forward to this race, because it really gives some context for my disappointment. The briefest version of this recap is: I'm glad I ran it, but I won't be signing up again.

To start, the race had about 10,000 registrants, which was quadruple the number they'd ever opened up to in the past. People could run either Saturday or Sunday, but over 5,000 were signed up for the Saturday half and 5k. Because of the numbers, packet pickup was only available the day before the race. It was a drive-through setup between noon and 7pm on Friday, so I asked Matt to go for me, since I was working until 4:45pm.

He was in the car line for literally three hours.

The lack of volunteers and the poor organization turned my excitement into dread. I realized that there was a reason the race page recommended parking by 6am, even though the start wasn't until 7:30. And honestly, that's just silly for a 5k.

I meant to turn this race into part of a long run, so I thought, okay, I'll get there early and have time to do one or two miles before the race, and then do a mile or two after.

I got to the lot to park around 6:30 and had plenty of time to use the bathroom and warm up, but I was so uncertain about where the start actually was, I ended up not warming up at all. I finally realized the corral was an unmarked path leading to an unadorned scaffold — there was a total lack of signage or announcements.

By the time I was in the corral, it was 7:25 and I was anxiously awaiting the gun. I ended up waiting another twenty minutes, because the start was delayed for some unknown reason. Twenty minutes doesn't seem like much, but it's about 2/3 of my running time for a 5k. My delicate balance of pre-race inhaler-food-water-bathroom timing was all thrown off.

After growing increasing frustrated at the lack of communication, we finally started at 7:43, and I was already mentally done. The first half mile or so was on a dirt access road, complete with mud, potholes, gravel, and loose rocks. At least it was flat!

Leading up to race day, I had been dealing with some leg and foot issues that I thought were possibly caused by my new shoes, and luckily my legs felt better than they had, but not as fresh as I would have liked. Still, when I hit mile 1.5, I thought to myself that I couldn't believe the race was nearly half over! It felt like it had flown by!

And then, the rolling hills started. The fact that I wasn't expecting them was a total rookie mistake on my part — I should have checked the course map! The entire 5k consisted of intense rolling hills. I ended up walking about half of them. I also had to stop completely around mile 2 to tie a shoelace that had come undone.

Although I walked the majority of the hills, I kept a pretty good pace until the last half mile, where the steady ascent got a little more steep and my legs and will just kind of...gave up. When I finally climbed the last hill and began the descent toward the finish line, I picked up some speed and managed to pass one more person, coming through the finish at full tilt. 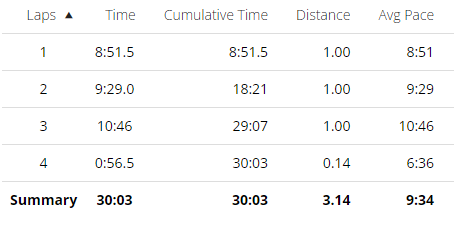 It was the slowest 5k I've run in awhile, and although I felt that it wasn't awful, given the hills and the circumstances with my legs, I wasn't really happy with it, either. Of course, then I saw how I'd placed and felt much better, because while I wasn't at the top of my game, I still managed to finish in the top 10 in my age group and top 10% overall. 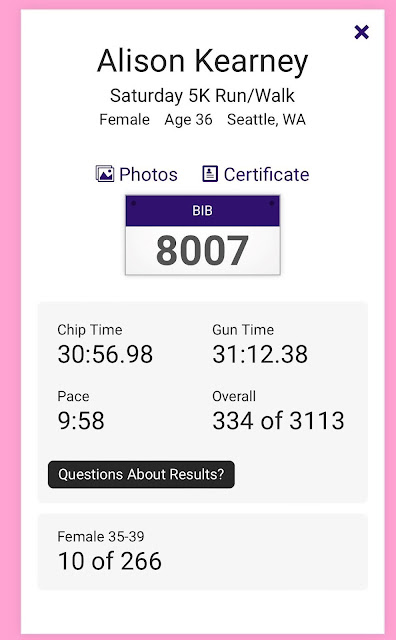 After the race, I grabbed Matt a cherry blossom donut (as promised, to make up for the packet pickup fiasco) and got some pictures in the quad. After all, that was what I signed up for!

The last nail in the coffin for this race was finding my car. I had dropped a pin and knew how to get there, but the participant guide had promised there would be big purple stickers marking the path back to the parking lot. Those stickers were nowhere to be seen and it just felt like one more thing the race organizer had promised and failed to deliver.

By the time I got to my car, I was cold and tired and it had started to rain. My disappointment in the race had put me in a bad mood and my legs were already feeling the hills. So, I shelved those extra three miles I'd been planning to do and instead went home to enjoy a hot shower and a nap. 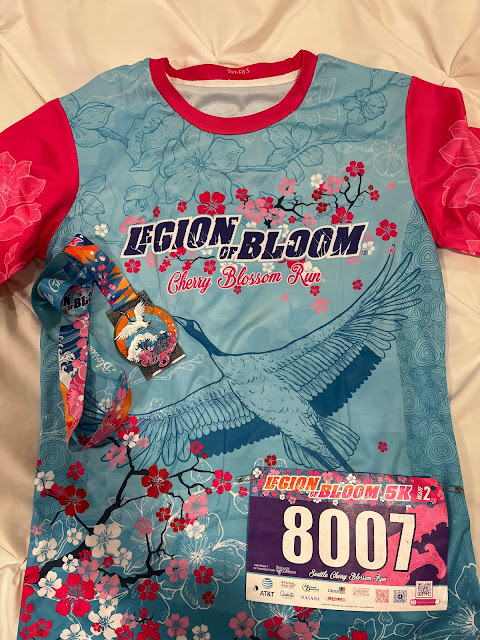 Now, since the race, the race director has reached out to all participants to apologize, explain where things went wrong, and express future plans to fix the issues. I appreciate the transparency and the commitment to improve, but I'm still not sure I'd do this one again. At the end of the day, it was a hilly 5k with a beautiful finish line but an ordinary route. Nothing special...and I can run on campus and see the cherry blossoms every spring — for free and as often as I want.