This was quite the week. K and I were awake and on time to each of our runs. We did every distance we planned, including a tempo run that I wrote about here. On Saturday morning, we planned to do 13 miles. As we dropped off our water at the 4-mile and 8-mile checkpoints, K and I began having doubts. But we soldiered on.

It took about four miles to really warm up, and then I felt strong. We kept a steady, slow pace in the mid-10s for most of the miles. (We even had some sub-10s, which is great considering our long runs are never that fast!) Around mile 9, both K and I began to feel the mileage wearing on us, and by the last three miles both of us were struggling through intense knee pain. Still, we picked up the pace for the last mile in order to come in under 2:15. My Half goal is (publicly) 2:30 and (privately...but now publicly) 2:15, so it was good to meet that goal in training!

The run did so much for us. Not only do I now know that I can run 13 miles without stopping for more than a drink or two, but now I've destroyed my Half time by 45 minutes, and I'm feeling really confident for November 18. Of course, I'm also absolutely wrecked with nerves. I've never felt both so excited and so anxious for Thanksgiving Break! 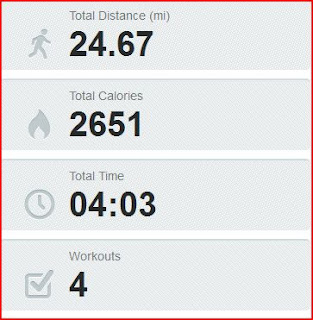 Anyway, after the 13 miles I came home and decided to stay on my feet to ward off sore muscles. A batch of chocolate chip pancakes later, M and I were on our way across the state for a wedding. Three hours in the car left me surprisingly spry, and I was even able to wear heels! I only experienced any pain when I tried to jump during the Cha-Cha Slide, or when standing up from my seat. As of today, I'm virtually pain-free, but we took today off and I was happy for it.


So this week was mile-heavy and really, really strong after a couple of weeks that fell a bit short. Two weeks until the Half! Crunch time!