I am not usually an impulsive person. I wouldn't really say I'm Type-A, but I'm definitely borderline. Still, I've found that in my quest to become a better runner, I sometimes let my feet jump in before my head can get in the way.

(What can I say? Apparently I love trying new things and pushing my limits...who knew? I certainly didn't!)

That's exactly what happened Tuesday. I arrived at school at 7:30 and immediately received a text from my assistant principal:

Before I could stop myself, I was opening a new text and doing two things that absolutely terrify me: 1) conversing with an absolute stranger out of the blue, and 2) tentatively saying "yes" to joining her Ragnar team. I promised to be in touch after I'd done some research.

The only reason for being tentative was the price. Everything else in my body seemed to just have an immediate, visceral reaction to this opportunity. YES! the running part of my brain screamed, DO IT!

Easier said than done, of course. I had no time to look into it the rest of the day, and in the evening I looked up details and discussed the race with Matt. He was interested in joining as well, but as his decision vacillated, ST (the team founder) texted me again: 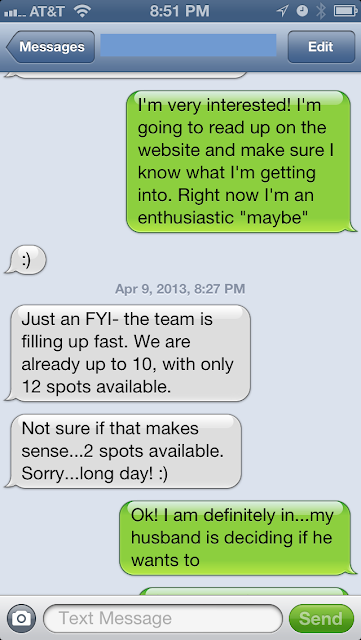 I responded immediately that I would join for sure, and I'd pay ASAP. (Matt decided that if they needed a 12th, he'd consider...Bless him for getting into running, but it's still not his top priority, love, and obsession.)

So here I am, joined up, paid up, and officially looking forward to my first relay race! ("Relay race" sounds so juvenile and simple, doesn't it? Oh, if only...)

Because my AP had sent the message to other "serious" runners at the school, two other ladies from work joined the team as well. I saw one the morning after the Big Decision, and we both simultaneously gave a little yelp and dance to the tune of "Oh my gosh are you signed up I'm so excited I paid today WHEEE!"

I'm so excited and terrified to do this, but it'll be a little easier to know at least two others on the team.

I'm quite proud, actually, of my chutzpah. I mean, getting in touch with a stranger to run an overnight relay race of 14+ miles with other strangers? Clearly running has either warped my brain, or turned me into one courageous lady. Maybe a little of both.

Tell me about a running experience that pushed your boundaries and was fantastic!

What do I need to know before we begin training?

What's the secret to a successful relay race team name?