This weekend was our Sup 'n Run relay! Matt and I arrived in Melbourne after 9pm on Friday, checked into our hotel, and grabbed some Panera for dinner.

The race venue was only five minutes from the hotel, and the race didn't start until 10am. I'm assuming the late start was for the SUP portion, but an 8am start would have been preferable due to the heat. I'll get to that momentarily.

I had 3/4 of a protein bar and a small Fuji apple for breakfast, and ate three or four Chomps 15 minutes before race time. As far as breakfasts go, it was skimpy, but I hadn't really planned ahead very well for eating while traveling. 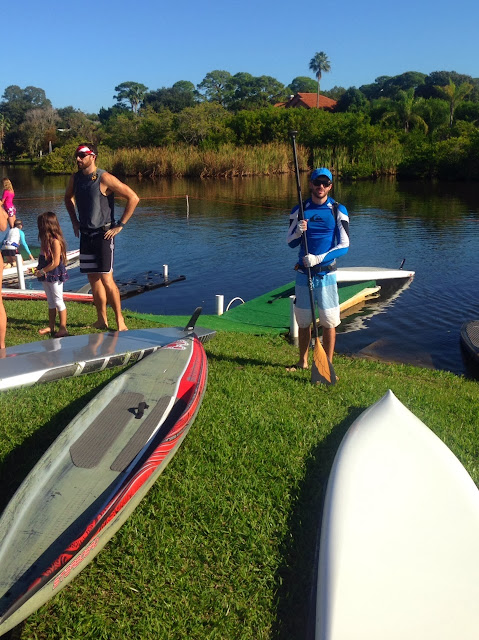 At the venue, the race director showed us the course for the paddlers and runners. The divisions were split by SUP AND Run and SUP OR Run...Matt and I were in the latter, because he'd paddle the entire race and I would run it all. (Other teams would trade paddling/running at each exchange.)

Our divisions were separated further by board type and combined-age. Matt's portion of the race was four miles on the water; mine was eight on land. We met at miles 2, 4, 6, and 8, then ran across the finish line together. At the beginning of the race, I wore three red bracelets, and we exchanged them at each meetup so that by the finish line, Matt was wearing them.

I was worried about getting lost, and the race was very small, but the organizers had done a great job marking the course, and there were volunteers pointing the way at all the tricky turns. I only got turned around once, and a fellow runner quickly sent me back the right way.
The hardest part of the race was the heat; it was cloudless and in the mid-80s during the entire run. Very little of it was in the shade. The minute we got to the venue, I stripped off my compression sleeves; the fewer clothes I was wearing, the better.

(Sorry...I know so many of you are braving sub-zero temperatures right now! I'm not sure what Florida is thinking, but someone needs to remind my backwards state that it's DECEMBER!!)

My legs felt fantastic, but three miles into the run - after our first exchange - I could feel my heart-rate getting out of control. I was having trouble breathing. I took extra time at the second exchange to drink more water and pour some over my head.
I began setting run-walk goals for myself, taking breaks where the paths were uneven or steep or where the sun was strongest, and running hardest where trees or houses blocked the sun and provided some semblance of shade. I dug in at the last mile and ran the entire thing because I hate walking in the last mile of any race.

I like to be able to run an entire race without walking at all, but sometimes we need to assess the situation and make smart choices. Choosing to be smart is sometimes harder than pushing through, because of the disappointment that goes along with it, and this feeling that we're "backing down".
I know I can blame the heat and being on antibiotics for strep for how tough this race was on me (why have I been sick for two of my last three races?!), but I kind of hate chalking it up to that. If I had trained better and hadn't let volleyball and my schedule get in the way, I know I could have performed at a more satisfactory level.

I can't do anything about it now; I'm glad we went to the race and I had a great time. Being disappointed in the outcome is stupid because the experience itself was such a great way for Matt and me to enjoy the sports we love together.
After the race, there was a delicious spread of homemade chili and Florida beer. Matt and I placed first in our division and we both won raffle prizes of gift certificates for Road ID bands.

This race was a learning experience. At our second meetup, I told Matt I didn't think I could finish. By mile 6, I had resolved to finish strong and had found my second wind. I now see that I need to work on training for hitting the wall and working through less-than-perfect race conditions.
Post-race, we enjoyed monstrously huge Mexican dishes and some necessary libations. We saw The Book Thief after. (I admit I haven't read the book yet; the first chapter failed to catch my attention, but the movie was poignant and beautiful; it spoke to the writer and book-lover in me. I'll take another crack at the novel, and I highly recommend the film!)
Today, we had breakfast overlooking the ocean at our hotel, then got back on the road to head home.
As we were driving through the middle of nowhere, we passed a runner who must have been on an ultra-long run. There weren't any houses or stores for at least 15 miles in either direction. It was kind of an awesome sight to end our trip.