This is too long, and I apologize in advance. If you scroll through and just read the captions, I wouldn't blame you.

One of the women in my online running group told me, "It doesn't matter what you pack as long as you bring a positive attitude." This became my mantra for the entire race, and I think it saved my van. We were all so encouraging, supportive, nurturing, and kind to one another. I never once felt like I needed alone time. I never felt frustrated or annoyed. We had the good luck to mesh perfectly under the pressure of the race. I haven't felt this kind of bond and camaraderie since joining my sorority in college.

We left for Miami in the early evening and arrived for the safety briefing just half an hour before it ended. On the road, we experienced our first taste of Ragnar as a van of men honked and flashed us as they drove by. During the ride we realized everyone in our van works in (or used to work in) education. Can you guess how we bonded so quickly? 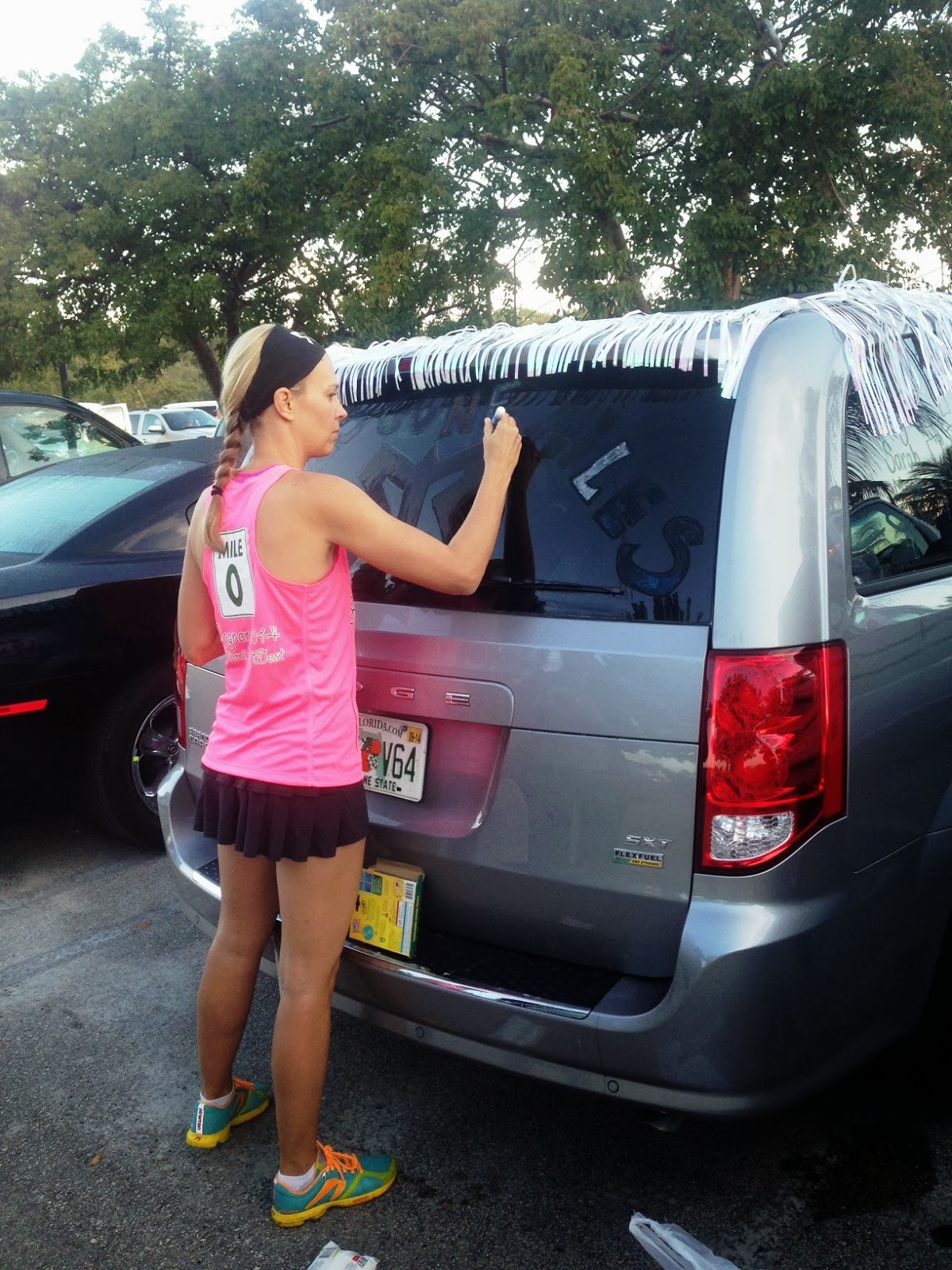 We arrived at our hotel to discover that they hadn't realized there was a giant race in town and had overbooked. We had no rooms.

Luckily, Kristin knows some secret codes and we were transferred to a nicer hotel for free...but we soon discovered they, too, were overbooked. Finally, we figured out a way to fit 12 women into three hotel rooms (with six in ours!) and got some rest before the big day.

This could have been a disaster, but positive thinking prevailed and none of us were the worse for wear after this ordeal.
Friday

8:00am. We're at the starting line, using the bathroom for a millionth time, quickly becoming used to the treacherous conditions that are porta-potties. (We should have kept track of how many times we used the bathroom. Our rule became: if there is a toilet available, USE IT.)

Kristin was our first runner. This was all new to us. We'd never done Ragnar before and hoped our plan for meeting each other at the exchanges worked out. We had decided weeks ago to use a GPS tracking app made for families, and it worked like a charm.
At exchange 2, I got to meet Laura, a member of that same previously-mentioned online running group. By the time the first exchange passed, things began to flow smoothly. We now understood how to find the next exchange, meet our runner, pass the bracelet, etc.

The major downfall was the heat. Our lovely Florida winter had melted into an early spring, and we dealt with temperatures in the 80s both days.

Hilariously, on our way to meet Sarah at the end of her run, we missed her because she ran faster than we could drive through traffic! (Blame the bad Miami traffic and credit her awesome speed!)
Thursday flew by in a weird blur...The day felt simultaneously like the longest day of my life and also the shortest. It was insane how fast those six legs seemed to go.

When it was time for my first run, I barely had time to strap on my water and set my Nike+ before Trisha got to our exchange. She slapped the bracelet on and off I went! My first leg was a mere 2.7 miles, but the heat made it tough. While I killed the first mile in 9:16, I got stuck at two long traffic lights that added six minutes to my time. Still, I finished in just under 28 minutes, which was exactly where we had planned for my pace to be. 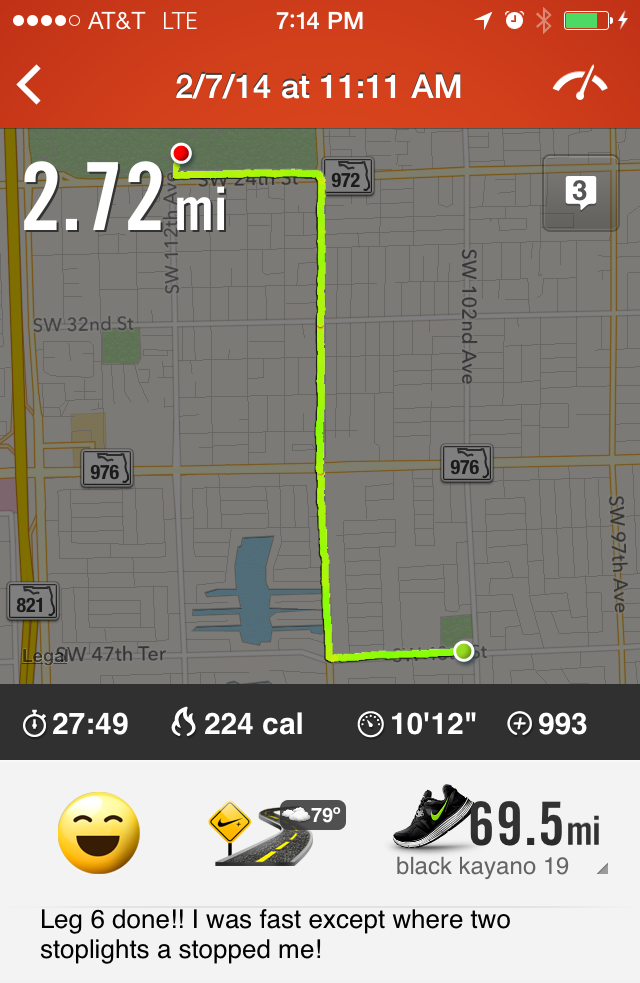 (Something I learned from Ragnar is that conditions may not be perfect, but sometimes you have no choice. Do I like running in 85 degree heat while the sun blasts me? No. But I did it, and I was awesome. We all were.)

After our van finished round one, we stopped at a BJs to eat. By this time we were all exhausted and hungry, but none of us ever seemed to crack under the stress. We were accommodating and understanding, and once we ate, any hint of a sour attitude disappeared. Food is magic. The handicapped stall felt like a luxurious bath-house. I "bathed" with baby wipes, changed clothes, and devoured a gluten free pepperoni pizza.

At this point, our van's decorations were becoming a symbol for our bodies.

Our next round began at the Homestead-Miami Speedway. We partook in some glorious free massages while we waited for van 2 to meet us.
These nighttime runs were a different kind of challenge than our early runs. Kristin ran through pitch-dark urban streets and past a penitentiary. Meg and Sarah ran on a dusty, rocky canal road. Margie killed a 12 mile bridge run. Trisha ran down dark, slanted sidewalks. My 7.8-miler began just before 2am.
If I hadn't had time to stop at 7-11 to pick up a Starbucks Double Shot Espresso, I would've been toast. But the caffeine set in just when I needed it, plus I got a surprise pick-me-up.
Throughout the run, I passed vans from other teams. They cheered for and high-fived me, prompted me to overtake the runners ahead of me, and kept me going when I felt my energy waning. The feeling of fellowship and connection is indescribable. 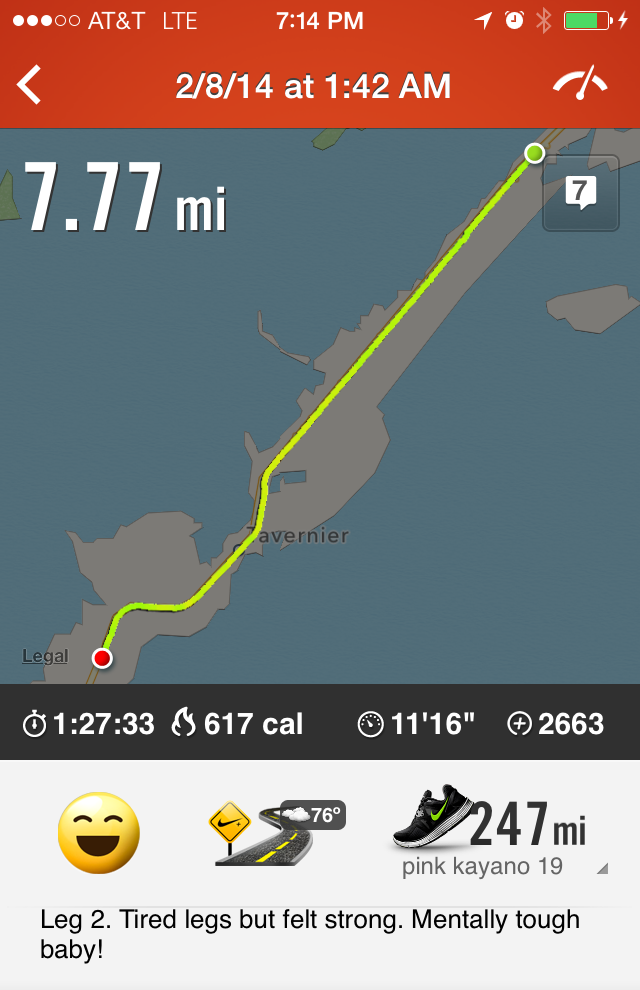 At the end of my run - when I had overtaken those runners ahead of me I mentioned before - there was some confusion. Apparently our team was behind on time and we were concerned about finishing before the finish line closed. But van 1 was done, and it was up to van 2 to figure out what needed to be done.

We had other fish to fry. Margie had been throwing up since returning from her run. We had planned ahead to get a hotel in Marathon near our morning exchange with runner 12. Meg drove the rest of us, who were basically comatose, and we took desperately fast showers and passed out for a mere three hours of sleep.

This was the most brilliant thing we could ever have done. Somehow three hours revitalized us. We awoke feeling strong and pumped. Margie felt worlds better. We were looking forward to our final round of runs!

We arrived at our final exchange much earlier than necessary. When Kristin finally got to run, she was so excited to get going she took off with a scream. She PR'd her distance and set us all off on the right foot.
Meg had volunteered to run the 7 Mile Bridge (part of a 9 mile stretch) in honor of her dad, who passed away last year. By the time she ran at 9:30, it was already cloudless and nearing 85 degrees. But she persevered and owned that bridge and came in right at the estimated time.

Sarah took off for her own 10 mile bridge run in that same heat. She never carries water, and we were worried, but as usual she showed us what an awesome runner she is by coming in under her estimated time.

Margie's final leg was four miles without van support (we weren't allowed to stop and bring her water) but by this time all sorts of vans and good Samaritans were stopping to hand water out their car windows. We were able to provide some ice water to her and some other runners.

Trisha ran her last five miles to meet me for my final leg; it was a virtual exchange, so when I saw her across the street, I just bolted. I was so hyped up and ready to get it done.
I plowed through my first mile at an 8:58 pace, ignoring the heat. When my path turned onto US-1 and I was running on asphalt, the only thing distracting me from the baking heat was the simple truth that the faster you run, the faster it's over. I couldn't let my team down. I dug deep to keep my pace fast. 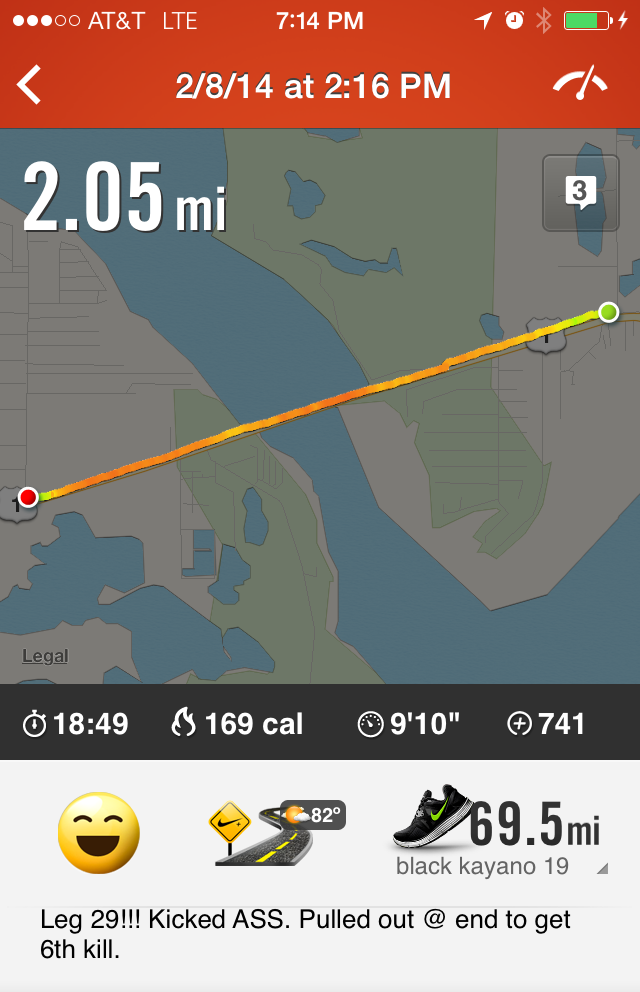 As I neared the exchange, I saw the woman in front of me dancing and waving her arms at her teammates; she thought she had finished and was golden. I knew, in that moment, that I had to catch her. I stealthily closed our distance. I stalked her like a puma. When I was within sprinting range, BAM! I struck. I took off like a rocket, grinning maniacally, and finished to shouts of, "How is that even possible?!" from my teammates.
Matt had made it to the finish there, too. We took photos at our final exchange number and trekked back to the van. I was elated. I had done it. I had run all three of my legs, given it my all, and accomplished something insane.

We all did.
Friday Evening

After some deliberation, we went to eat before changing. We had drinks and lunch at the Conch Republic in Key West, then found our hotel (an adorable old house called Courtney's Place) and got ready for the finish line.
We met van 2 at the finish in perfect timing to meet Daniella as she finished her last leg and led us through the archway. We were Ragnarians!
We placed 6th out of 12 in our division and the race took our team just over 34 hours.
We had dinner at Burgerfi, took photos at the 0-mile marker, and collapsed into bed. I'm not sure who those people are that can really party after Ragnar, but we weren't it. We were wiped!

It's amazing how the smallest things can make your day. Gas station coffee...Honking at a runner to encourage them, and then realizing belatedly they're not running Ragnar...A perfectly timed comment that sends everyone into hysterics...Discussion of how to pee while running...Becoming "bona fide serial killers"...Off-roading in a mini van...Walking around with rolls of toilet paper and asking to bum some from complete strangers. (Seriously, where else but at races do you see this?!) Hearing, "Good job, Runner!" from dozens of strangers...Watching your teammates cry from happiness and pride, embrace bloody feet, and sharing in someone's greatest accomplishment...Realizing in the middle of my late-night run that I had trained for this exact situation, with a 3-miler back-to-back with an 8-miler...Seeing Matt on my longest leg.

Ready for some deep thoughts? Here we go.

The point of Ragnar is to see how far you can push yourself, to overcome, to be strong. Giving up because you're tired isn't acceptable. That's the whole point. You run. It hurts. You finish. You don't die. You realize how strong you are.

You do it for the team.

On my last run, as my legs threatened to buckle after so little sleep and so many miles in such a short time, it wasn't the promise I had made to myself that kept me going. At least, it wasn't that alone. It was knowing that my team needed me to leave it all out there for them. I felt responsible for them. I wanted to give them my best and make it count.
I am filled with gratitude and love for every person who helped me get to this point. I can't put into words how much the encouragement of my family and friends has bolstered me and helped me to realize that I've done something great here. (And yes, I know just how lucky I am to have a husband who will drive 5 hours to the Keys to catch brief glimpses of me during a race.) 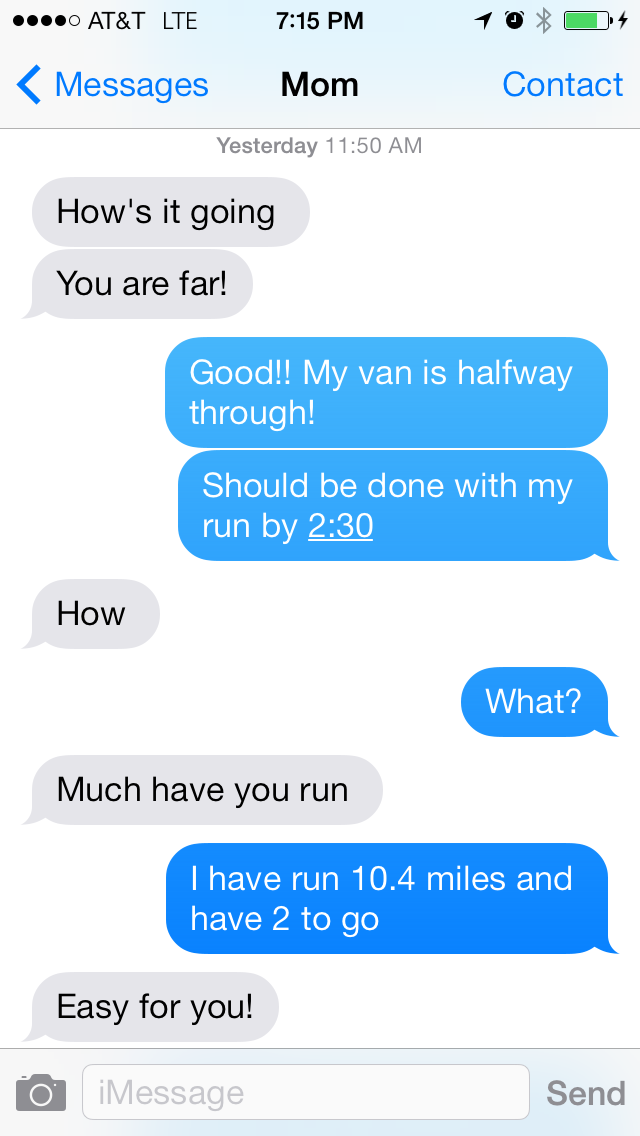 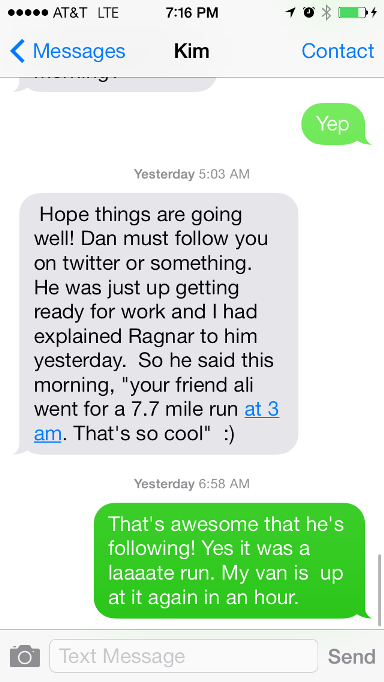 I was worried Ragnar might burn me out, but to the contrary, I'm actually more motivated than ever. My legs feel amazing. I am so ready to run my half this weekend to celebrate my birthday. 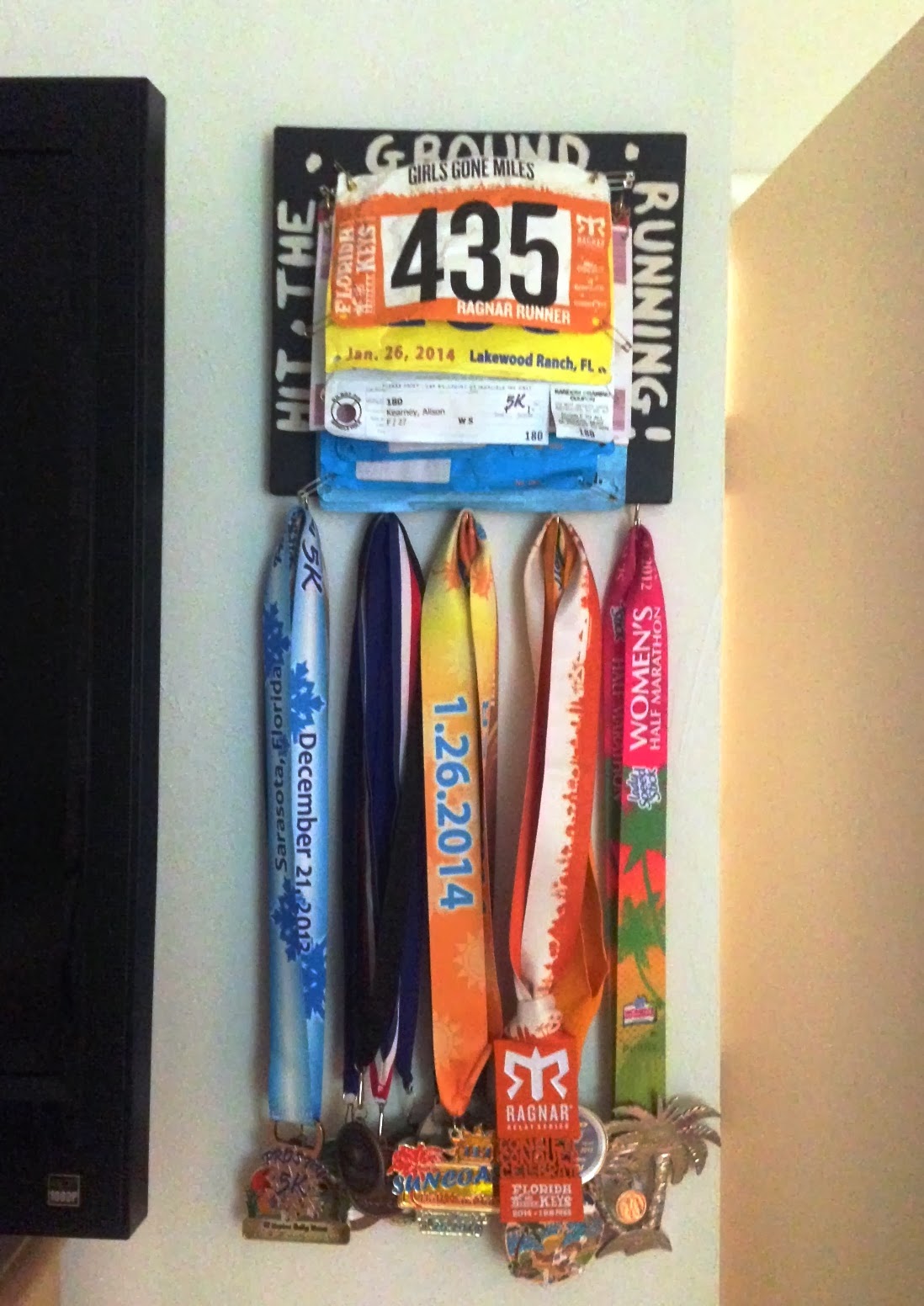 I can't wait to do another Ragnar. Maybe I'll even do the ultra next time. If this sounds even a little bit interesting to you, I can't urge you strongly enough. DO IT.