Check out my previous posts on the first and second days.

The final day in Minneapolis flew by. We met in the lobby of the Hyatt Regency at 7:30am and rode over to Target Field. We took the elevators down to the clubhouse level and the leagues divided. The AL went out onto the field from the 1st base entrance.

Here we learned that the ceremony had been practiced ad nauseam using stand-ins for all the players, coaches...and us!
It was cool to see how the All Star Game is practiced beforehand; we got to hear the announcements before they were finalized and see how the ginormous flag is brought out. (Each strip is a separate section that's bagged up and stored individually; they clip together underneath!)
We practiced walking on to the field. Imagine our surprise when we realized that Idina Menzel was already there and ready for her rehearsal! She was incredibly nice as we all broke ranks to take pictures; teachers truly make the worst students. Once properly chastised, we practiced walking a couple more times. Idina stood right over my shoulder during the playing of the Canadian National Anthem!
From the ballpark, we returned to the hotel and got ready for the All Star Parade. But first, there was a surprise! Dr. Jill Biden - yes, the vice president's wife - came to see us. As a teacher, she wanted to show her appreciation and thank us. She took photos with each of us, and then with us a a group.

The coolest part? She sat on the trolleys with us during the parade and watched the game with us in our suite! 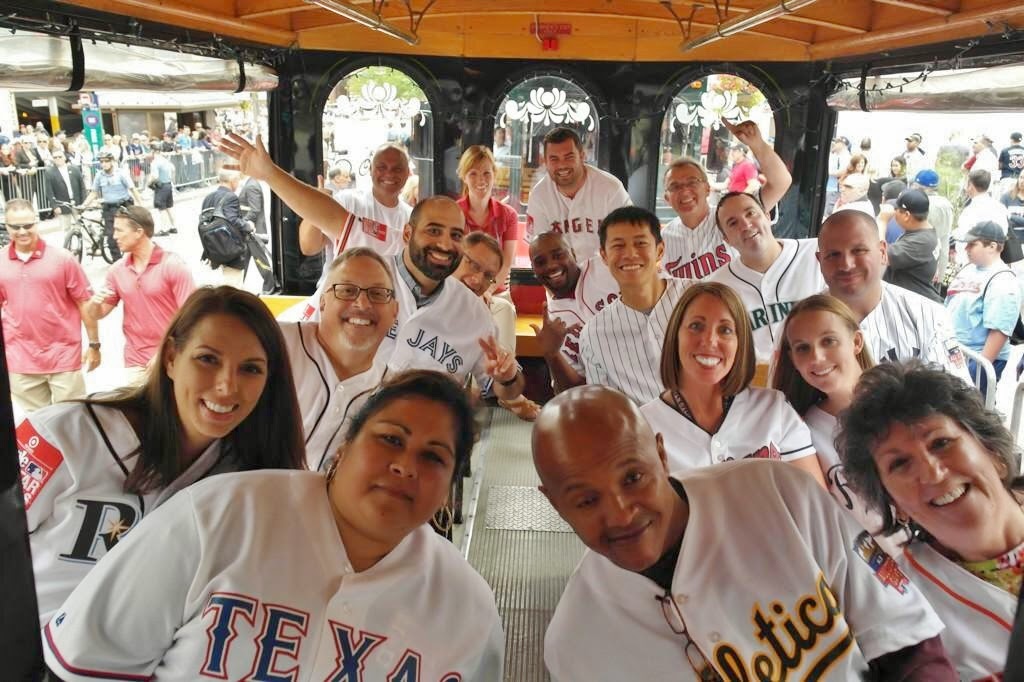 Anyway, the parade was maybe the most emotional part of the entire trip. As I waved at the crowds, I barely held back tears as parents and children shouted, "Thank you, teachers!" and "You deserve this!" and "We love our teachers!" Any teacher can attest that this kind of outpouring of appreciation is unheard of. As I made eye-contact with parents as we drove by, I could see the sincerity of their sentiments.
After the parade, we had a little time to eat and relax. I crawled into bed and had room service bring hot chocolate and coffee.

During this time, Matt was at the ballpark with some of the other winner-guests enjoying a special pre-party. When we arrived at the park, he found me as we filed through security. It was nice to get to see him quickly because my nerves were starting to set in.

In the downstairs clubhouse, we sat around and chit-chatted. It was so nice to just have a moment to sit and enjoy the company of the wonderful, talented teachers I was with. We got to work exchanging Instagram and Facebook accounts so we could stay in touch after the night was over.

Finally, it was time to line up. We waited outside on the ground level; seats of fans overhead shouted and waved. We were flanked on either side by children from the Boys and Girls Club who had been chosen to take part in the ceremony. If I leaned really far back, I could see Matt in our box overhead. We waved and blew each other kisses.
That particular shot was the one I kept seeing on Facebook as my friends took pictures of the TV and sent them on to me!

As the announcer began his spiel, we walked out onto the field. I spotted myself on the jumbo-tron and did a double-take. We filed past some of the MLB's greatest players. As Idina began to sing Bob Dylan's Forever Young, my lips and chin quivered; I did my best not to cry or look totally stunned. I had a clear view of Derek Jeter directly across from me on one side, but was too intimidated to hold eye-contact. (His eyes are super piercing and even bluer in person!)

When the song ended, I felt relief. We could clap and relax a little. We turned for the National Anthem and then exited through an archway of flags held by the aforementioned children.
Once inside, we cheered and hugged and made our way upstairs to our suite to catch the first pitch. It was here that I heard I had made it on TV for a good amount of time. My phone was going crazy with Facebook and Twitter notifications.

I'll admit, it was hard to concentrate the rest of the game. I could hardly eat, even though the food was amazing. We kept getting called into the suite for pictures. Idina came up to take photos with all of us and Dr. Biden. During the game, Jackie Robinson's daughter Sharon Robinson (who is MLB's educational consultant) came to talk to us about Breaking Barriers. Hall-of-Famer Ozzie Smith was also in our suite and Matt got a chance to meet him and get an autograph.
To top it all off, the AL won the game for the first time in a couple years, so I was thrilled!
After the game, Matt and I spent some time in the lobby of our hotel because that's where all the players were staying. I was able to meet Chris Sale of the White Sox and Jose Bautista of the Blue Jays, and we saw Robinson Cano, Josh Donaldson, and various other players. I wanted to see David Price (because, obviously, he was there for the Rays), but we never got a chance.
So what have I taken away from this experience (besides autographs)? That teachers aren't alone in thinking that we're crucial to the future. That there are actually those outside of education who respect and admire teachers. That I can rest assured that there are teachers across the nation (and Canada!) doing great things for their students and their communities. That maybe I need to learn to accept compliments and my accomplishments as what they are instead of trying to explain them away or attribute it all to luck.

I will never forget this experience. It will carry me through the hard days at work and it will help me to appreciate the good days. I will cherish forever the chance I had to meet these other teachers who put my meager accomplishments to shame.

I will forever be humbled and grateful for this experience. I will carry it with me always.

No questions...just share your thoughts!
ABK
Posted by Ali K.