Tuesday's recovery run was the perfect example of why "recovery" means "easy pace". I took Sunday and Monday off after my 15-miler and my legs felt amazing, but after two miles Tuesday they were wobbly as hell.
I guess as awesome as my legs felt, they were still a little tapped from the long run. At least the view was pretty, and there was a nice drizzle. 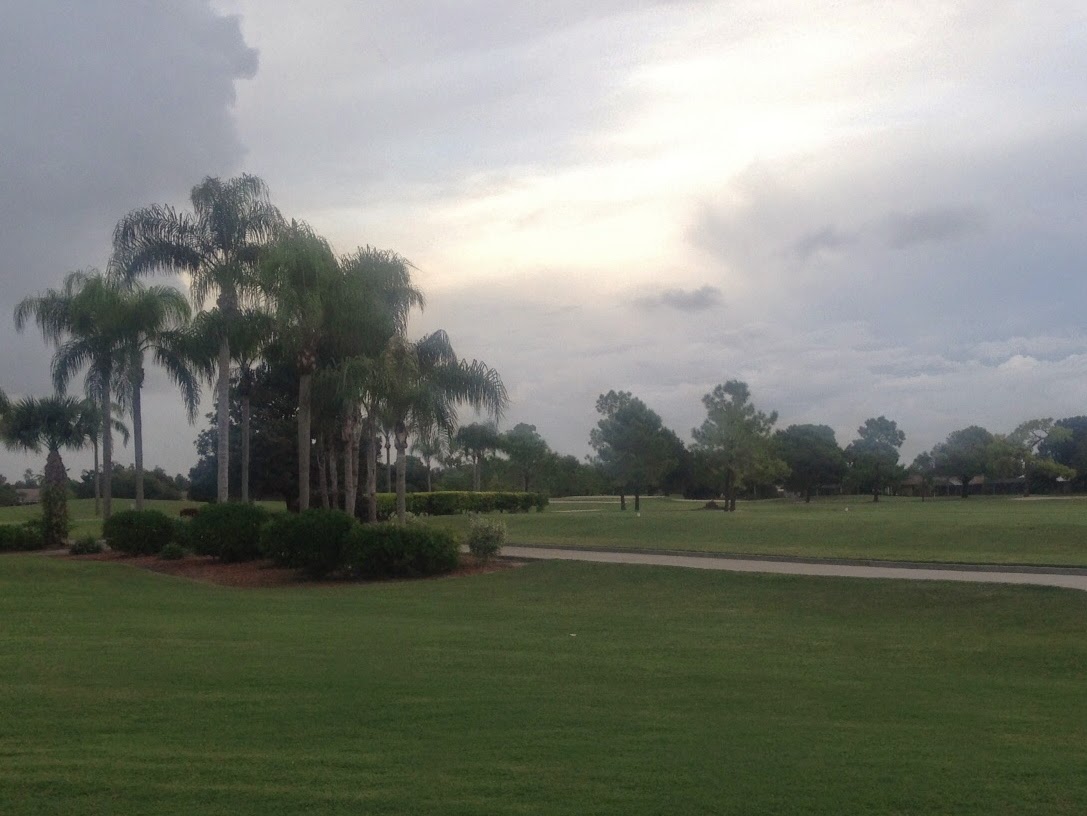 Anyway, I'm super excited for this weekend. Tonight I picked up my race packet for Sunday's race and seeing the medal on display and getting my bib just reminded me of how much I love racing.

It's been since April that I've raced, and part of me has been thinking I'm kind of over it. I had to skip a bunch of my usual fall races because we've been trying to spend wisely, and I don't really mind making that sacrifice.

But wow, am I excited to toe the starting line twice this weekend!

The something old race is the Sanibel 10k I've done twice before (in 2012 and 2013). I love the route and the cause. The something new race is the Rocktoberfest 10-miler. I've never run a 10 mile race before (the 15k I did last year was close I guess), so it's not only a new race, but also a new distance...automatic PR, right?
More than 50 members of the Sub-30 Club are in PA for the Runner's World Festival. I couldn't make it this year, but luckily someone had the bright idea to send flatties in our places. Flat!Ali is already enjoying pho and good company thanks to Patricia!
I also picked up a belt to try out over the next few weeks before the marathon. I'd like to be able to put my phone in the belt and have room for Gu...I've been chafing under my armband and the velcro is giving up, too, so I definitely want to avoid wearing it for like...six hours of running.

On a different note, this week has been rough...not running-wise, but work-wise. Sometimes I just feel like I'm missing the mark. Once in awhile, especially when report cards loom, all I can think about is sleep. (Yes, quarter 1 ends Monday. Isn't that crazy?!) This is a candid Matt took the other night:
When Matt showed me this I nearly died laughing. I was so exhausted I fell asleep and stayed asleep for over an hour with the light on and the bird on my face!

After a couple good nights' sleep, some wine, and an incredibly therapeutic bridge run with Kristin, I'm feeling much better.

When is the last time you raced?
What's the weirdest place/position you've slept in?
What makes you feel better after a rough week?
Photos of you sleeping: cute or creepy? I'd say creepy 99% of the time but this one is acceptable because it's really more of Archie than myself.