No Rest for the Race Crazy

After an enjoyable rest day Monday, I was back into training Tuesday. This weekend, Kristin, Mari and I are going to Tampa to run the 15k and half marathon at Gasparilla!
I feel a little insane to be running 22 miles this weekend, but we all just want to go and have fun. I haven't had a girls' weekend away in over a year, and I'm really looking forward to it! We originally wanted to sign up for one of the challenges, but they all sold out, so we just signed up for two races instead.

Kristin and I ran Tuesday. My calves were pretty tired but overall I felt good. And she brought me a treat! Gluten free Girl Scout cookies!
In other awesome news, signing up for free stuff at the A1A race expo paid off! I checked my phone after work today to find this text from Matt:
I never win anything and I've been wanting LASIK for years. The worst thing about running early in the morning is sticking my contacts in (hashtag runnerproblems, right?); I can't see a dang thing without them. I have my consultation March 7 and I'm hoping I'm a candidate and will have fixed eyeballs by spring break!

Sign up for both the A1A and the Space Coast marathons has already opened. I really want to run the full at Space Coast again, but I'm waiting to sign up. Matt has expressed some interest in running a half with me, so I'm hoping to get him to sign up for the A1A next year with me. It's on Valentine's Day next year, so it would be such a fun race to train for and run together!

I have a lot of big-distance races in the near future. The more I run long-distance, the scarier 5ks seem. But I'm looking fear in the face and running Kristina's virtual race! 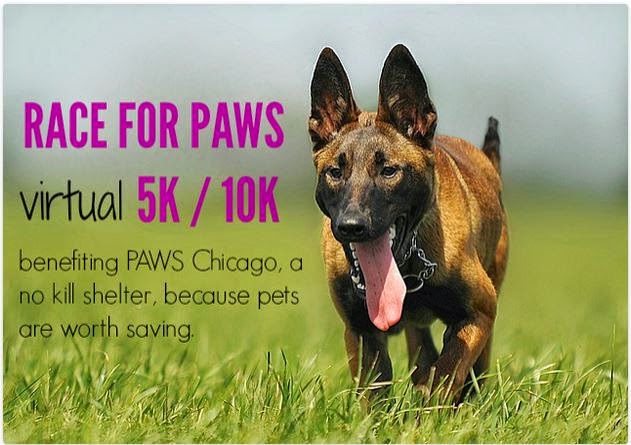 The funds go toward her fundraising for the Chicago marathon and help a really good cause: PAWS Chicago. C'mon...how can you say "no" to that happy puppy?!

How's your eyesight?
What's your favorite Girl Scout cookie?
Do you ever sign up for races just for the medal?