I had really been looking forward to this race! Last year, when early-bird pricing opened, Sean gave me the heads up and I snapped up my entry without really thinking about it. I knew it was a well-established race with a good reputation and it was local to my parents, which would make travel easy.
Saturday afternoon Matt and I went to packet pickup downtown. I had planned to go earlier but Matt was working on my mom's car. I was lucky to run into Mari because the line curved all the way around the block, and I was able to slip in and wait with her.
Because this was the 10th anniversary race, we received beautiful, lightweight running jackets along with our shirts. I can't wait to wear it this summer when hurricane season hits.
We had sushi for dinner, as is my usual, and I managed to fall asleep at a decent time.
Sunday morning arrived, and everything was rolling smoothly along. We got to the race site and parked without any trouble. I had my usual breakfast, but my stomach was being a little grumbly so I took half an Immodium. The biggest problem of the morning was the weather; it was already 70 and humid forty minutes before the race began.
The race started about ten minutes late, and by that time I was really itching to get moving. The first mile took a  lot of dodging and weaving, and then we were at the dreaded bridge. The first ascent was fairly easy except for how narrow it was! I was bumping into people all over the place.

I saw Sean and Mari on the descent; both looked strong.

We rounded St. Armand's Circle and came right back to the bridge. The second ascent was much harder, but I told myself I would run a race to be proud of and I didn't let myself walk. I did pause at the top to snap a picture of the sunrise. 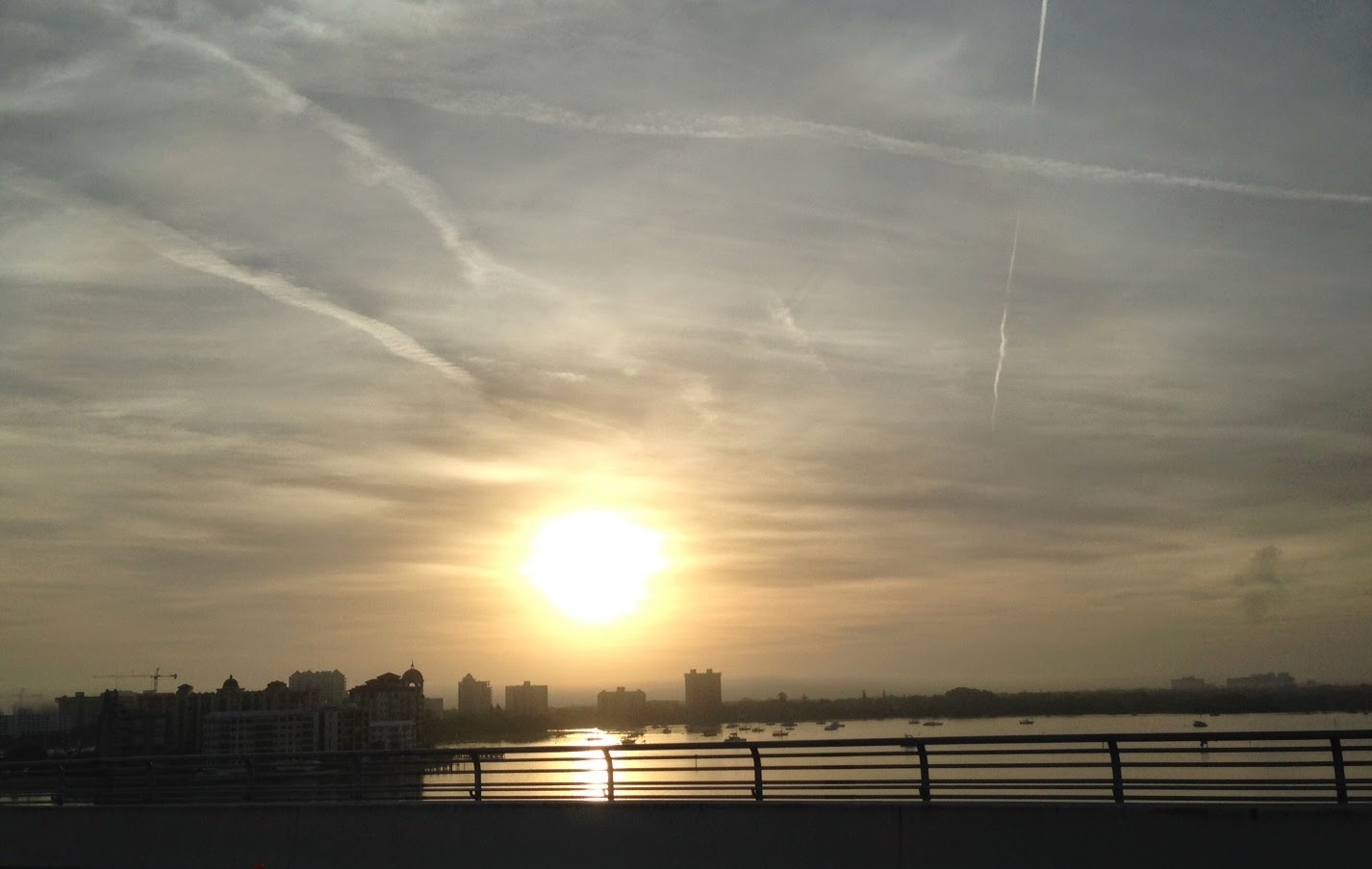 As I began the descent, I spotted Matt off to the side and made a beeline toward him.
Not long after I had passed Matt, someone drew up alongside me. "Excuse me, have you heard of the Sub-30 Club?" he asked.

I looked up and there was Will, a fellow Subber I'd last seen at Space Coast! He had been taking a walk break when he passed Matt, recognized him, and said hello; Matt told him I had just gone by. We chatted for a bit and then went on with our own paces, but we would be leap-frogging the rest of the race and seeing him on the course really helped me pull through this one.

By this time, it was really warming up. The next few miles (5ish through 8) were along 41, which isn't a very pretty route and was fairly narrow at times. The volunteer support and water stations were great. There were spectators handing out frozen grapes and fresh strawberries, and a few with water guns filled with icy water.

We turned in front of the Ringling Museum and the second half of the race went through a shady neighborhood filled with twisting roads. I began to lose my stamina. I had eaten a Gu at mile 5 but the heat was messing with my stomach and I couldn't fathom eating another, even though I knew I needed it.
I began to take walk breaks. (Part of me was disappointed that I was resorting to this because I hadn't planned to walk - I have nothing against those who run/walk, but I'm hard on myself if I take unplanned walk breaks in a race.)

I knew that the weather was a factor and for whatever other reasons this just wasn't going to be my strongest race. Considering my racing season over the last few months, I cut myself some slack.

I saw Matt near the finish twice (he had his skateboard and was able to catch me before the last turn and again right at the end) and was able to pick up my shuffle to a run and finish strong.
I got my medal and chugged a bottle of water. As I squatted off to the side of the finishing chute, I could feel my whole body pulsing.
Matt found me and we found Will and took pictures; it was seriously so nice to see him throughout the race! It's amazing what having a buddy on the course can do; I'm sure I would have walked earlier and more often if not for Will's presence.
We grabbed oranges and met up with Sean, who had been in front of the 1:40 pacer when I saw him, but he said he had had the same problem I did; he hit the wall hard and early. Still, he finished with an awesome sub-2 time.
After the race, Matt and I went to meet Jenn and her fiance for brunch at Another Broken Egg. I was excited to try their gluten free pancake (it was good) and catch up after not seeing Jenn since our trip to Panama in 2011!
Before going home, we made one more detour to pick up cupcakes at Gigi's and check out a huge tent sale at Fit2Run. We spent $21 and got multiple Camelbak accessories, light clips for running in the dark, a new Lija skirt (which was originally $80!), a set of three different kinds of resistance bands, and a medicine ball. I can't wait to add some new exercises to my at-home routines!


I came away from this race resolved to never run another half after February. It's just too hot in Florida by March. But I definitely feel like it was a good end to the winter/spring half marathon season.
Now I just have shorter races to look forward to, and my legs are definitely thanking me.