Even as a seasoned racer (in all distances save the marathon), I still get overwhelmed when looking at training plans. With a single marathon under my belt, I feel like I should have an idea of what I want to do again and what I want to change for training this time around.

But there are so many options! Each one has its own pros and cons so I'm going to break them down. This is really more for myself than anyone else, but many bloggers have pointed out there are quite a few of us who are training for marathons starting in the summer, so maybe this will be useful to others as well.

Hal Higdon: Hal's plans are good for various reasons. There are many levels to choose from, from novice to expert. I like that the plans allow for some flexibility and that his website gives you information on how to use the plans...That's actually one of the cons, though. He goes into a TON of detail explaining everything before you even see the plan, which can be helpful to some runners but feels overwhelming to me.
Hanson: The Hanson method for marathon plans is really intense! A huge part of me wants to be able to do this plan, but realistically I know it's probably not for me yet. Hanson plans consist of more than one long run in a week. This is great for learning how to run on tired legs, but if you're a newer marathoner they might not be for you. That said, I know many marathoners who absolutely swear by this method...I just don't think I'm there yet.
Galloway: I'll admit that I'm reluctant to look into using the Galloway method because I would rather not walk on my long runs. I know that I did end up walking for my last marathon but it was due to extenuating circumstances. I would like to be able to run the entire marathon. I think that realistically, I will be able to run it as long as I treat my body right during taper. Still, there are perks to Galloway's plan.
Nike: I had no idea that Nike had free marathon training plans until I was recently on their website and they were advertising them. While I do think that they look interesting and like a viable possibility, I don't like their setup. The plan is a set of "cards" labeled by number 1-7 (for days of the week) and general information on the workout; this plan is definitely missing the specificity I'm looking for in a marathon plan, but for a general running schedule it's pretty nice.
Smart Coach: This is the plan that I used last time and I really like it. I would possibly consider paying for the upgrade this time around so that I could make a more detailed plan, but even the free Smart Coach training plan is really good. I like that it's flexible and that I can make it a longer plan than the usual 18 weeks. The only thing I didn't like about the Smart Coach plan last time was that it was only three days of running and I would really like to work up to four days of running during training. (I think I can adjust this somehow by changing the intensity level.) 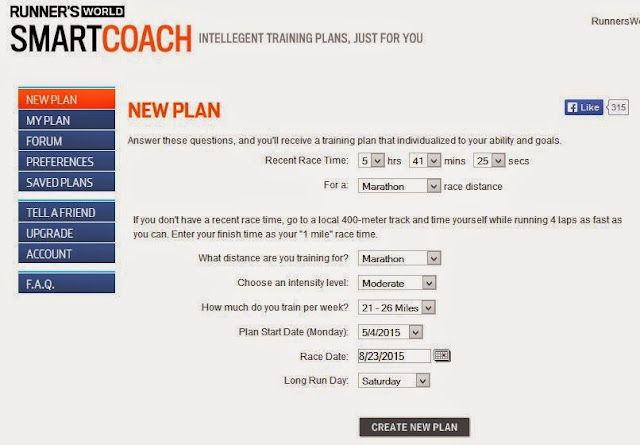 I'm glad I have time to decide what my plan will look like and to get some insights from other marathoners! There's a lot to think about this time around because I'd like to see an improvement in my performance!

What factors do you keep in mind when choosing a race plan?
Do you rely on a personal trainer for bigger races?