This summer, a student of mine (who's now a junior in high school - how does time fly like that?!) was accepted into an elite summer art program at U. Penn. While she was there, she spent some time browsing used book stores, and in her last week, she stumbled upon Haruki Murakami's memoir What I Talk About When I Talk About Running. She wrote me that she wasn't sure if it was any good, but it made her think of me, and she dropped it off at school during my first week back.

This was kismet! I had literally just added it to my reading list. It seems to be one of those essential reads, like Born To Run and Once A Runner, and I couldn't wait to dive in.
At first, the structure of the memoir threw me off. Murakami doesn't really write linearly, but as I got into the rhythm of his writing, I grew more comfortable with the stream-of-conscious style he seems to employ.

The foreword is titled "Suffering Is Optional"; that's how you know you have a good running book in hand. Runners know better than anyone that growth lies in discomfort, that you have to learn to "embrace the suck", as they say. But living through discomfort doesn't mean suffering. We can transcend pain and choose, in a way, to enjoy it. As Murakami writes: "Pain is inevitable. Suffering is optional." 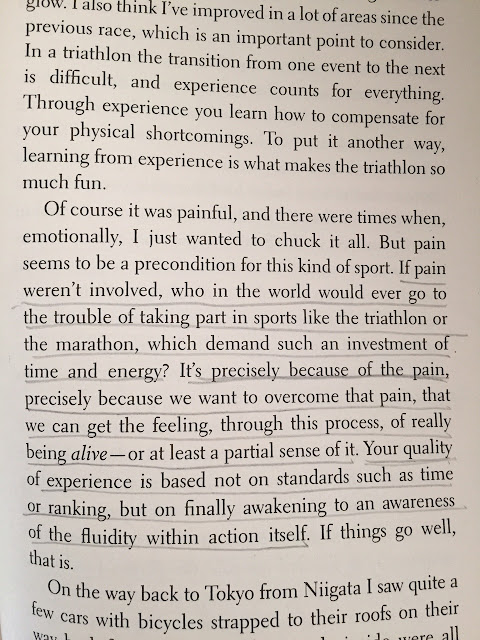 The memoir meanders through Murakami's life as a new runner, his music choices, and his dalliance with ultramarathons and triathlons. Within these memories, he has scattered little stones of wisdom to be picked up and pocketed. By page 11, I was reading with a pencil in hand so I could underline and annotate.

I won't go through every stone I myself picked up. I'm sure what spoke to me will be different than what speaks to others, but I think that's the beauty of this memoir. Its honesty and simplicity will speak, at times, to any kind of runner.

The strongest reaction I had was to chapter six, wherein Murakami recounts his first ultra at Lake Saroma in Hokkaido, Japan. Murakami's account of how his legs felt during his ultra is how I felt during my marathon! I guess that sheds some light on the difference between us, as if there were any doubt that we're not exactly the same kind of runner.

He writes that he had the desire to run on, but his legs had other ideas, grew "disobedient", and refused to move how he wanted them to. I read that part thinking, Oh, that sounds like mile 21! 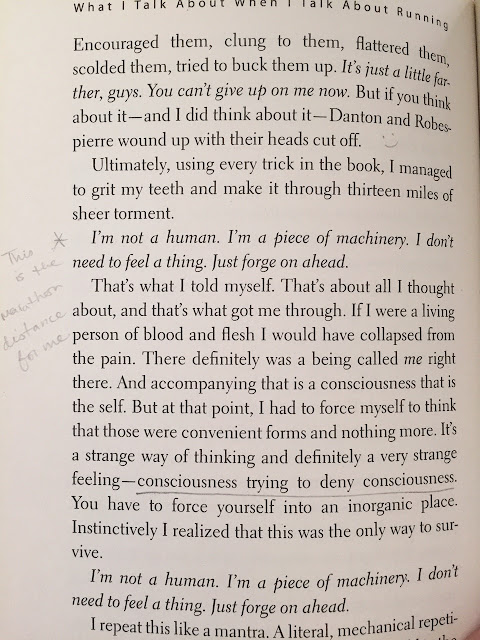 He writes of the ultra that, "You'd expect it to afford you a special sort of self-awareness. It should add a few new elements to your inventory in understanding who you are. And as a result, your view of life, its colors and shape, should be transformed. More or less, for better or for worse, this happened to me, and I was transformed."

And I think anyone who has ever run a marathon - or perhaps any race outside the realm of "normal distance", whatever that may be for an individual - can wholeheartedly agree. I came out of the marathon a different person than I was at the start. Somewhere along 26.2 miles, who I was as a runner and a person changed.

That's the beauty of distance running, and Murakami captures that beauty perfectly. 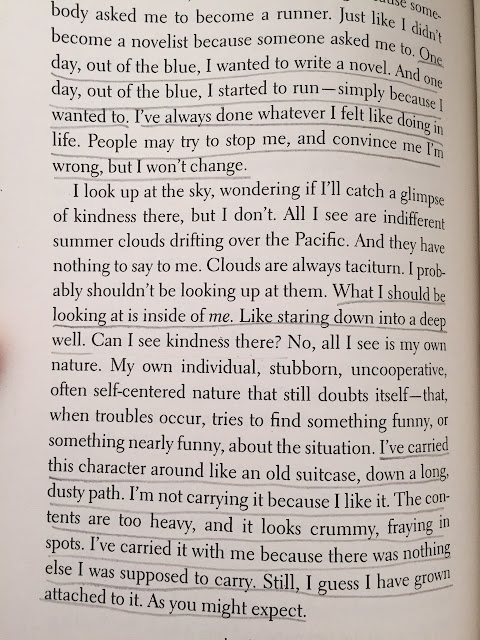 I will say that parts of the book dragged for me, but I think others would find even those parts engaging. This is one I'll pull out to read again, in parts, as I continue my running journey.

Have you read WITAWITAR? (Whew, that's a long title!)
What running book do you recommend I pick up next? I just started Meb for Mortals.

Email ThisBlogThis!Share to TwitterShare to FacebookShare to Pinterest
Labels: book review, books, murakami, reading, reflection, what i talk about when i talk about running, words