Up For Debate: "Passing!"

A few weeks ago, one of the women in my online running group posted this story about a Negative Nancy she encountered during a trail race: 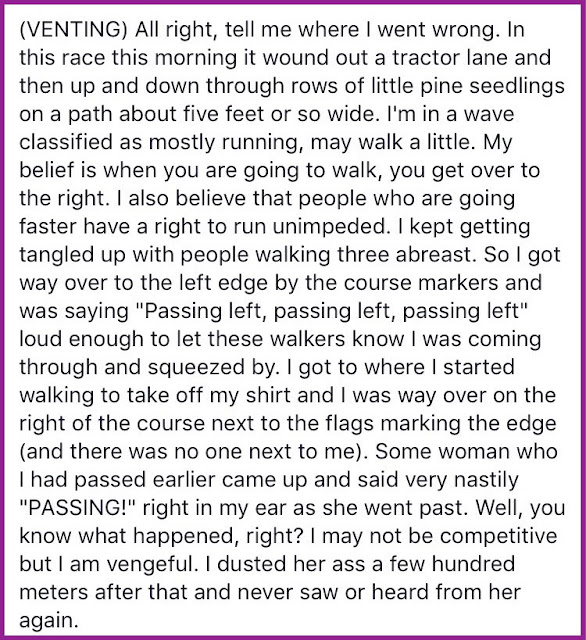 This led to a bit of a debate in the comments (all very cordial, of course).

Most of us were surprised that Negative Nancy was obviously so offended at being warned that she was being passed. Isn't it good etiquette to warn runners that you're passing, especially on a narrow trail?

Some runners, however, opined that they never warn that they're passing, especially in a trail race because headphones usually aren't allowed and their upcoming footsteps can be heard clearly. Still others said they only warn that they're passing if there's limited space to do so. A couple said that they cough or purposely make noise to passively warn runners they're coming, but rarely fully announce themselves.

Originally, I felt like I warn people when I'm passing 90% of the time. But the more I thought about it, I realized that that's not true. I only warn people if I'm going to have to make a narrow dodge between them, or if they begin to meander into my path at the last minute.
Either way, passing is necessary sometimes, and announcing you're passing isn't meant to be rude. But is it necessary?

Negative Nancy may have been having a bad day, or maybe the original "Passing!" comment sounded harsh because some of us tend to shout when we're running without meaning to. (I'm pretty sure I announced at the top of my lungs, "I'm stuffing ice down my shorts!" at BDR last weekend.) Maybe she was new to trail racing - or racing in general - and didn't know the etiquette; she may have felt singled out. There are many reasons for her overreaction, but the question remains: is announcing that you're passing necessary etiquette, or not?

What do you guys think? Do you announce when you're passing other runners? Do you prefer to be warned if you're going to be passed?