I hope everyone had an enjoyable new year. Matt and I were going to visit Jenn and Tommy, but I've been sick and I didn't want to infect everybody, so we ended up staying home. We nearly missed midnight; luckily the neighborhood fireworks alerted us to the time!
As I wrote in my first-ever blog post, and in some subsequent posts as the years have gone on, I became a runner when I made a New Year's resolution in 2009 and it actually stuck. Since then, I've had good success with taking the time to plan resolutions for the new year and actually following through.

Last year, that wasn't the case.

My 2015 resolutions fell apart early. I think I went wrong from the very beginning because I set these goals despite not really feeling them. They were things I wanted to accomplish, but not things I was truly feeling motivated to work toward. They fell apart, and I just didn't care to get back on track.
The end of 2015 left me feeling meh about the year, and I think it's time for me to rethink how I do resolutions.

I'm not going to set out specific resolutions this year. I've been getting more and more specific with my resolutions because I felt like SMART goals were the way to go, but I found that last year that really backfired on me. The specificity of the goals felt like a stranglehold; it was too easy to fall short.
Instead, I'm going to think about the big picture for what I want to accomplish and how I want to feel about 2016, and set goals that complement that. 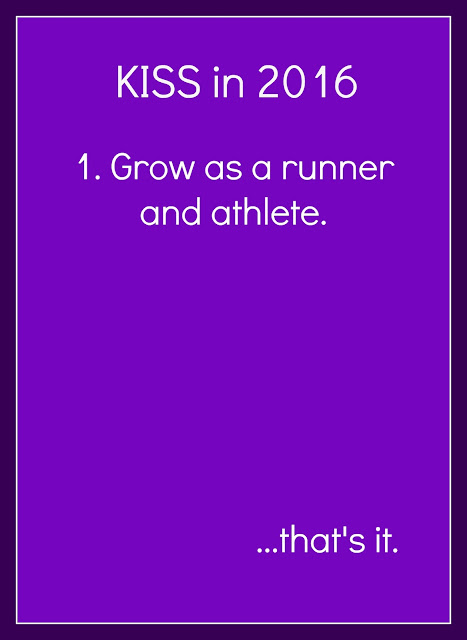 I plan to continue to make growth in my running. That means taking cross-training more seriously. I plan to continue being consistent in my workouts; that might mean taking time off from running, but filling the void with other workouts. I plan to make the majority of this year about shorter distances and speed, just as I decided in November. I want to end each week feeling pretty satisfied with my physical activity...but what creates that satisfaction isn't set in stone.

So that's it. No true resolutions. I'll put some more thought into races as the year goes on; for now I just have A1A on my radar. There's no reason I can't adjust and set more specific goals later in the year, and that's what I'll do when inspiration hits. Right now, I need some flexibility and freedom. Instead of following SMART, I'm going to follow KISS.

Are you setting goals for the new year?
Do you prefer specific goals or flexible goals?