I need to start this post by saying I spent 11 hours at school today...I think it goes without saying that I'm looking forward to the long weekend we have coming up!

Anyway, the other day Jenny Lawson posted about personality tests. I've never taken the Myers-Briggs test because I wasn't a business major in college and we English majors didn't bother with that kind of thing.

Still, I was intrigued when she posted, so I hopped over to 16personalities.com and took their test. Matt wasn't sure he agreed with the results, so I took it a second time 48 hours later. I got the same results. I guess Matt thinks I'm more emotional than I think I am! 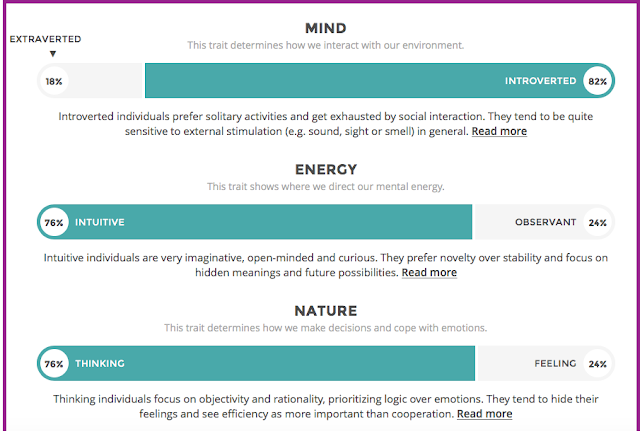 The differences in the tests were really negligible, so that makes it scientifically sound, right?

Anyway, some of the questions were really hard to answer. Like, in what situation are we really talking about here?
Some were easy.
The difference between the two quizzes was that once I was INTP-A (confident individualism) and once I was INTP-T (constant improvement)...which I think speaks to me pretty accurately. I'm scarily happy with who I am, but I'm always looking to improve!

The test results come with a breakdown of all kinds of information. It was fun to read about what kind of a friend I make (which was all very true - I'm slow to warm up but fiercely loyal once you're "in") and what I'm like in relationships (I wonder how Matt deals with me).

Here are some general pros of being INTP:
...And some cons:
Obviously, some of the personality traits felt spot-on, even if they weren't always positive.

I don't think I was always this way. Teaching has made me a little more analytical and a little more callous. It's made me more assertive and way more confident. I'm not as creative and emotional as I used to be, but I'm still an artist at my core. Seeing as I began running at the same time I began teaching, I wonder if running had anything to do with the change, too.

I wonder what my results would have looked like if I had taken it when I was 20, because I think my confidence and condescension were much lower when I was younger.

Have you ever taken the Myers-Briggs personality test, or any others?
What personality type are you, and what does it mean?
Do you think your core personality has changed as you've aged?