Sunday's run was just what I needed. I think there were two main factors that made it so awesome.

1 - I ran with Kristin, who I haven't seen in something like a month because of scheduling issues. I needed that!

2 - It was my first long run since A1A. We did ten miles, and I was so glad to get into double digits. And I was relieved, too, because we have this half on March 20 and I haven't gone longer than four miles since the marathon, so I was beginning to wonder if I'd be able to make it! 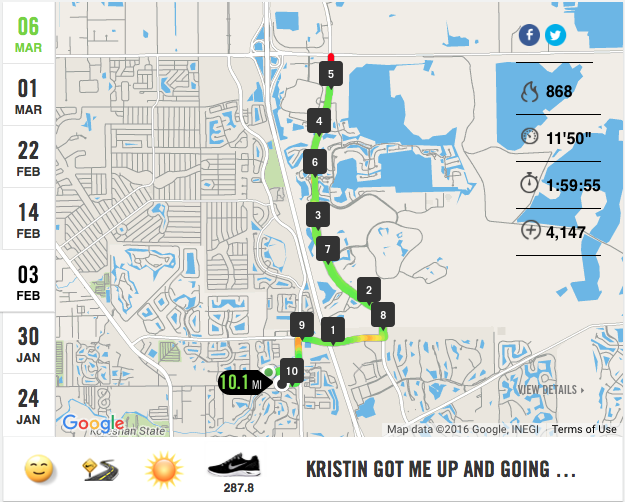 I know it's only really been two weeks since the race, but it feels like longer, and my mind starts to play tricks on me. Can I still run 13 miles? Maybe my body has totally forgotten how! Maybe I'll crash and burn!

We kept a fairly consistent pace, but since I turned off my auto-pause, our stop for fuel at mile 5 factored in here. Our moving pace was around 11:30.

Anyway, this week I ran a whopping 14 miles all told, but at least now I know I still have long runs in me.
Funny story, speaking of the half. I told Matt I was running it and he was all, "I thought you said no long distance this year?" and I said, "It's just a half. A half doesn't count as long!" and then I slapped myself because who talks like that? I guess what I meant was "no marathons this year" and "I'll focus on 5k and 10k races." I also vaguely recall telling myself "no half marathons after February ever again." Oops.

What was a highlight of your weekend?
What distance do you have to cover when training to set your mind at ease?