Last week I mentioned that I was running the Marco Island Half just for fun with Kristin. Well, "fun" is a subjective word, it turns out.

This was honestly one of the hardest races I've ever run! It was really humbling...but not necessarily in a bad way. This was my 10th half, and I was beginning to feel a little cocky about it. Boy, did Marco put me in my place!

I only signed up because Kristin really loves this race and was getting cold feet after Disney. Side note: anyone else develop a short-lived fear of distance races after their first full?

Anyway, Kristin loves this race because it's challenging and so totally different than any other Florida race. Guys, there are hills. Like, legit hills. The course takes you through a hilly neighborhood in the first mile, up a super steep bridge around mile 3, and then immediately back up the bridge again!
From miles 7-11 there are constant rolling hills through a very pretty Marco Island neighborhood. And then, at mile 12 you come back to the first neighborhood and its hills. And then, finally, you finish. Your legs feel like water and your heart rate is going crazy from all the ups-and-downs, and the finish line is the most beautiful thing you've ever seen.

This is not my kind of race, but I was more than happy to experience it with Kristin. And it was kind of cool to face the fact that being good at my usual half marathons doesn't mean I'm good at all of them. There's always room for improvement!
Anyway, race time. We got to Marco just after 6, so we had plenty of time to get our bibs and use the bathroom a million times. It was sprinkling, and we were hoping the rain would continue. We thought it started at 7, but it actually began at 7:30. By that time, the rain had stopped and the steam and humidity of the morning was coming off the street in almost tangible waves.

The late start sucked for a few reasons. For one, I was hungry again by the time we started running. For another, it meant the sun had a chance to get directly overhead before we finished.

Anyway, my calves were sore almost immediately, but I knew they'd warm up. The sun came out around mile 3, just as we were on the bridge, and that was tough. In fact, the sun and lack of wind coupled with the post-rain humidity is really what made this race so hard. The hills were hard but doable; a March date for this race is ludicrous.
There was some shade throughout the neighborhoods on the latter end of the course, and the support and water stops were great. And honestly, the views were gorgeous but hard to focus on because I was on the struggle-bus the entire race!

Around mile 10 we asked volunteers to pour ice in our bras; around mile 11, a breeze picked up and we finally got some real cloud-cover as the rain we'd been looking for finally seemed to be rolling in. (It never did rain, though.) 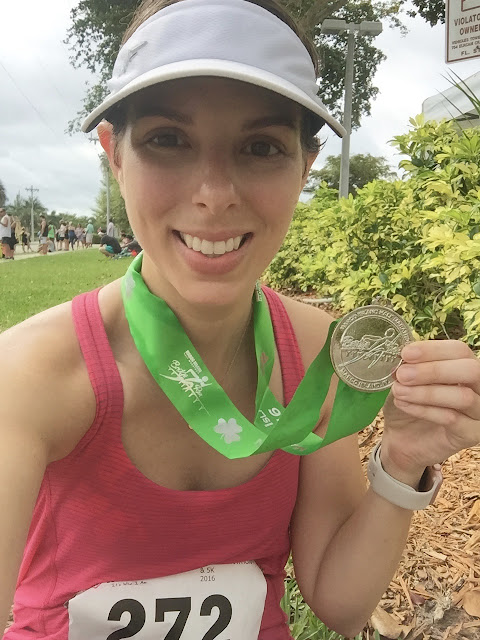 The course was really tough and I struggled, but it was nice to be there with a friend and my legs are pleasantly sore from the hills, so I'm chalking this one up as a new, challenging long run with a medal at the end!

In fact, maybe I could say this will be a favorite memory for me, if only because I've never run a race like it before and because I got to conquer it side-by-side with Kristin. 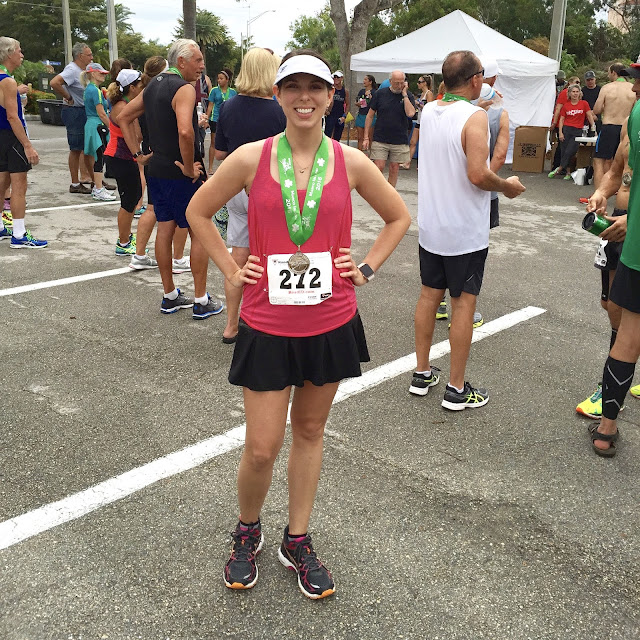 ...That doesn't mean you'll catch me doing it again, though!