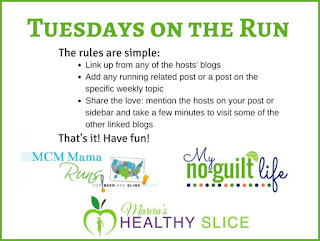 I feel like I've been pretty lucky in not facing a lot of judgment about my running. I know some runners have to deal with naysayers a lot, but my family, friends, and running groups are overwhelmingly positive.
Still, you hear the negative chatter once in awhile. More often than not, it comes from our own heads. As I've been mulling over last week's post about getting used to running short again, I was able to pinpoint why returning to shorter distances - even though I'm excited for them and am so ready for a break from marathons - has been hard to wrap my head around.

It's not true, but we've all heard it, or something like it. I thought I'd squashed this kind of negative thinking, but I guess it was just hibernating, waiting to wake when it detected the slightest hint of uncertainty.

The unsettling feeling I had last week about running shorter was me feeling like I was regressing by stopping marathons for awhile. I know logically that I'm not, but even if I were, I don't have to prove myself to anybody. I've run three marathons and I'm ready to take a break.

I have reasons for stepping back - I know I'm less scared to push my limits if the distance is lower, and once I've built some confidence I'll be able to translate that speed into longer distances - but that negative voice is there.

Overcoming that voice may be the hardest part of running.

I haven't heard my personal negative voice in awhile, and hearing it means I'm doing something new and scary, so in a way it's a good voice to hear. But now I need to push it aside, trust my gut, trust my plan, and keep moving.
And really, now that I've figured out why I felt a little weird last week, I'm feeling much better about everything! I guess that's what happens when we confront our negative feelings head-on.

What does your negative voice say?
What do you think is the hardest part of running?