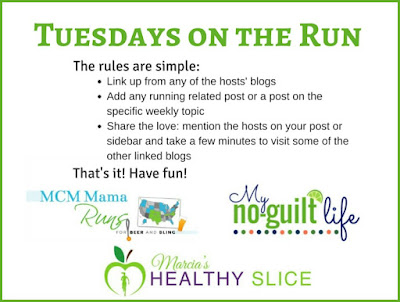 It's easy to pick out new runners at races; 90% of the time, they're the ones wearing the race's shirt.

Now honestly, I don't find this topic controversial, but I do have a pretty strong opinion on it for myself. When I signed up for my first race, I wore the race's t-shirt because the race organizers asked us to...and it was cotton, to boot.

Since then, I developed the sneaking feeling that I shouldn't wear the shirt until I'd earned it by beginning - and hopefully finishing - the race.

It's also how I felt about owning any kind of 13.1 or 26.2 paraphernalia or putting the distance stickers on my car before I'd completed those races.

There are other, more valid reasons to save the race shirt until after race day.

1. I don't do anything new on race day. It's a good rule for a reason; you have no idea if that new shirt will chafe, bleed color, or otherwise bother you until you've tested it out! Even for a short race, I prefer to wear my tried-and-true racing clothes.
2. Some shirts aren't the right style. Many winter races give out long-sleeved shirts, but it's often in the 70s or warmer on race day! And quite a few races give out cotton shirts, which I absolutely won't run in anymore. Not to mention that I prefer tank tops and very rarely run in any kind of sleeved shirt; I find them annoying.
3. I put a lot of thought into my race outfits. I spend good money on my cute running clothes and I debate multiple outfits before leaving the house on race day. I factor in temperature, humidity, the possibility of rain, whether it will be partially-cloudy...I'm not going to eschew my perfectly planned, color-coordinated racing ensemble in favor of the race shirt!
4. It's not good fashion. You don't wear the shirt of the band you're seeing to the concert, you know? The same rule-of-fashion applies to races.

Okay, that last one isn't really a valid reason, but it's how I feel!

The truth is that I rarely wear race shirts for anything other than lounging around the house or coaching volleyball. Someday I'll get them made into a quilt, but it hasn't been a priority.

I know plenty of experienced, talented runners who wear the race shirt on race day, but for me, it just never felt right!

Where do you stand on the controversy?
What do you do with all your race shirts?

PS: Skirt Sports is having their Spring Sweeps giveaway! It's really easy to enter, and they'll be giving away a $100 gift card every day until March 30.

Email ThisBlogThis!Share to TwitterShare to FacebookShare to Pinterest
Labels: clothes, controversy, link up, race shirts, totr, tuesdays on the run