Even though this was only* a 5k, this is going to be kind of a long post because it was a goal race and apparently I have a lot of feelings.

Friday night, Matt and I drove to Sarasota; Saturday's SUP & Run 5k was only fifteen minutes from my parents' house, so they let us and James crash there for the night.
Matt, James, and I had sushi for dinner, and mom had gotten us all cupcakes because she's the best host ever, so I had my fair share of carbs and protein the night before.
On the drive up, I was literally bouncing around in the car from excitement; I was just feeling totally stoked about the race. That feeling continued into the morning despite waking up a dozen times to pee (I was over-hydrating Friday because the weather for Saturday was sure to be hot). I also woke up with a bad Charlie horse despite foam rolling the night before.

Still, I felt really good Saturday morning. I rolled my calves and hamstrings and got dressed. Earlier in the week I'd decided that I wasn't going to wear a shirt to the race, which was a big deal for me and a personal milestone of a different sort. So Friday I had tried on five different sports bras to see which I felt most confident in.
We left the house around 6:45. I had my UCAN mixed with water, ice, and coffee and finished it around 7:15. I had plenty of time to pick up my packet, jog around the park (mostly just to-and-from the port-a-potties a couple times), do some dynamic stretches, and drink some water.
My mom showed up at 7:50 or so; I had asked her Friday if she wanted to spectate the race and she decided to come! She's never seen Matt race SUP before so it was a good chance for her to see him in action. Matt's dad Dave also came to watch.
The race began at 8:00 and it was hot. I lined up just behind Matt and James, knowing they'd be running miles in the 7s. My goal was to run an 8:41 pace as consistently as possible. Elizabeth texted just before I got to the starting line, and that helped me get my game face on. 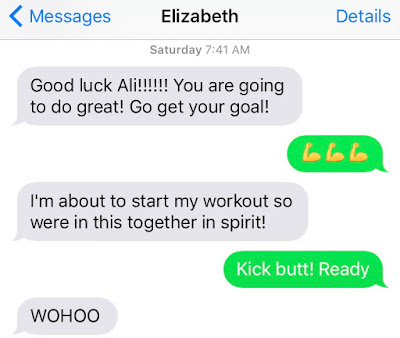 Of course, when I first started, my pace was in the 7s. Oops. I pulled back and found a challenging-but-doable pace, around 8:20. I felt strong and confident for the first half of the race and decided to stick to the faster pace and try to bank some seconds. At mile .88 I tossed water on myself. I saw Matt and James at mile 1.4 or so, and knew I was near the turn-around. I still felt good, although I had a little side-stitch.

There had been a breeze before the turn-around, but it disappeared in the latter half of the race. Around mile 2.4 I started to flag. When I passed the water stop a second time, I tossed more water on myself. I saw 9s on my watch and tried to pick it up but the numbers just kept climbing. I got into my head: If you miss your goal, fine, but you cannot finish this race with regret. You cannot regret your performance or your finish.
So I picked it up. I forced myself to rally. My lungs felt like they were going to pop out of my chest. My legs had been the same level of uncomfortable the entire race; I was judging my effort entirely on my breathing.

There was a tiny bridge near the end of the race (crossing back over to the finishing area), and I bartered with myself. I could conserve some energy on the uphill there, but then I'd sprint the last quarter mile to the end. So that's what I did. I pulled back just a touch, and then just let loose.

I turned the last corner and saw 26:40 on the clock. My eyes laser-focused into tunnel vision. F THIS! I'M GETTING A SUB-27! I told myself, and pushed pushed pushed to the end.

My A goal was 27:00; my secret A+ goal was sub-27, and I freaking EARNED IT.
My mom found me doubled-over at the finish and seemed appropriately surprised and impressed with my speedy finish; she wanted to get pictures but I'd come in too fast for her! (I wish she had gotten a picture because I'm sure my face was AWFUL in the best way possible.) When I told her I'd broken 27:00, I choked up a little.

I had passed the medals when I came in, so I went back and got mine, then got a water. A quick note here: this race benefits Operation Second Chance, an organization that seeks to offer support to wounded and ill veterans. The man handing out the medals was a vet, and I thanked him for his service.
Mom, Dave, and I hung out under his canopy for a little while because James and Matt were out on the water doing their 5k paddle, but we were at the finish when they came in. At this point, many of the wounded veterans were finishing as well. It was absolutely indescribable to watch. Many of the injured soldiers had specialty seats on their paddle-boards because they had lost their legs; Matt said he saw one female vet paddling with a single arm.

James finished the full 10k (foot race and paddle combo) in 57:12 and Matt finished in 1:01:30. Their 5k run was 22:55! I thought it was great that they stuck together for the 5k rather than trying to push each other/beat each other because running isn't their primary sport and burning out on the run may have hurt their SUP portion. It seemed like a great strategy to hang together for the foot race. 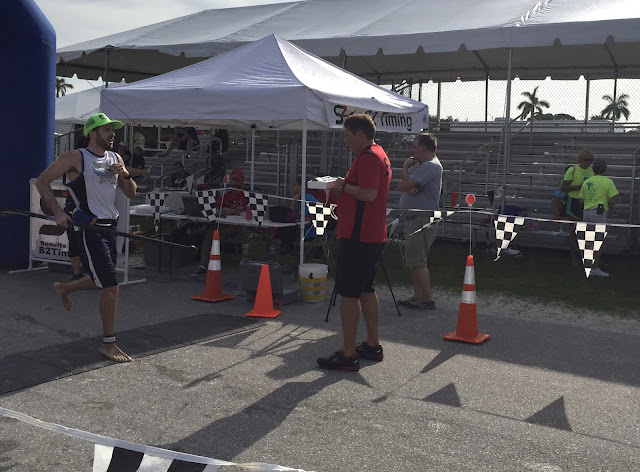 Anyway, we hung around for awards and took some pictures in the meantime. I had a pretty good feeling I had a chance to place because there were so many divisions broken down into age groups: just the run, just the paddle, and the combination. 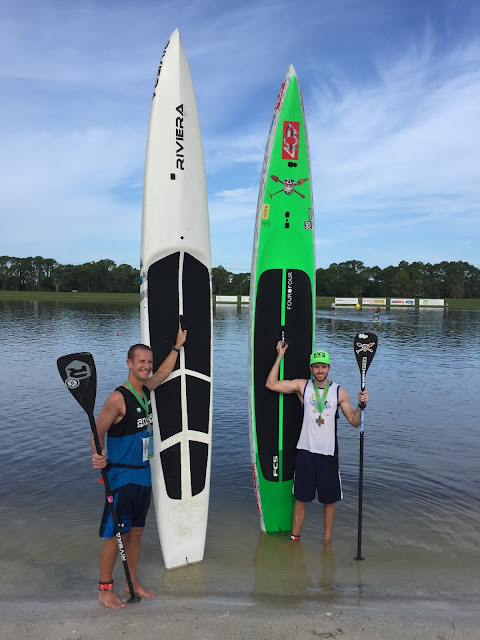 Sure enough, when they got to my division, I got to hear them announce my name for third in my age group! And there were more than just three of us! Yes! I collected my medal and basked in this sweet cherry on top of an already fantastic goal-destroying-sundae. (I came in 57 OA out of 163.) 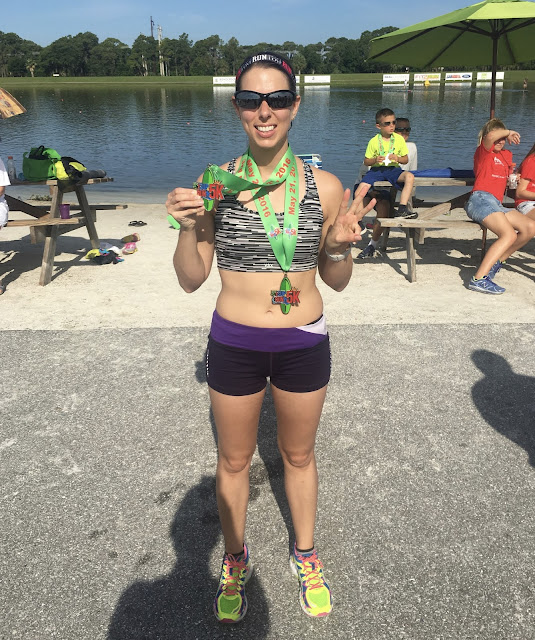 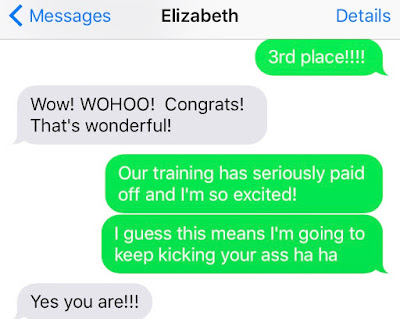 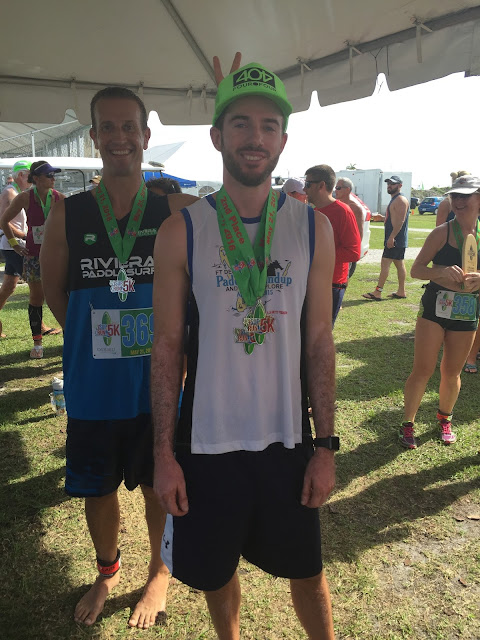 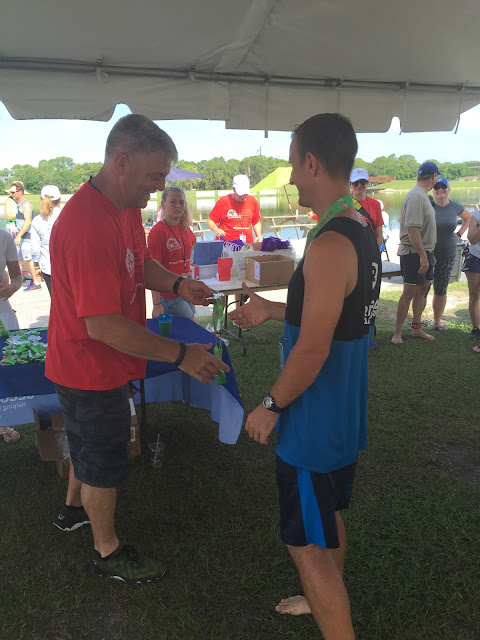 I felt weird tapering before a 5k, but I think it really paid off. Despite still having some calf issues, my legs felt fresh and ready to kick butt. Clearly my consistent running and cross-training has really paid off over the last few weeks. I'm feeling gratified and ready to continue working hard! 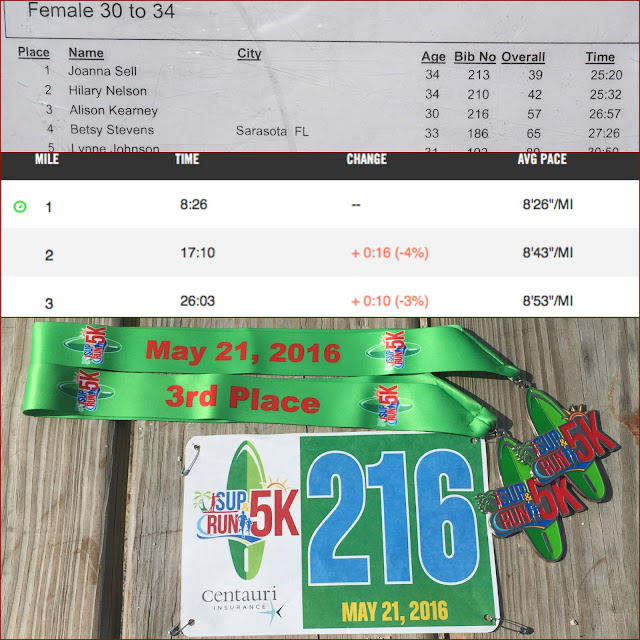 I honestly don't think that on this particular day I could have run any faster, and I think I performed the best I could despite losing control of my pace for a bit at the 3/4 mark; I was able to get myself back in control, so while my splits weren't even, they weren't too negative. This wasn't a race run under easy conditions, and I rose to the challenge!

I know I left it all out there, and I'm proud of that. I don't think I could have asked for a better day.

*Only as in "just three miles to review, and yet this post is 1000 pages long", not only in the sense that 5ks don't matter. Clearly they matter, because I put a lot of heart into this race :)
Posted by Ali K.