A couple weeks ago, my brother-in-law Scott got engaged in just about the most romantic way possible. His boyfriend Robby made him a video as he walked through places in LA important to their relationship. The footage included the phone calls Robby made to my in-laws requesting permission to propose. Then he surprised Scott by showing up unannounced in St. Croix to propose in person. The entire video is here, if you want to watch it. If you feel like crying some happy tears.
I'm sharing this because like Robby and Scott, there were couples in Pulse on Sunday who were planning to be married. Instead of sharing a wedding, they'll be sharing a funeral. One of these young men went to high school with a college friend of mine. This shooting hits very close to home.
I have always been passionate about gay rights. Maybe it's because as a Jewish woman, I've faced discrimination myself and I feel particularly empathetic to those who are marginalized. Whatever the reason, I was a proponent for gay rights before Scott had come out, before my best friend had come out, before I'd even met a gay person.

I can't understand the hatred. I can understand confusion or fear, or even that "ick" factor people might feel before being exposed to gay people and having the chance to realize they're just normal people like everyone else. But the hatred? The need to kill them? That I cannot understand.

I also can't understand the hatred for people of color that is increasing exponentially everyday. We cannot forget that Pulse was targeted on Latin night. As racist rhetoric in this country swings out of control, we can't brush over the fact that the vast majority of the victims were Latino.

I'm too angry to sit here and say "pray for change" and "love always wins". I'm so damn tired of the same old script and the fact that within a month we'll have brushed this story aside for other news. I'm enraged that people - family members even - will express sadness over this horrific tragedy but will turn around and vote for the party that has continuously blocked gun legislation that would have stopped this murderer - twice investigated but he FBI and on the no-fly list - from purchasing those same guns he used to mow down 49 innocent people while they were in the prime of their lives. They will vote for the party that supports anti-gay and anti-POC rhetoric. 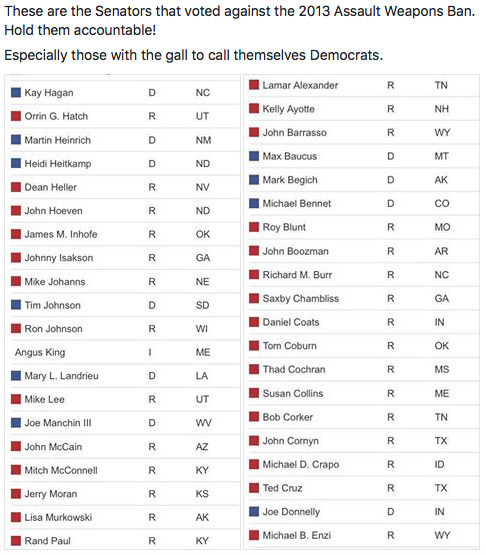 Write to your congressmen. Write to your senators. I'll be drafting a letter today and sending it to every politician who took money from the NRA and then had the gall to "pray for Orlando" via trite statements on Twitter.
Why can't America see that enough is enough? Gun control works in every other country that has passed it. Why do we insist it won't work here?
I leave you with this. Last night, Matt and I drove up to Sarasota and took his mom to the candlelight vigil in honor of the Orlando victims. One of those victims was Eddie Sotomayer, a Sarasotan himself. The vigil was a balm on aching hearts, and it was a chance for the LGBTQIA community to come together and for their straight allies to show their support.

It was beautiful and moving and poignant and invigorating. But it won't make change. We don't need more hope and prayer. We don't need memes and statistics shared on Facebook, although raising awareness helps. We need legislative change. Please get on board and actually DO SOMETHING.