This year's 4th of July celebration was extra special because it marked the official opening of Upriver Ceramics to the public! I've been calling it the "grand opening" but Matt thinks this was more of a "soft opening." Either way, we were there, we had visitors, we made contacts...it was a good day! 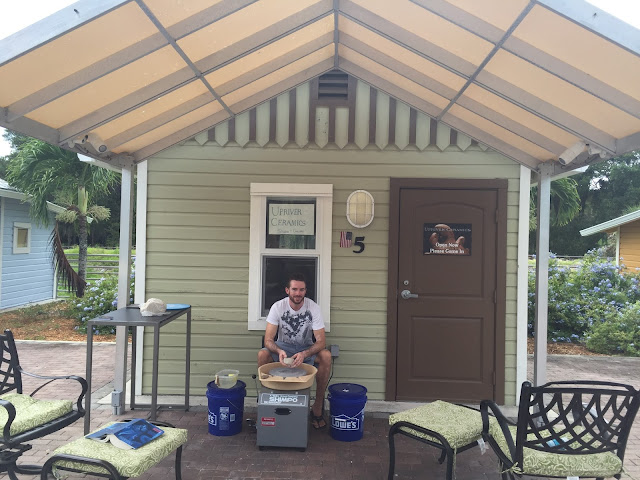 The city where Matt's studio is located hosts a festival for the Fourth every year; the renters at the cottages are expected to be at all city-hosted events, so this was the first time Matt would be opening his doors to the public. Knowing this, he's been spending a ton of time getting the studio ready.

We spent the morning putting up cards with the pieces' names and prices; we rearranged some of his work to make the space more conducive to visitors. Then, we brought his throwing wheel out under his awning and enjoyed the day.

The festivities (food trucks, ice cream, music, and games) began around 4pm. There was lightning in the area and things kept getting closed down until the "all clear" was given, which was great for us because people wandered our way while they waited for danger to pass.

Quite a few people sat down to watch Matt work on the wheel. (Little kids were especially interested and I gave a few guided tours of the studio and answered all kinds of questions the way only teachers can.)
Our friends Justin and Jessica hung out for most of the day (James and Rhonda also stopped by earlier). All told, Matt was there from 8:30 until 10, and I was there from 11:30 onward, so it was a long but gratifying day.
Although Matt didn't sell any pieces, there were a good number of people interested in commissioning pieces, and everyone took a business card. It was so gratifying to hear them as they entered the studio; everyone was surprised and impressed with the detail and obvious skill evident in Matt's work.
He's still working primarily on Kickstarter awards, but I know he's really anxious to get to work on larger projects.

What is your favorite kind of art?
What did you do for July 4th?