Monday: OMG. Elizabeth and I put together an upper-and-lower body workout and it was brutal. It looks easy enough, but we were shaking by the end. I highly recommend it! What a great way to start the week!
Tuesday: We did our first set of repeats in weeks and it went much better than expected! Our paces were a little more conservative and not as consistent, but I was actually really pleased!
Wednesday: My calves had been hurting for days, but the speed work session seemed to help stretch them out. On our full-body day, I wanted to incorporate stretching. We pretty much forgot about that, but we did a lower impact circuit that still felt effective and well-rounded, and my calves felt much better afterward. We're getting pretty good at constructing these workouts! 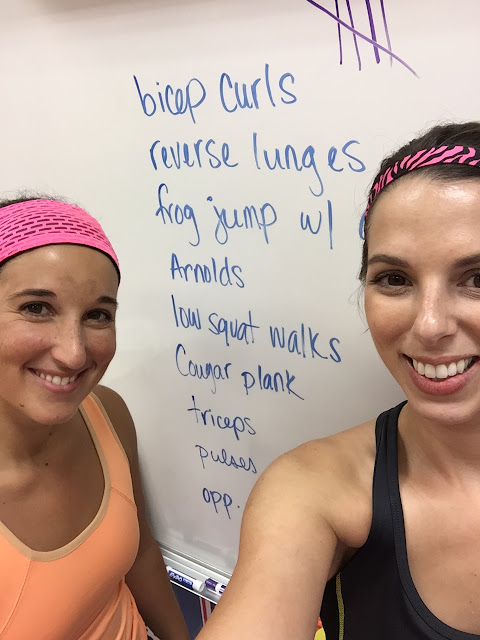 Thursday: Having realized that running faster was better for my calves, I decided to push the pace on our Thursday run. It definitely wasn't the easy run I had planned! I was surprised that we were able to hold a fast pace the entire time, and it really boosted my confidence for October's 10k! I guess I've gotten myself comfortable with slow paces and now it's time to get familiar with discomfort again. This was a good reminder that to get faster, sometimes you just have to buckle down and do it.
If I can run four miles at this pace with just one brief water break, I think my chances are good for 6.22 miles by mid-October.

Friday: We had five actually easy miles planned - I thought keeping our pace around 10:10 would be a good easy pace - but it started raining 1.5 miles in. We turned back early in case the rain really picked up, and I'm glad we did because as soon as we reached the car it began storming pretty hard and the lightning was intense. We called it early for safety.
I was disappointed to have to stop early, but because Thursday's run had been such a good workout, in the end I was okay with it.

Saturday: So. Much. Rest. I woke up early with my eyes swollen nearly shut. I took two Prednisone and went back to bed with an ice pack on my face. When I woke up again, my left eye was better but I still couldn't open my right. I ate lunch and took two Benadryl, which knocked me out. I took a three hour nap. When I got up, both eyes could open, but the swelling was still obvious.
I wish we know what caused my angioedema attacks, but the very nature of it means we simply don't know. (I am allergic to tons of environmental factors, but my doctors have ruled out any relationship between those allergies and my attacks, so I've been diagnosed with idiopathic angioedema.) Clearly overheating is a concern, but I can't stop my workouts just because I'm worried about a little facial swelling!
Once the swelling is all gone, my eyelids and undereyes will be sensitive, red, and scaly for a few days, so I have that to look forward to. (I tend to get a lot of "You look tired. Are you sick?" comment after an attack.) It makes working out painful because sweat hurts my face, but I just carry on as best I can.

Sunday: We pushed our run to the evening so I'd have some extra time to get over my swollen face. We meant to run 7 miles but I chose a route I forgot was 8, so we did 8. They weren't stellar - it was really humid and hot, but we got them done!
It was our first long run in a month or more, so I'm actually pretty happy with it despite how uncomfortable it was.