Tuesday: Elizabeth and I ran 5.3 miles over the bridge. It was really humid and warm, and I felt completely useless. I had to walk a lot and just felt really sick and lightheaded. The run took us an hour, which was much longer than I had counted on for the mileage, and my right calf was tight the entire time.
If Elizabeth hadn't been with me, I would have quit early. This was one of those days where having a workout buddy really paid off. I think my issue was partially low blood sugar (I had a Coke as soon as I finished the run and felt better.)

Wednesday: Wednesday I was still having some weird lightheadedness. I went home after work and did this video...
...followed by lots of stretching and some planks, etc. I was really just focusing on getting my calf feeling right.

Thursday: We had to run in the morning because I had another 5-8pm training. We did 3.4 miles at 5:15am and I felt really good. I took a salt tab before the run, and I think that made a big difference! I need to remember this and keep taking salt pre-run until the weather breaks.
Friday: When I got home from work, there was constant thunder but it didn't quite look like rain. I got changed and went outside to run around 6:30, but literally made it five steps before lightning streaked across the sky directly overhead. NOPE.
I really was excited to run and was feeling really good, but had to take my workout inside. I did some core and ab work, then squats, lunges, and some pushups and kettle-bell swings. Just a general full-body workout. It felt good, but I wish I had a treadmill!

Sunday: Elizabeth and I took a new route and ran 9.5 miles. The run felt awesome. It was 75 degrees with 91% humidity, but I felt great! My calves were still tight for the first 2.5 miles or so, but once they warmed up my legs felt strong. Considering I have a few little races coming up now, I need to figure out how to warm my calves up so they're not tight early in the run. 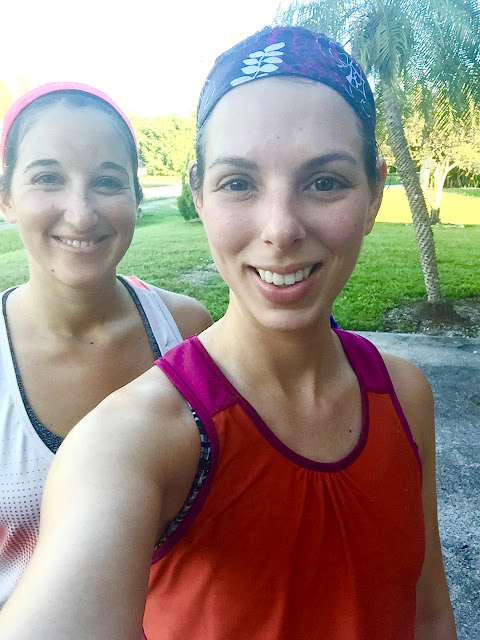 The one thing that sucked about this run is that our tracking failed at the very end. The Nike+ app has been going through some changes, and it's been awful. It glitches all the time. Today, it was working on my phone and watch without trouble, and I saw our splits about halfway through and heard the voice feedback at the end as it gave us our final pacing updates, but when I went to turn it off, it froze up and completely deleted our splits! I know early in the run we were at a 10:58 pace; at the halfway point we were at a 10:45; and by the end we were at a 10:35 overall pace, so I know we had some good negative splits. I'm pissed that the app ate my data.
I'm not the only one having this issue; the comments on the support pages and app store reviews all reflect that the new update is garbage. I've used Nike+ since 2009 and am comfortable with it; I like it better than using a Garmin. But if they don't clean up the new app, I'm going to have to stop using it.

Other than that, this long run was perfect! Again, I still need to figure out what to do about my calves early on during runs - if it takes 3 miles to warm up, then I need to bear that in mind on race days. Still, this was an improvement to how I felt Tuesday, so I'm happy! It was a great way to end the week!