We talk about fighting. About not giving up. But what does it really mean? What does it look like?

It looks like this:
The timing of this march couldn't have been better. On Thursday and Friday I had attended the 8th grade field trip to the Holocaust Museum in Naples and listened as the docent reminded students that any act of bullying or ostracizing others could lead to dehumanizing and eventually killing people who are different. The museum seeks to educate the community to be compassionate; this march was a great modern-day example of just that.

On Saturday, I woke up early to attend the Naples Sister March of the Women's March on Washington. I had spent Friday night creating my sign and painting my nails Madam President pink. At 8am, Matt and I were ready to meet James and join the Women's March.
I wanted to march: because when birth control is accessible and free, the abortion rate drops drastically; because Planned Parenthood helps catch cancer and STDs before they steal lives; because women have a right to live their lives without fear of assault; because the normalization of rape-culture hurts our society; because climate change is real and we only have this one planet to live on; because when people are healthy, they are productive citizens and our society flourishes; because Black lives matter and people of color shouldn't have to live in constant fear for their lives; because no matter where anyone falls on any spectrum - LGBTQ+, able-bodied or not, no matter their ethnicity, nationality, race, or religion - we all deserve equal rights and equal respect.

I was a little nervous; I doubted that there would be violence or counter-protests in Naples because of the demographics, but you never know! As soon as we parked and walked to the rally site, though, I knew any doubts were unnecessary. The atmosphere was completely peaceful and excited. Men, women, and children milled around taking photos of signs and talking to organizers. A woman on the bandstand played "If I had a hammer" on guitar and sang to the crowd. A few people stopped us for photos and thanked us for coming out.
Then we walked to the starting point of the march. Our organizers hadn't been able to secure a permit for us to walk in the streets, so we were going to walk on sidewalks only. Well, it turned out that something like 2500 people turned up (it may have been as many as 5000 - I've heard different numbers).
It was especially amazing to see so many men and elderly people out marching. At first I was surprised by the older people but then I heard some talking about how they wished more young people understood the gravity of it all. They've been here before and marched before and know what's up, and they think young people are too apathetic. They felt they were getting ready to pass the torch. 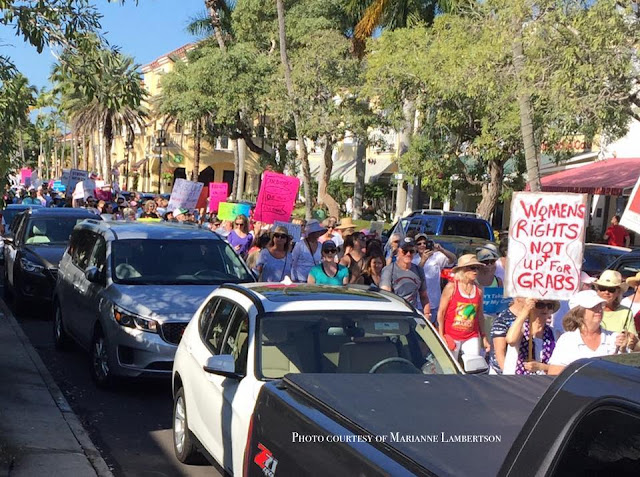 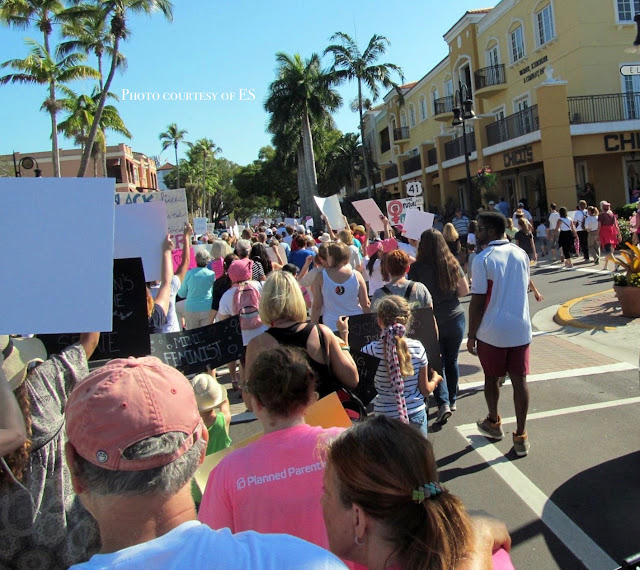 The route was only 1.1 miles, and about halfway through the police started letting us walk in the streets. They sat back and waved and took photos and directed traffic. They were so awesome!

We chanted as we walked. Most of the cars that passed us honked, waved, and gave thumbs-up. (There was only one angry dude, some guy in a truck who gave us all the finger as he drove by - very mature, truly.) After the march, we joined the rally. Our march sought to be inclusive of people who couldn't march, so they'd had activities and entertainment at the venue already.
We listened as a few speakers encouraged us to keep this energy alive, to get out and do the work that needs doing, and to know that our community and our world is on our side.

We have the moral high ground on our side.

I'm so glad I attended. Our march was small compared to those in other cities (like, holy crap, half a million people in DC?! That's AMAZING!) but I was surprised and pleased by the turnout, especially considering we're talking about southwest Florida! It really was a balm to my heart, and now I feel encouraged and hopeful.
I know there is real work to be done, hard work, and hard days ahead. But now I also know I'm not alone. I needed that.

Did you attend a march or rally?
Have you been trying to get more politically active lately?
Will you participate in the 10 Actions/100 Days initiative?