For today's Friday Five with Fairytales and Fitness, I bring you the Pros and Cons of running again...with some news at the end! 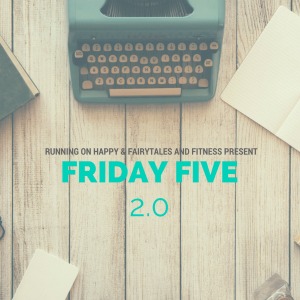 1. Pro: Having control and variety back in my workouts! Circuits get so redundant, and I hate having my choice of workout limited by injury. The freedom to choose what I want to do to get my sweat on, and the chance to change my daily workout pattern, has been wonderful.

2. Con: My pain is coming back. For the first week or two I barely had any. Then I started noticing it around 1.5 miles into my runs. This week it was really bad before I was even a mile in. But on the bright side of that, it means when I go to get my next round of tests, I know my symptoms will be present and that means the tests won't be in vain.
3. Pro: I missed being outside! Even though it's officially HOT (we're seeing high humidity and temps in the 90s already) I'm really enjoying getting some fresh air with my exercise. I missed it. That being said...

4. Con: I forgot that timing kind of sucks for running at the end of the school year. It's often too hot and sunny to run right after work, and by the time it's nice out - usually about 30 minutes before sunset, around 7:30pm - I've spent a couple hours lounging around and it's kind of hard to peel myself up off the couch.
5. Pro: My head feels so clear and awesome these days. Even though my body is struggling, I am benefiting mentally from being back to running. I just feel so much happier and more stable. I'm sleeping better. I just all-around feel more at ease.

A friend in one of my running groups posed a question about body image, and the conversation that got going led me to this realization: because running changed how I feel about my body, it also helped change how I literally see it. Running was a major tool in overcoming a variety of unhealthy habits, and I hadn't noticed how generally down I was feeling while I took time off.

I'm sure Matt and my friends have noticed!

So, the good news to end this post! I called my insurance company to check on whether a real pressure test for CECS would be covered (it will be, but it'll go toward my deductible) and I set up an appointment for May 22nd with a doctor who does the full test and whose website literally says:

What are your pros and cons of running?