*tap tap* Is this Thing On?

Well, it's been awhile. This tends to happen to me during the summer; given the time to truly isolate myself, I turn off notifications, ignore texts, and step away from my blog and social media a bit. This tendency was completely exacerbated by my frustration and sadness over my injury.

I am a naturally cynical person. I work hard to force myself to think positively, and to come across as positive on my blog. I simply didn't have the energy for that kind of thing over the last four weeks, so I took some time off. Let's call it a mental health month. I'm not sure I'm back, necessarily, but I needed to update with the latest on my calves, for my sake if for nothing else.

After returning from DC in May, I stopped running. This means I took about two weeks off before I realized I needed to have symptoms for my pressure test. I ran every day the week before the test, purposely pounding my feet and doing some bridge repetitions to feel some tightness.

By Monday, I was at a pain level of 4 or 5; I had been experiencing 8-9. I was worried this wouldn't be good enough for my pressure test, but didn't want to reschedule it. (I think this was a dumb decision; I should I pushed it back until my symptoms were fully there.)

On Tuesday morning Matt and I drove down to my doctor where the PA, Mark, would do my test. The worst part was the lidocaine injections to numb my calves. Talk about burning!

After that, Mark initially tested two compartments on each calf: the anterior and superficial posterior. He recorded the initial readings. I could feel pressure against my skin and a little "pop" when the needle went in, then another kind of pop when the needle came out. I didn't have any pain or discomfort, but there was definitely blood.
(Matt told me later that, even though he is not squeamish and was awake for his wisdom teeth removal, he could not have had this test done. The needle is a pretty wide gauge and he said he could see me skin denting and pushing in before the needle finally popped through the skin.)

After the initial readings (which sounded low to me, although one compartment was already at the 15mgm reading) I ran on the treadmill. I made the mistake of cranking up the speed and the incline, so I was tired out by the time 20 minutes rolled around and called it quits even though my legs didn't necessarily hurt...they were just tired.
I mean, maybe they hurt? It was hard to tell with the numbing agent and the incline; I felt like I didn't even know where my body should be at this point, or how much pain they would need to get a good reading. I would say I was at about a 4 after 20 minutes.

Mark inserted the pressure needle back into each compartment twice more, once after a minute of rest and again after four more minutes. He used the same entry-hole each time, so I wouldn't have a bunch. 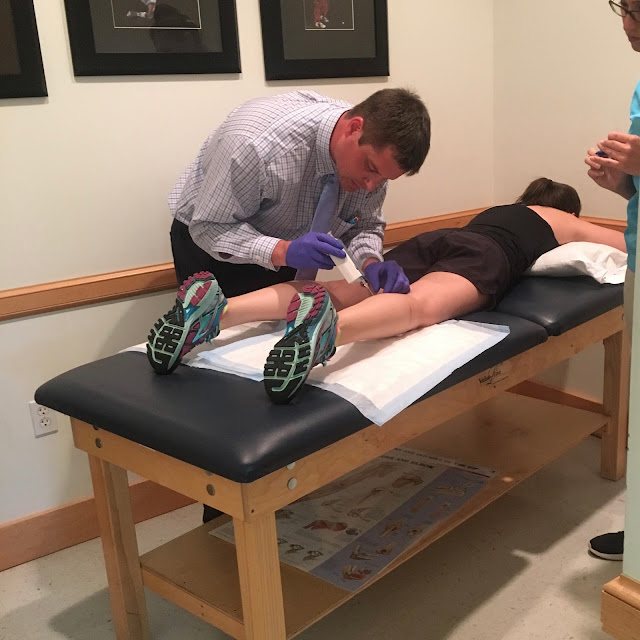 The readings weren't very high, from what I could tell. (I think the highest at this point was 17mgm, and we were looking for 20-30). I never heard "Holy crap!" or anything, and he wanted me to go back on the treadmill so he could test one more compartment on each leg.

He gave me more lidocaine so he could test the deep posterior compartment, then put me back on the treadmill for ten more minutes. By this time, my lower legs felt numb. It was really hard to tell if I was having pain and tightness or not.

He tested the last compartment on each leg. The left deep posterior read very high, but it was jumping around a lot (26-36). Mark removed the needle to recalibrate it to 0, then inserted it again. I'm not sure if the final reading was high or not. By this time I was feeling too despondent to ask; I was sure the results weren't going to be conclusive.

Mark and his assistant got me cleaned me up, and told me Dr. Guerra would review the results and get back to me when he returned from vacation. And that was it!
My legs are pretty sore now, especially in the deep posterior area, but I haven't even needed Advil or ice. I'm a good healer.

The whole thing took a few hours, including waiting-room time, and went smoothly, but I am absolutely sure the results won't be conclusive. I honestly don't know if I'll be able to do this test again due to cost...but I am hoping they will still consider treating me based on other factors.

So, that's that for now. Hopefully I'll hear back soon with the next step in the plan. In the meantime, I'm sorry for my absence, and I hope you all have been doing well. I've tried to keep up with many of you on Instagram and Facebook; my heart just can't take running blogs at the moment.