I am going to include photos in this post; nothing is gory or bloody, but there is one photo of inside my leg so if you think that might gross you out, you've been warned!

Matt and I arrived at Naples Day Surgery at 2pm for intake. I was feeling very calm; I don't think I got nervous once during the entire day, maybe because I was still in denial a little bit about actually having surgery. Let's call it survival mode!

After I changed into a gown and got settled in the pre-op area, Matt came back to wait with me. The nurse gave me an IV to start pushing some fluids because I hadn't had any since very early in the morning, and then the anesthesiologist team (there were three of them) came by to each check on me and get my medical history.
One of these team members had had an emergency fasciotomy in high school due to a football injury, and he showed me his scars. Everyone was so helpful and nice; I definitely give them all an A+ for bedside manner.

Dr. Guerra came by and marked my leg, and then I asked one of the nurses to help me to the bathroom. The IV had made me have to pee, and I was afraid I'd go on the operating table once I was under anesthesia!

Finally, it was time to go into the operating room. They pushed the first dose of...something...into my IV and I immediately started feeling loopy. I remember trying to tell them a story as they wheeled me into the OR, but I honestly don't know what I was telling them. (Okay, I think I was telling them about an Unsolved Mysteries case about a doctor who killed patients by putting bubbles in their IVs. What is wrong with me?)  I vaguely remember the nurse attaching the monitor wires to my chest, and I think I remember the oxygen mask.
The next thing I knew, I was hearing voices and being moved into a sitting position. I became aware that Matt was there talking to someone about my care, and I asked for something to drink. I felt dizzy from the anesthesia, so I asked for apple juice (I felt like I needed the sugar) and nursed that slowly while I woke up. 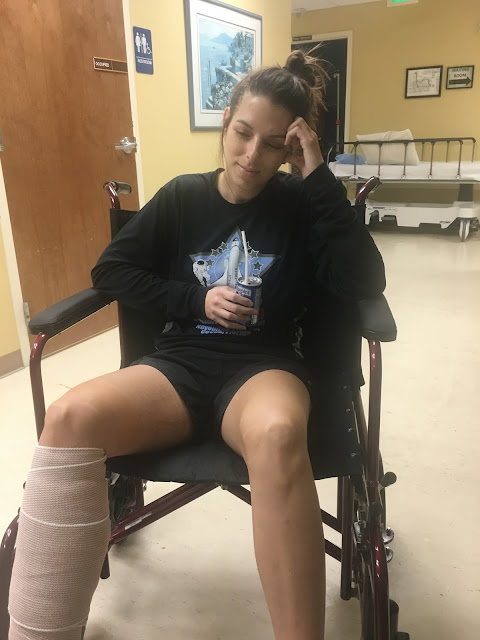 I was wheeled out to the car, and about halfway home I made Matt pull over so I could try to puke, but nothing came up. After that passed, I actually felt a lot better. Matt stopped at Publix to get me ice cream and soup (I remember telling him exactly what to get me, but it's all very foggy; all my memories from Thursday are), and then at home he made me dinner and was generally just the best caretaker I could ask for.
I used my crutches the rest of the day Thursday. I really didn't want to take any of the narcotic painkillers I had been prescribed, so I stuck with Advil (Dr. Guerra said that was fine) and actually didn't have much pain. I was able to sleep pretty well!

I spent the day lounging around watching Jessica Jones with Matt. I was able to hobble around a bit without the crutches, and was still taking 600mg of Advil every 6 hours or so, but really my pain was very manageable.
I woke up around 3am Saturday morning with some burning in one incision, and I took Advil and went back to bed.

I was finally allowed to shower Saturday night! I did not have to take any Advil all day (besides the 3am wakeup) and was fully walking without crutches. Matt helped me unwind my leg and peel off the old dressings before my shower. After examining the incisions, we dressed them back up and I finally had a chance to shower. Afterward, my leg was a little sore from standing, but mostly I felt great.
I had no swelling or bruising; my muscle was sore beneath my skin, but the surgical sites themselves were completely numb. I know this could last up to a couple months.
Sunday

By Sunday, I had no pain at all. My ankle is a little sore where my anterior incision is, but the rest of my leg is painfree, if a little stiff. We even left the house Sunday so I could walk around a feel like a normal person.

I start PT on Tuesday and I am excited to get on with it! My post-op is September 11, and I hope at that time we can schedule my left leg, because I am bouncing back fast from the right and I am ready to be totally done with both! I'm hoping my fast recovery means I could get my right leg done on a "normal" long weekend. This time I had five days off but I think four would be plenty.

I am so grateful Kristina is going through this at the same time as me; it sucks to have this injury, but it's nice to not be alone. I am so ready to come back, to truly train, and to run again the way I used to.