It's been ~36 hours since I ran the A1A 5k (that's not really what it's called but I'm going to keep calling it that) and I still can't get my thoughts together.

We arrived in Fort Lauderdale on Friday evening. Matt, Oden, and I met my sister and Gordon at the expo and did all the usual expo-y things. It felt strange. On the one hand, I felt like an imposter because the expo is really set up for the half and full marathons and we were running "just" the 5k. On the other hand, I felt happy to be at an expo again, and collecting my bib felt great. On the third hand (if I had one to borrow from someone), I felt disappointed that I wasn't gearing up to run the half. I felt both excited and underwhelmed. It was bizarre. 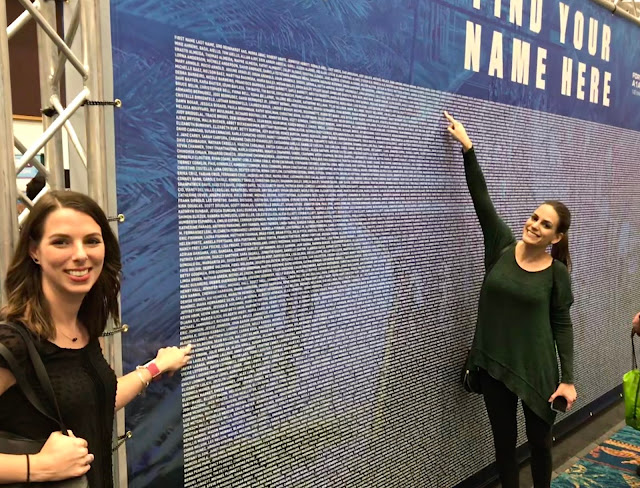 We had dinner at Outback before heading back to Oden's. The evening was so low-key. There's so little prep needed for a 5k! The race was set to begin at 7:30am so we agreed to be parked by 7am. Oden lives about 10 minutes from the staging area. I set up my Flat-Ali and went straight to bed. I slept well.
I chose to wear a black ribbon around my arm to acknowledge the Marjory Stoneman Douglas shooting and in memory of the victims. The race was about an hour from Parkland.

In the morning, I had half a cup of oatmeal for breakfast and some water; I had forgotten to buy coffee (Oden doesn't have any in the house because he doesn't drink it) but I felt awake and ready to go. I didn't feel nervous at all; I was surprised, in fact, to find I wasn't really feeling anything.

We got to the start without an issue and had plenty of time to use the porto-potties and get pre-race pictures. 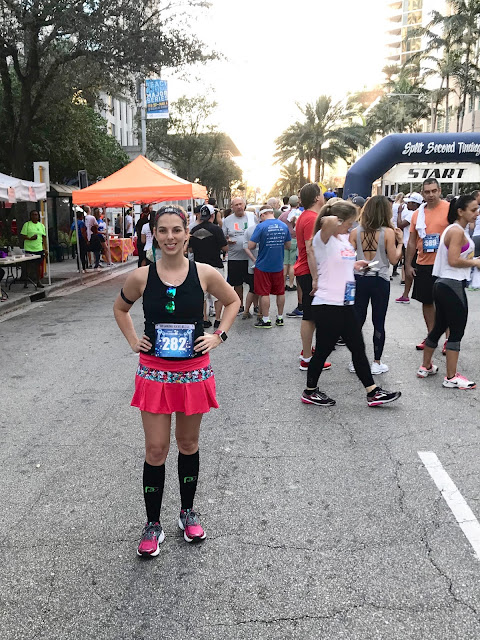 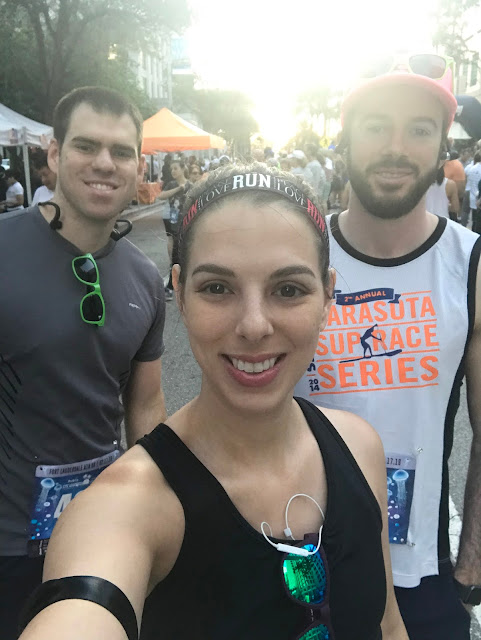 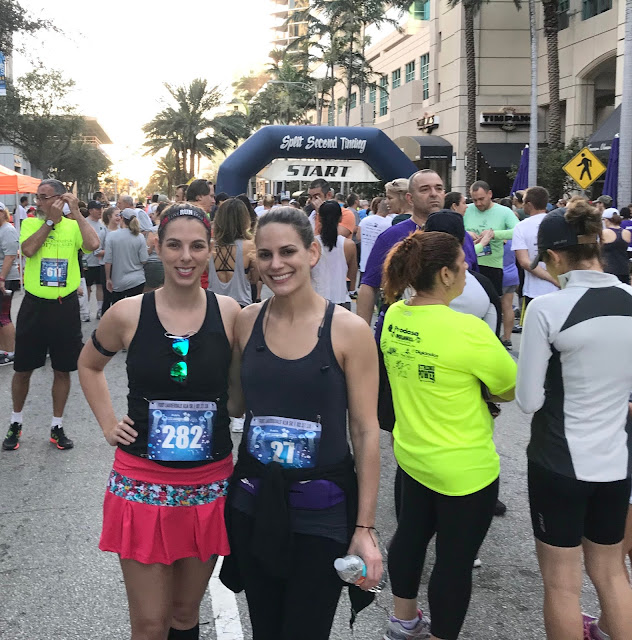 Matt gave me a good-luck kiss and then went to line up near the front of the line; he had looked at finishing times from last year's race and thought he had a chance to place. Oden, Gordon, and Steph stuck with me and we lined up toward the middle-right. I explained run-walk race etiquette to them, but figured Oden would take off on his own.

Sidenote: Oden runs two miles every morning but has never run a race. I was excited that he agreed to run with us this year!

The race was much smaller than I expected. Most runners in Ft. Lauderdale this weekend were running the bigger races on Sunday, so this race was made up of lots of walkers and first-timers, who I could pick out by the fact that they were running in the race shirt. The first mile was rough. We had to weave around a lot of people and it was very congested. I worried about losing Steph and Gordon and also didn't want to mess up my intervals so early on.

We hit the first mile in 11:45 and I told them it was too slow. My paces have averaged 10:45 or so using 2:1 intervals. My calves were a little stiff, but in the "I am just getting warmed up" sense. The next run interval, Steph took off! I played catch up and we ended up clocking in the mid-9s. This is how we spent the rest of the race, running in low/mid-9s for our 2-minute runs.

Around mile 1.6, I took stock. My legs were sore from the effort but they were sore in my hamstrings! "My calves feel GREAT!" I laughed. This was when I finally got kind of emotional; we were really working hard during the run intervals and it felt like homecoming.

Oden had already left us and Gordon had fallen behind a little bit, so it was just us sisters from that point on. We took our final walk break and I told Steph we'd run the rest of the way to the finish. And boy, did we! We sprinted into the 7s. 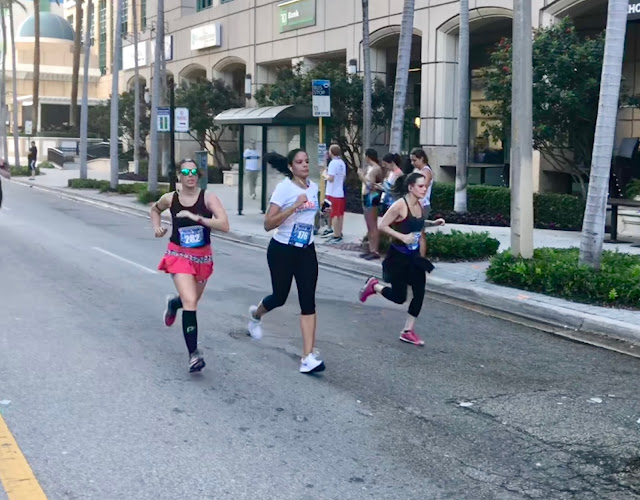 Steph urged me to pass a girl in front of us and I was like, "Uh, yeah right," but then we cranked it up and did. And then we passed a second girl and came into the finish line together. 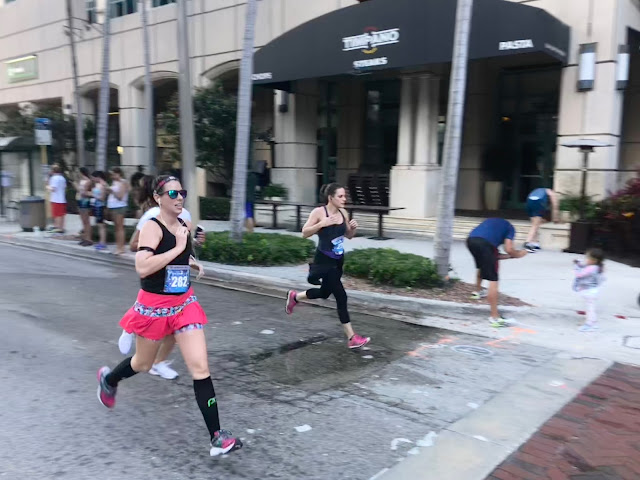 Matt and Oden had already finished and met us at the end. I felt amazing. I actually felt I could've easily run more. My calves were completely pain-free. 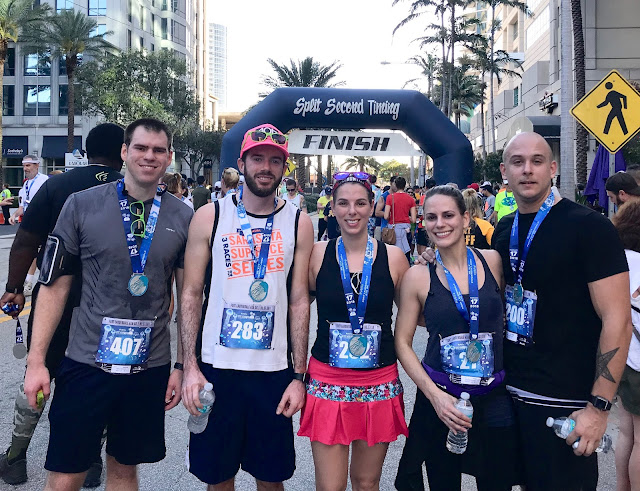 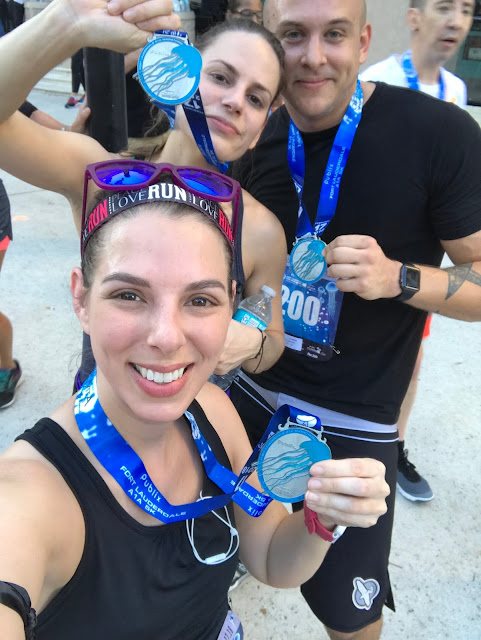 We took our photos and checked stats. Matt came in 4th in his AG with Oden just behind; I think Oden was really impressed and pleased with how much faster he could run in a race setting and I think he'll do some more 5ks in the future. 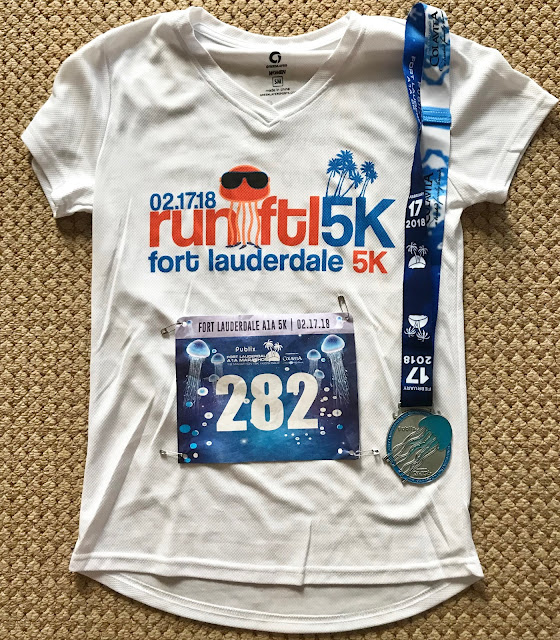 The rest of my birthday weekend was amazing. We celebrated the 5k with a bigger brunch than we needed, but we felt we deserved it anyway. Saturday evening we all did an escape room together, which I had never done before and it was so fun! We solved it in 39 minutes and it was a surprisingly fun adrenaline rush to solve puzzles and work together to "escape". Afterward, Oden and Matt and I went to an arcade bar where you can play old video games while you hang out; I played some classic Mario along with Sonic and Smash Bros.
I am having some thoughts about this race.

One thing that I am trying to come to terms with is that the woman who won 1st in my AG would have been easily beatable if I were in my usual 5k shape. I have to let that go. It's hard and weird to be both so pleased that I even ran a race again and hit some of those crazy paces, and also to play "what if" and "what could have been". I have to remember this is my journey and try to avoid the comparison trap...And that means not comparing myself to myself-from-2016, too.

I'm left wondering what to do next to help myself progress. This race showed me that I'm ready to pick up some harder workouts, but I also shortened my run intervals because 3:1 was too challenging just last week. So maybe I need to shorten my walk intervals and increase my total distance and go from there. 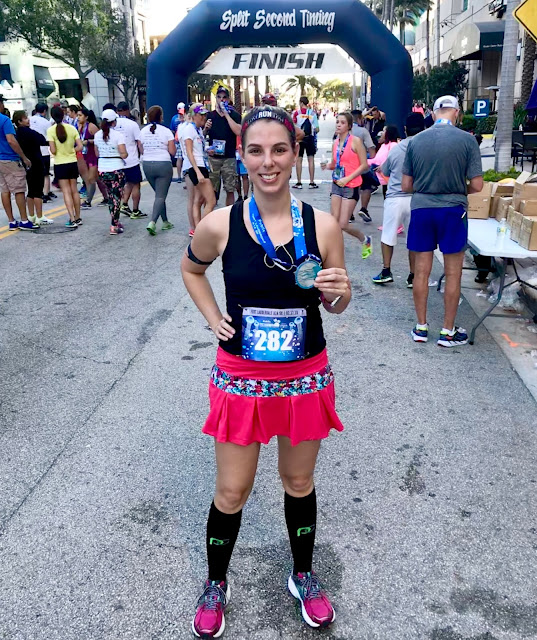 Some of my fear of pushing too hard too soon has been cured by this race. My legs felt great during and after the race; I now know I can push my effort a little more. It's been three months since my second surgery, which is how long Dr. G told me it would take to feel "normal" again. So I think this means I'm ready to do more.

Overall, this was a great weekend and a good race to come back with. I was tempted to abandon my intervals but played it smart and safe, and now I'm champing at the bit to do more and be fully back. I'm looking forward to what's to come.