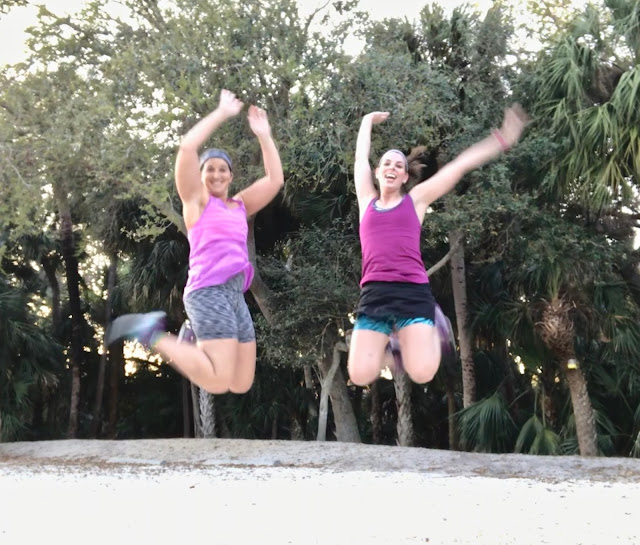 Back in 2012, I wrote about the first time I successfully ran four miles. I had to go back and find that post because tonight was the first time I've done so since...Well, since the A1A half marathon last February. (I'm not exaggerating. I just went back to check. It's really been over a year.) This has always been a special distance to me. It became my everyday easy-run distance, but before I got there, it was my Everest.

It was the first time I knew I could make real progress. This time around, four miles feels much the same. I am seeing progress. As I wrote then: "...I realized I really could go farther, and that there was no limit because my body is an amazing machine that will adapt, progress, adjust, and grow strong."

So, in honor of this new beginning, I bring you a post from six years and many lessons ago. My heart ached reading it. When I wrote it, I never thought I'd recapture this pure, simple joy, or the feeling of awe that went with it. I never experienced it even in marathon training.

But tonight, I felt it. And re-reading the post, I almost felt I would cry.

In the summer of 2011, after taking a long break from running, I hit a personal milestone. I began running 4-milers.


Four miles doesn’t seem like much. After all, I’d run a Half that January. What’s four miles? But there was something special in those runs. For whatever reason, K and I weren’t running together a lot that summer, although we were still updating each other frequently on our logged miles. I think it had something to do with my ITB injury post-Half. But I finally rejoined the running world, and was running about three miles every-other-day, and she upped her distance to four.

I wondered if I could do that. At the time, I was running a path that had gotten stale. I had a horrendous mental hang-up associated with this route, and no matter how many times I ran it, I couldn’t get well over two miles before I needed a break. The path was a straight out-and-back, from my driveway, up the street, out to the main road, turn around at the corner intersection and come back. The particular corner is a bit of a sharp turn, and there’s enough brush there to block your view of the main road if you don’t continue all the way to the curb or turn the corner completely.

One day, spurred on by K’s increased mileage, I turned the corner. Where we live, the sidewalk corners at big intersections are covered in yellow plastic, signifying a crosswalk and stoplight. Usually, I’d get a foot on that yellow mat, pivot, and turn around to go home. But there I was, faced with the corner, the stoplight, a turn, and I went forward.

Down the road I continued, and as I ran, I felt a weight lift from my mind. Here was a new, unbeaten path. Here was freedom. Here was unchartered territory, a wide sidewalk that stretched for miles, all there for me to claim should I feel ready to claim it.

I hadn’t yet discovered mapping a run, driving to the starting point, and going from there, so I’d grown bored with my start-at-home-run-straight-out-run-straight-back existence. I didn’t really know I was bored, of course. All I knew was that the run seemed sluggish, boring, and weirdly difficult for such an easy distance/pace. But when I turned the corner and saw beyond the hedges all that wide open sidewalk, I knew I’d discovered something. The brain-shackles fell off and the lightbulb went on.

The first time I ran four miles, I had to walk. But soon I was running four miles under forty minutes, running even the last two-tenths that put me over my goal distance because I knew I could do it. Running 4.1 and 4.25 and onward.

Four miles doesn’t seem like a far run, but this was the first distance I had ever really run on my own, for fun. (Before I ran the Half, the farthest I had ever run was a 5k. That’s including “training”. Remember how I said I didn’t train for that?)  It was the first time I realized I really could go farther, and that there was no limit because my body is an amazing machine that will adapt, progress, adjust, and grow strong.

This fall, as K and I hit four miles for our training for the Half in November, the running is for a different purpose. We are actually sticking to a training plan. Our route takes us down the street where I originally added the distance, and I sometimes I can hardly believe that it used to be so difficult to take that one extra step onto a new road.

Looking forward to this weekend and our first official long run of training, I feel a little daunted. The first step to an increased distance is always humbling. But I know, thinking about the pride and awe I felt when I ran a 4-miler for the first time, that the struggle will be worth it, and in the end I’ll have faced and conquered yet another obstacle, another fear, and will have come out victorious.