Riverfest on the Halifax 5k

Leading up to Saturday, I was anxious. My legs had given me trouble Monday and hadn’t started to really feel better until Thursday. The route for the Riverfest 5k was daunting, with the Dunlawton Bridge making up the entirety of mile 2. I was expecting typical May weather – hot and humid. Basically, I did not have high hopes for this race. 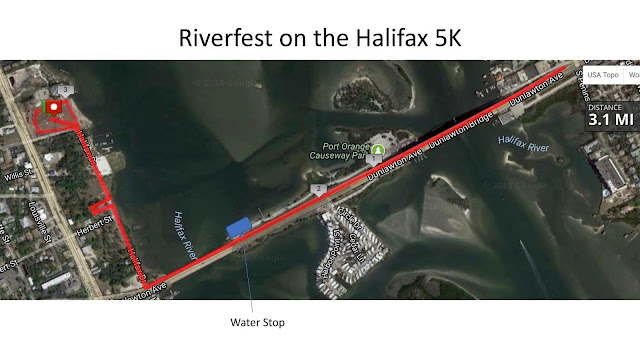 We arrived in Port Orange on Friday night around 8pm. We were staying with Mark and Shane, who were kind enough to host us even though Shane is due to give birth literally any day now. We ordered in Thai and sushi and spent some time catching up before Matt and I headed to bed around 10:30pm.

We were up at 6am and out the door at 6:30. The race venue was a new park – so new that the sod was still lumpy and potholed, which made the start and finish of the race challenging. We found parking without any issues and picked up our bibs. The weather was cool, breezy, and overcast. The humidity wasn’t inconsequential, but with temperatures in the low 70s, it was manageable with the breeze. When I caught sight of the bridge for the first time, my nerves increased.
In fact, I went through a range of emotions in that half hour before the race. It was clear this inaugural race was going to be tiny and most of the participants were walkers, so I thought maybe I’d have a chance to place even if I walked a lot of it. Then I saw the bridge and had my doubts. Then I saw some of the runners who had been out on warmup runs come to the starting line and had more doubts.

My legs felt good, but not totally fresh. I did some lunges and stretched out on the railing along the Halifax River. When it was time to lineup, I started near the front, because why not?
The start was rocky. I struggled to keep my footing and not twist an ankle on the grass; once we got to the pavement, I sped up too much to compensate for the rough start and was running in the 7:40s. I had a moment of panic: I wasn’t sure what the heck was going on with my pace or what I could hold, and I didn’t want to burn out before I even made it to the bridge.

I managed to adjust my pace and completed the first mile in 8:48. My watch dinged just as I began the first ascent on the bridge. I was able to keep a pretty steady pace (sub-10). It was hard; my legs and lungs were burning, but in the typical “I’m running up a steep bridge” kind of way. I kept an eye on all the women already making the return trip, calculating my place in my head. (I realized later that I’m really bad at estimating ages – the women I thought were competition in my age group were out of my age group by a decade.) I let myself recover and kind of lope down the descent. At the bottom, we made a U-turn and immediately began the climb back up the bridge.
This part was harder. I managed not to walk, but it was a close thing. My pace dipped into the 10:50s, and when I hit the top and began the descent, my legs were jelly for longer than I’d have liked. But then the second mile dinged and I realized if I could finish the last 1.1 in less than 10 minutes, I could come in well under 30 minutes. So I shifted gears into a slightly faster pace and settled in.
It’s an odd feeling when your body engages and finds a good niche when it’s tired. It’s my favorite thing about racing.
The last quarter mile of the race took us around the perimeter of the park, so I had a view of the clock as I entered that last lap. It was in the 26s. I would have let up in the final quarter mile if I hadn’t seen that; I knew I was on track. I gave it everything I had, which wasn’t much at this point. I felt depleted.

I felt like a newborn colt as I crossed the grass to the finish line – all wobbly legs and awkward limbs. That sod was the worst. But I finished in 28:25, 14 seconds faster than the Fast & the Furriest. 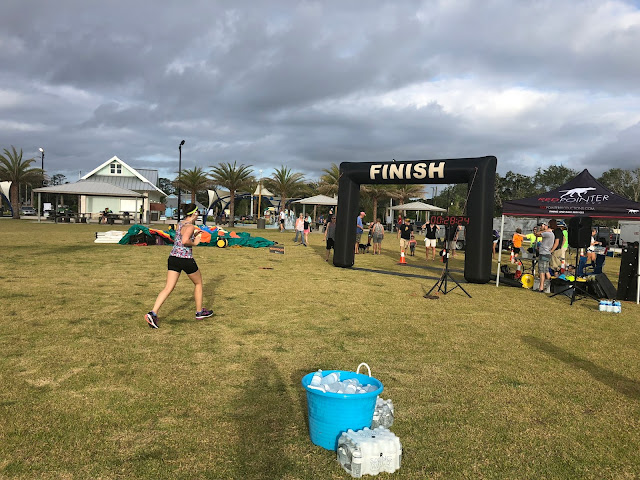 I collapsed (gracefully) behind a trailer. My brain wasn’t working yet. Matt eventually found me and told me they were posting results. He went to read them, and when he came back he told me I’d placed 2ndin my age group.

To which I responded, “Are you joking?” He assured me he wasn’t. I said, “I might cry.” And when I looked at the photo he’d taken of the results page, I really did tear up.
The pent-up fear and doubt that had plagued me all week washed away in an overwhelming wave of emotion.

This week and this race were important reminders to me that I am still in recovery; no matter how good I feel most of the time, I need to remember that recovery isn’t linear. There will be hard runs and pain here and there. As I increase my weekly mileage, I need to give my body time to adjust.
As I sat basking in my accomplishment, the man I had been running near the entire race approached me. He’d been in front of me for most of the race, although we bounced back and forth a bit on the bridge, and I finally overtook him in the last mile. He congratulated me on a great race and a consistent pace. I thanked him for pacing me. He said he was recovering from hip surgery and training for a marathon in Savannah, so he needed to practice on hills. I told him about my legs. It was a nice moment of solidarity that left me feeling warm and thankful for the running community.
Matt had a 6 mile paddle race after my 5k. He’s been paddling in an OC1 lately and he placed 2ndin his division, too. After a long morning, we returned to Mark and Shane’s, where I took a nap before we all went out to get some celebratory ice cream. 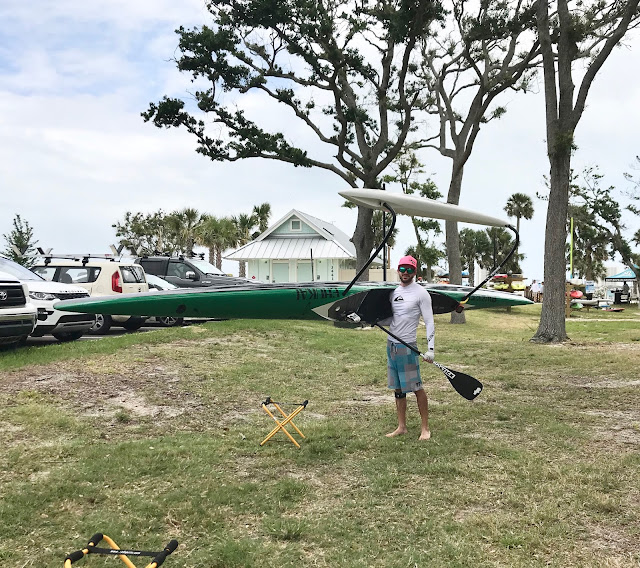 I am still shocked that I was able to manage a sub-30 finish because my mindset was so messed up going in, and because of the bridge. As my mom pointed out, I was able to meet my original B goal of beating 28:39…even though I completely scrapped my original goals and my back up goals. 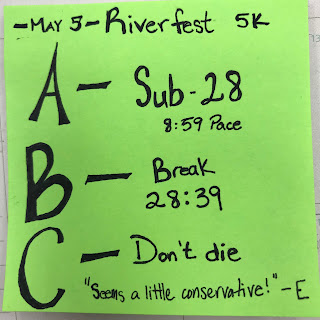 This is another reminder that my mind needs to shut up sometimes and I need to trust my body. It can do hard things, and it is stronger than I think it is.