When I say I went into this race undertrained, I'm not exaggerating. Since A1A, I've only run roughly one to two times a week. At first this was due to recovery. Then it was because of track season. Those few runs building up to this race were generally under 3 miles and fairly slow, although I did a few 3-milers closer to race day and sprinkled a little bit of speed work in.
Basically, I mean it when I say I was thinking this race was going to be a disaster. That I'd struggle the entire time. I didn't anticipate having a good race, but I thought maybe I could have a good run. 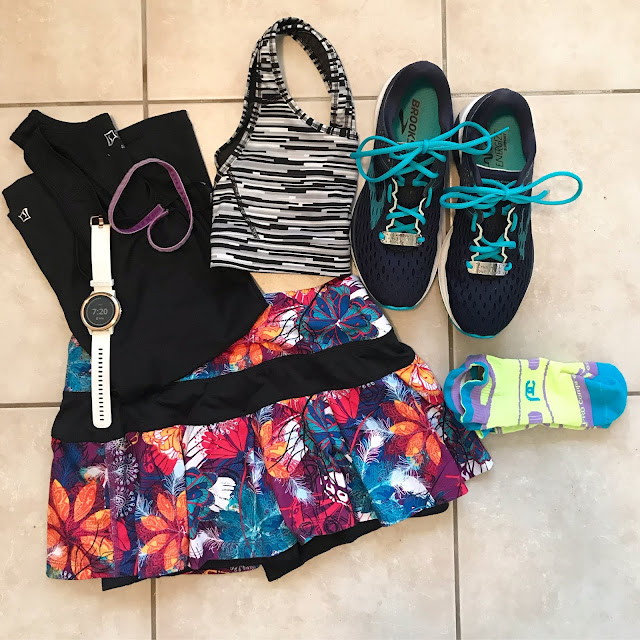 I met Michelle and Shelagh at Hammond Stadium (the Twins spring training stadium) around 7am. The race was scheduled for 7:30, which left us plenty of time to get our packets, use the bathroom, and take a few pictures. 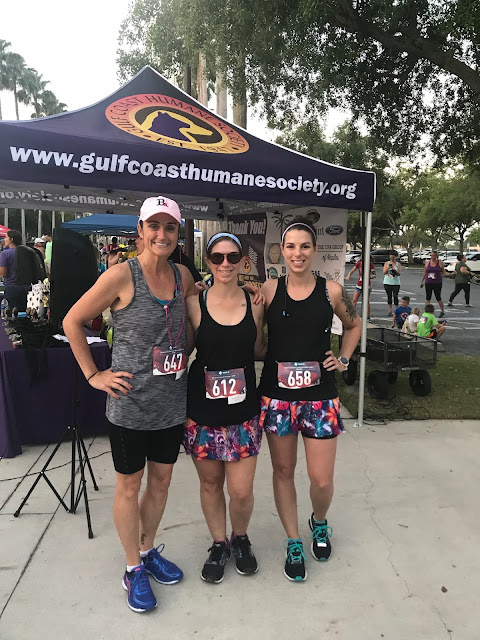 My plan for the race was just to keep it low-key. I wanted to run at a slow-and-steady pace, assuming I'd be able to complete the race without walking if I stuck to a 10-minute mile. My paces have been slower than that lately, so I wasn't sure I'd be able to. My usual goal of running sub-30 minutes felt like a stretch, and while of course I wanted to reach that goal, I honestly didn't think I had it in me. I also was kind of resolved not to really try.

For the first time in years, sub-30 felt like a pipe dream, and I didn't want to risk injury by pushing myself past what I was capable of with so little training.

Anyway, we lined up at the start. Shelagh had a very specific time goal based on her race last year. She also wanted to win her age group. Michelle and I started behind her, since we weren't aiming for a competitive race. 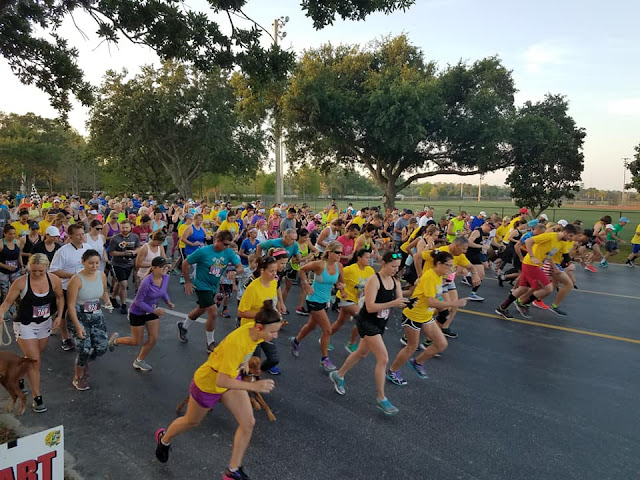 In the first half mile or so, I was running too fast and having trouble modulating my pace. When I tried too hard to slow down, my shins hurt. But eventually I settled into a pace that felt pretty good, around the 9:40s, and my first mile ended up averaging 9:15.

With some major cushion on the time now, I settled in and just tried to run steady. I didn't have to play any mind games with myself because I was so entirely goal-less, and in a way this was one of the easiest 5ks I've ever run. (Don't get me wrong - it was hot and I was working hard, but it felt mentally easy.)

Around mile 1.5, I started giving myself little pep talks. Halfway there. C'mon girl, nice and steady. This isn't so bad. It's only three miles. At some points I slowed down, and at others I really picked up the speed; I was ignoring my watch so I really just let my legs do whatever they wanted.
In 5ks, I tend to hit the wall around mile 2.6, and this time was no different. I recognized the spot where I'd walked last year as I came up on it this year. But knowing I'd generally kept a slower pace, I convinced myself to just slow down my run and not walk at all. Again, the lack of pressure of a goal-free race really worked in my favor mentally.

The clock at the finish line was all zeroes when I crossed, so I wasn't sure of my exact time until I saw the printed results. My time was literally the same as last year's!
Honestly, I was surprised to see the time. I wasn't keeping a close eye on my watch; I knew from the first mile that I'd likely run better than I expected to and that I might even squeak in under 30 minutes, but I absolutely did not expect to run anything like I did last year.
(Shelagh pointed out later that last year this was my first real race back and I had trained for it. Who knows how I'd have run it if I'd put in some training?!) 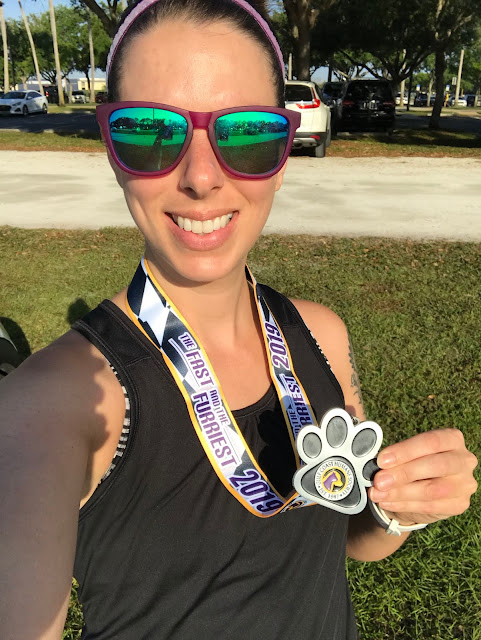 I found Shelagh, who had absolutely destroyed her time goal (and did it without a watch!), then waited for Michelle to finish. 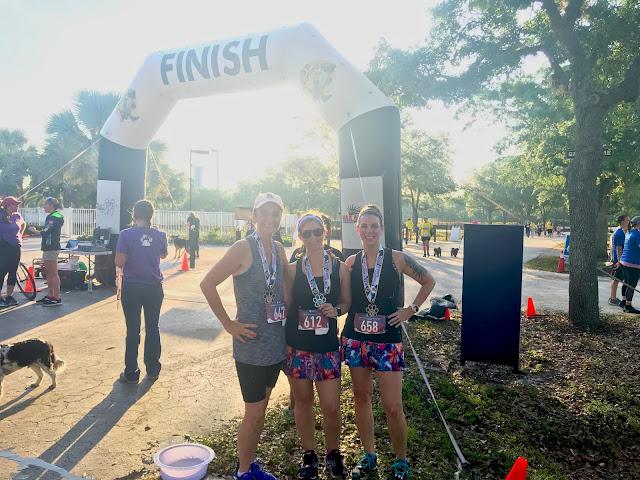 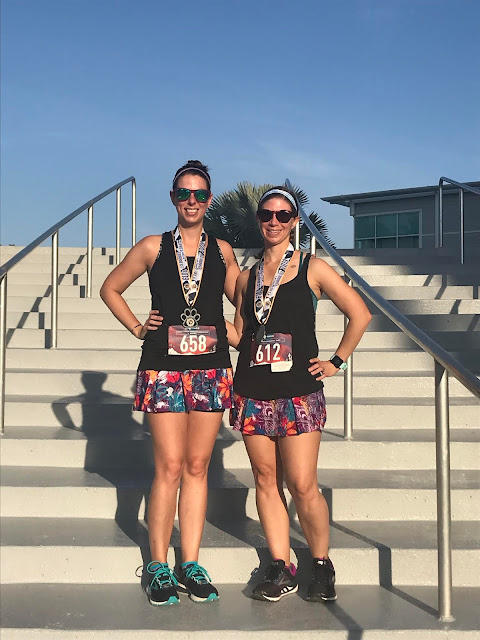 After Michelle crossed, we hung out a bit until, finally, we saw them printing results and went to look. Shelagh had placed first in her AG (6th woman overall!), so we knew we had to stay for awards.
Afterward, we went our separate ways. I felt really good. I posted a couple weeks ago on Instagram that a perk of being a "veteran" runner is that you can slack off quite a bit and still pick up where you left off fairly easily. I think this race was a good example of that; in the past, I never could have gone into a 5k so poorly trained. Now, though, my basic level of fitness seems to rest a little higher, which is nice. 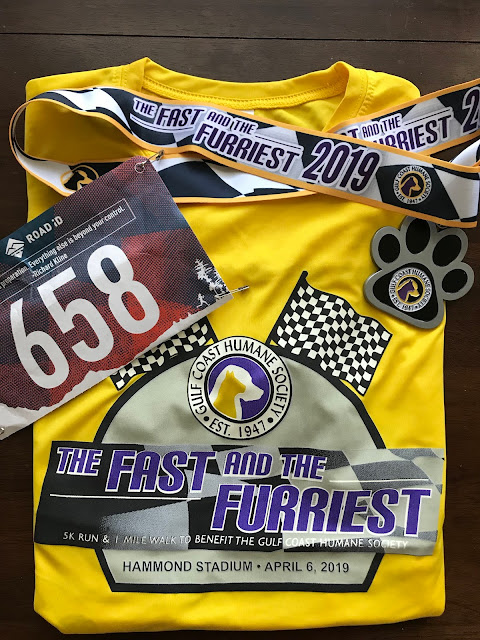 That said, it's really time for the slacking to stop. I have one more week of track (including the championships) and then I can devote more time to my own running again. I can't wait. It's time!