This race was not the race I wanted, but it was kind of the race I expected.

While I wouldn't say I didn't train for this race, I will say that I wasn't nearly as invested as I have been in the past. Hot weather came on suddenly this month, and for some reason I just couldn't get myself to run more than twice a week leading up to race day. I did a few track workouts but my regular easy runs felt tough all month. I've been happy with my running, but my heart wasn't in the race.
Still, we like to do this race yearly. Matt likes changing it up with the SUP and run, and it gives us an excuse to go visit our parents over the long weekend.

I knew from the start this was going to be a not-good (I don't want to say bad) race. This year, the race doubled in size, but the route (which is narrow and bottlenecked) didn't change. The race organizers actually set up starting zones based on paces, but most of the runners clearly had no idea what the giant numbered signs were for, because although I lined up between the 8 and 9, I was stuck behind people barely keeping an 11-minute pace.
The worst of the narrow path opens up a bit about a mile in. I wasted a lot of energy getting around slower runners and some groups running three-across with their friends. By the time I hit the half-mile mark, I knew all the stop-and-go was going to cost me in energy and time.

Besides that, the route was (as always) completely shadeless and in full sun. This race starts at 8am, which is too damn late for a Florida 5k in the summer, but last year we got lucky with a cloudy sky. This year, not so much. In fact, after finishing, I checked the temperatures and saw it was nearing 100F. (It hit 100 while awards were being announced.) I am simply not built to run in that kind of heat and full sun exposure. My heart rate was way too high and I just couldn't catch my breath.
So, I walked at mile 2. I felt myself totally give up. I knew a decent time was out of the question so it felt like...why even bother? The truth is, I'm more disappointed in how I handled my attitude during the race than anything else. But like I said, my heart wasn't in it, I didn't feel invested, and it's really hard to finish a race you don't even want to be doing when the weather's against you, too.
I had to take a second walk break kind of near the end (around 2.8). As we came around the penultimate turn - a fairly sharp right - some guy elbowed me and completely threw me off my final dig. I'm sure it was an accident, but I was already in such a pissy mood and thoroughly not enjoying myself...I basically snarled at him. At that point, I didn't even want to try for a final sprint. I just wanted it to be over.

Here's an incredibly blurry screenshot from the finishing video: 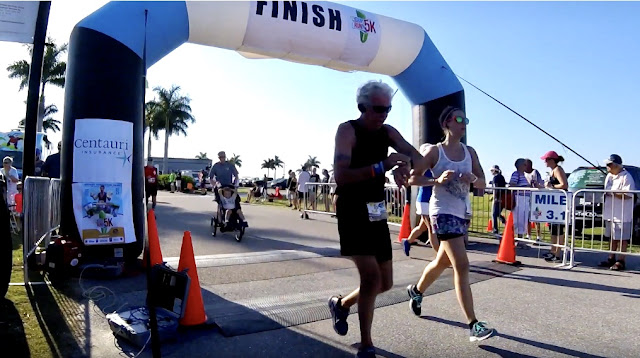 I was surprised to see Matt's dad and stepmom at the finish line. They both commented they thought they had missed me because it took me longer than expected. I had to go grab the Cannon to get some pictures of Matt's paddle, so I didn't have time to hang out with them, or to process my finish at all.
Matt did really well. He placed first in his age group for the combo category, finishing 8th overall. I caught some good pictures of him from the bridge. 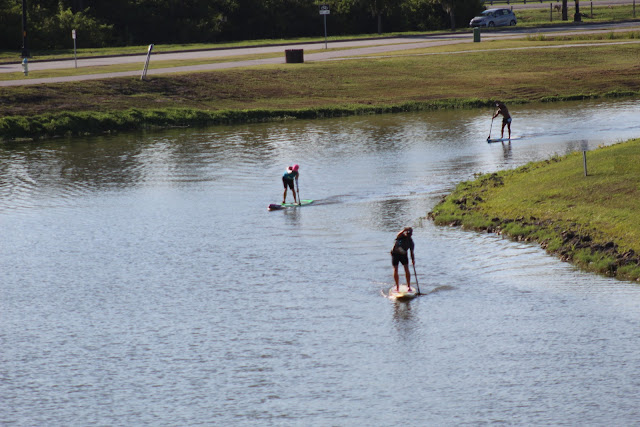 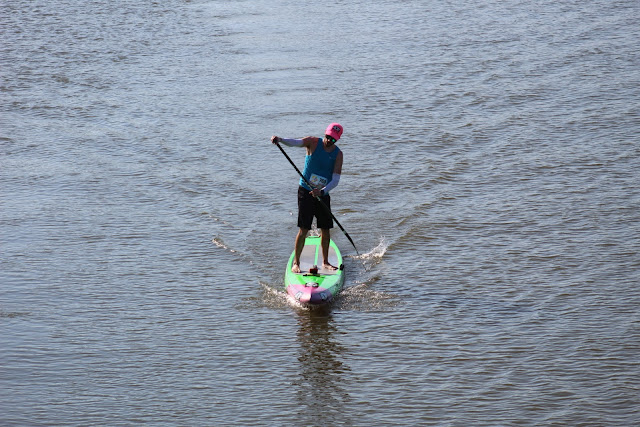 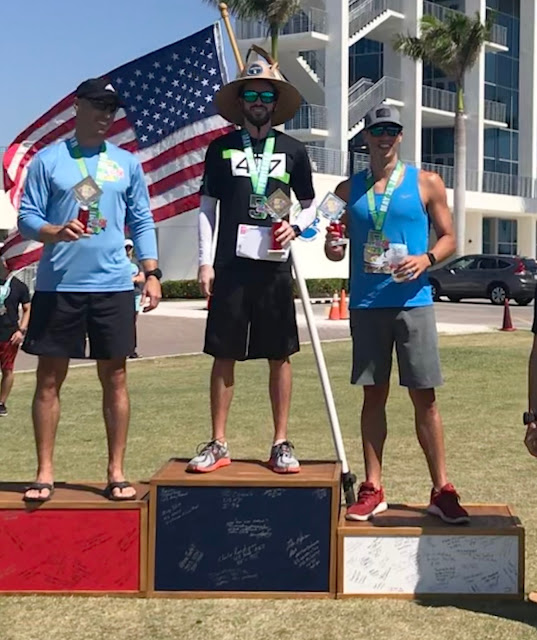 When I finally was able to find my official results, I was unsurprised to see that I'd run one of my slowest 5k in years. I finished 12th in my age group out of 29.

I know we all have days like this, and I know one mediocre 5k doesn't define me as a runner or really mean anything for my future races. It was an off day mentally and physically, and I have to take it in stride. 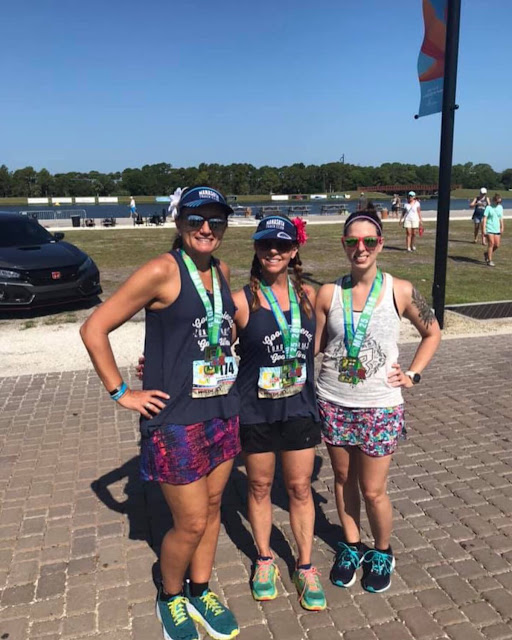 Still, it kind of stinks that a race I usually really enjoy is now going to be tainted with this memory. It is what it is...but I'm still coming to terms with what it is. This will be a good lesson someday, and it's important to me that I document the bad along with the good; right now, I am really trying to reflect on what went wrong and what I can do better next time.