This summer, we don't have a big trip planned. Unlike last year, when Scott and Robby's wedding took us to the PNW, we didn't have a big excuse to travel but we did have some reasons to stay local.

The biggest reason is my sister's wedding this summer, but that'll be a post for a different time.

Our first "local" adventure for the summer was five hours away. Sometime in the spring, a friend alerted me that one of my all-time favorite bands, The National, would be touring in St. Augustine. This is about a five hour trip for us, but Matt and I literally never go to concerts (I think the last one I went to was in 2006?) and we have friends up that way, so it felt like it had to happen.

I eventually was able to twist Matt's arm and we booked the tickets and sprang for a nice hotel. The concert was on a Monday. We drove up to Sarasota Friday to see our dads for Father's Day, then left early Saturday morning to St. Augustine.

The first part of the weekend we dedicated to seeing Mark and Shane. Mark's entire family was at their beach house for Father's Day/Mark's birthday, so it was a boisterous, fun time. We're talking loads of little kiddos and the best Italian/Argentinian hospitality. 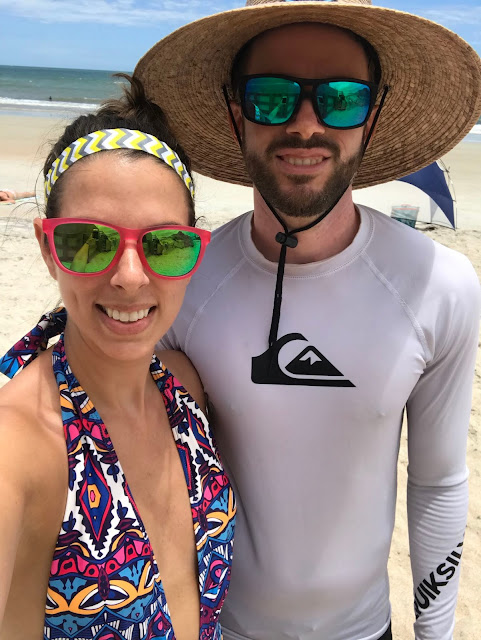 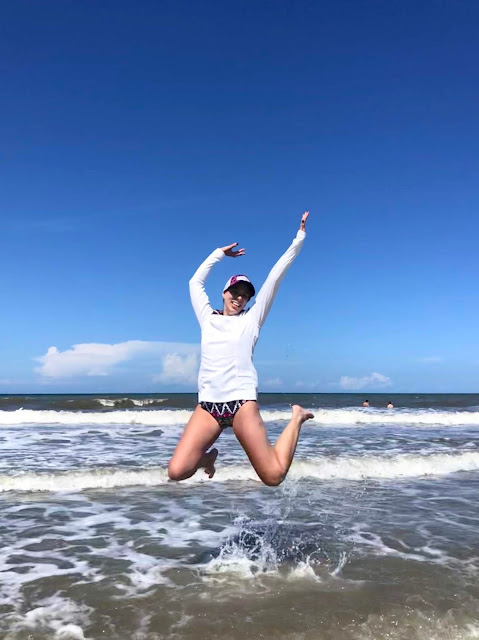 I managed a run on Sunday morning; despite living in Florida, I've never actually run on the beach before. I always run along it on pavement. I decided, though, to give beach running a try, as the sand seemed pretty packed and the sunrise was unbeatable over the ocean. I will say it was a lot tougher than I expected, but I enjoyed it a lot! 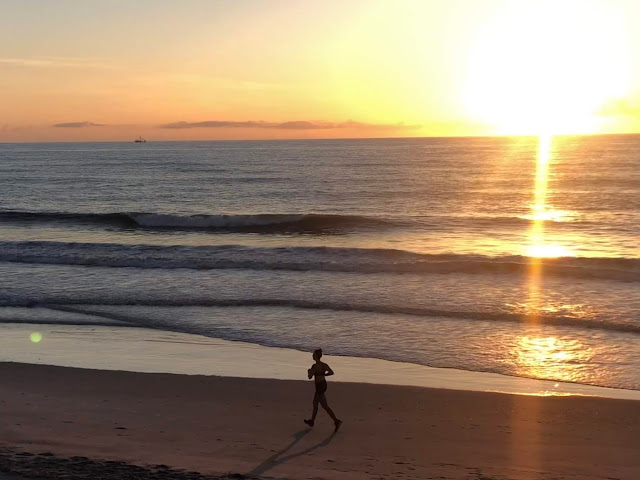 Matt also got some surfing in, which he can't usually do on our coast because the Gulf has smaller waves than the Atlantic. 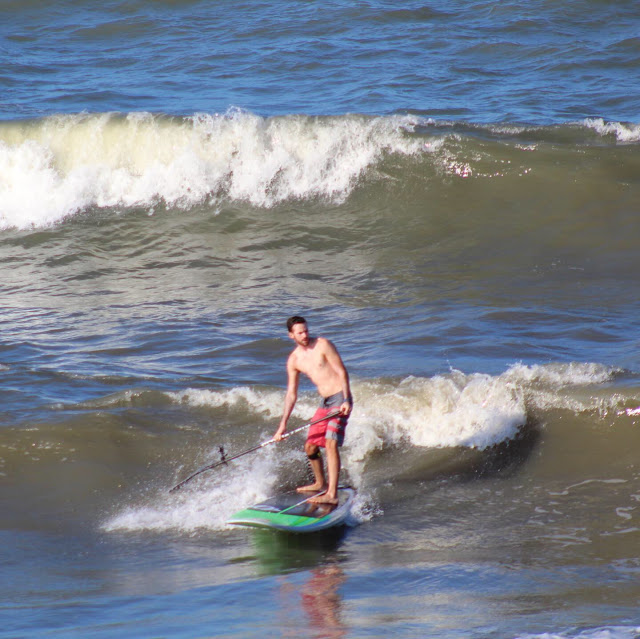 After a huge family-style dinner and birthday celebration, we headed out to our hotel. Here's a video of Mark's incredibly dangerous and amazing birthday candle:
Monday, we spent the day walking around the Old Town part of St. Augustine. The city is the oldest continuously inhabited European-established city in the US. The history is pretty interesting (the museums don't sugarcoat the treatment of the Timucua by the Spanish colonists) and the atmosphere and architecture are beautiful. St. Augustine is also home to the country's oldest still-standing wooden school house, which I always think is some fun trivia.
After touring around, we got ready for the concert, grabbed some dinner, and headed to the St. Augustine Amphitheatre. We had plenty of time to find our seats and get comfortable before Courtney Barnett opened. Matt and I really like her music, and I have to say I was blown away by her live performance. I hadn't even realized she was opening until the day before, so it was a treat to see her! 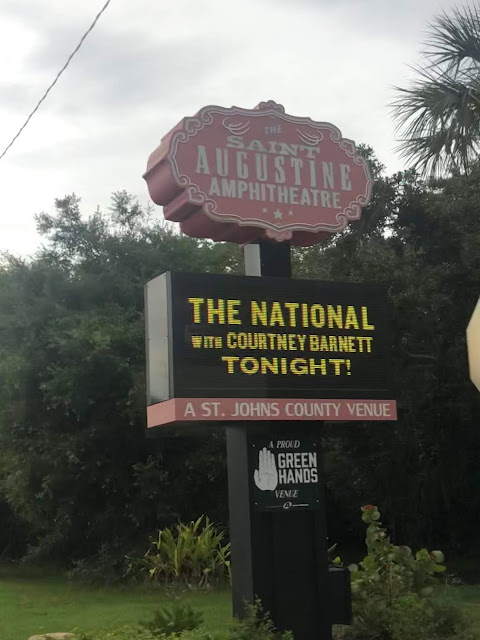 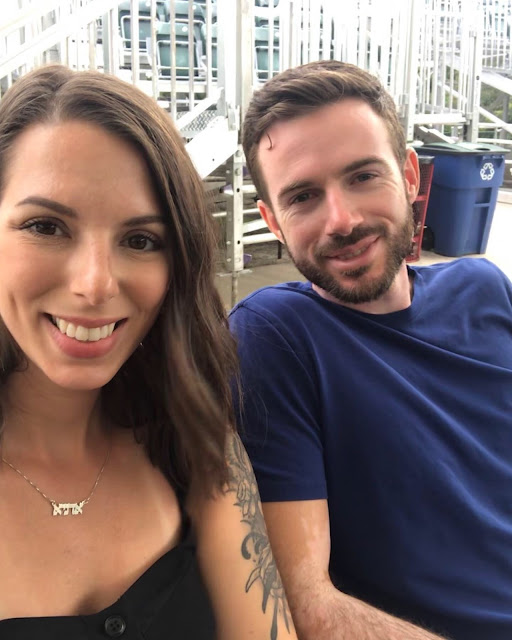 The rest of the concert was incredible. The National is one of those bands that gets to the heart of human nature through both their sound and lyrics. Matt Berninger (the lead singer) came out into the audience a few times, climbing pretty far up into the stands. I didn't get very many photos because I was trying to just enjoy myself and take it all in; I pretty much took one when they first came out and then a couple little videos.

Although they didn't play Matt's favorite song of theirs, they did play quite a few of mine, and I admit I teared up during Bloodbuzz Ohio.


June 17, 2019 || St. Augustine, FL . You Had Your Soul With You Quiet Light The Pull Of You Hey Rosey Don’t Swallow The Cap Bloodbuzz Ohio Oblivions So Far So Fast Where Is Her Head Green Gloves Peggy-O Brainy The Day I Die Pink Rabbits The System Only Dreams in Total Darkness Hard To Find I Am Easy To Find Graceless Fake Empire Rylan Light Years Mr. November Terrible Love Vanderlyle Crybaby Geeks . Photos by Bella Blasko
A post shared by The National (@thenational) on Jun 17, 2019 at 7:05pm PDT

The set list
For the last song of their encore, Vanderlyle Crybaby Geeks, they played the instrumental while the audience sang, urged on by Berninger. It was so, so beautiful.

I don't know why we don't attend more concerts. Hearing songs I love as they are filled with raw, pure energy straight from the band directly to my ears? What's better? And there is just nothing quite like singing your heart out with the band to music that means something to you...surrounded by strangers also singing their hearts out.

I am hoping to make concerts a more frequent thing, because it was 100% worth the trip and an experience I'll remember forever.