Before I even get into the recap of this race, I need to rant a little. I may be spoiled, but most of the races I've run have been organized to perfection and go smoothly. While Matt and I had fun at our relay this weekend, I have a few gripes I need to get out of the way.

Bear in mind, this race is in its 13th year, so it's ridiculous for these kinds of mistakes to still be a problem. Now, I went back on the website and it appears that the organizers are using runsignup.com now and website-related issues are fixed, but I still want to mention them because they made life frustrating.

Sign Up: I began trying to sign up for the relay option back in July. The webpage is supposed to have a spot, upon choosing the "2-person relay" option, to join an existing team or create one. This part of the signup process was missing until last month. By that time, the price had increased. I wrote to the race organizer and the website tech support at least a half-dozen times before it was fixed. At that point, the organizer did give me a discount code so I could sign up with the original cost, but the fact that it was so impossible to get in touch with him and get this simple mistake fixed was irritating.

Packet Pickup: Pickup was in a small running store where there was a single table, staffed by three people. With a race this size, a larger venue, multiple days for pickup, or multiple tables should be the norm. Also, Matt and I waited in a line that literally wrapped around the store only to be told that relay runners needed to speak to a different person at the table, so we had to get into a second line and wait again. A sign indicating a separate line for relay runners would have been a simple way to avoid this frustration and confusion.

Logistics: The race website says relay runners wear a clip they can attach to a belt and hand that off at the checkpoint. I knew going in we'd be running with a baton instead, but only because Kristina warned me ahead of time. Why is this information not updated on their website?

Race Start: I'll get to this in more detail, but the starting corral was ridiculously narrow and we started 6 minutes late because the drawbridge was up. The drawbridge raises every quarter-hour and three-quarter hour; the schedule is posted. The race organizers should have changed our start time to account for that, or at the very least told us why we were delayed as we all stood in the corral. No one ever got on the mic to say, "Oh hey, the bridge is up, please be patient!" Is communication so much to ask for?

All that said, the race itself was a success and I'm so glad Matt agreed to run it with me. So, on to the recap!

[I've included Matt's parts of the recap in italics.]

Our plan for the race was simple: I would run the first half because I don't handle sun and heat as well as Matt. I would keep a conservative pace of 10:00. I felt confident in tackling the bridge twice. Matt would take the second half of the race, making up for lost time with a goal pace of 8:10. We'd finish together. (Duh.) 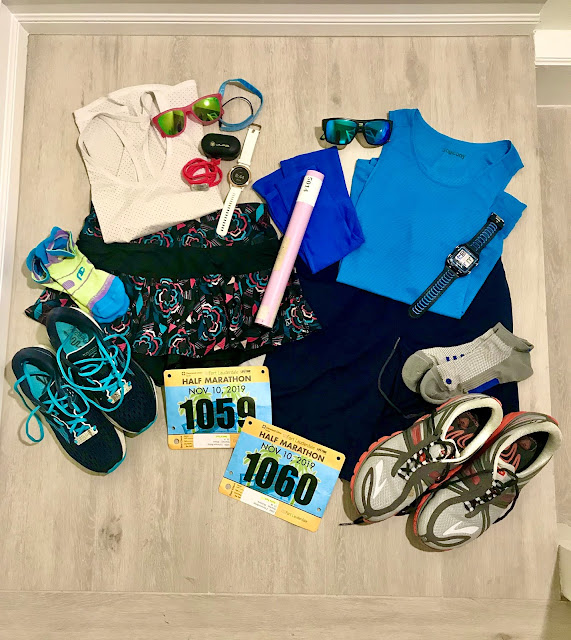 On Sunday morning, Matt and I got up around 4:30am. Oden has bought a new townhouse, and we were staying with him as is our usual plan for Fort Lauderdale races. Luckily his new place is close to the old place; just as convenient, and actually on this race's route.

After getting dressed, making coffee, and using the bathroom 100 times, we drove the ten minutes to the new Las Olas parking garage.

We arrived an hour before the start and got prime parking. This race was the first I planned to run fasting. I brought a Gu with me just in case, but I didn't plan to eat ahead of time. I had some black coffee in the car and chased it with some water. 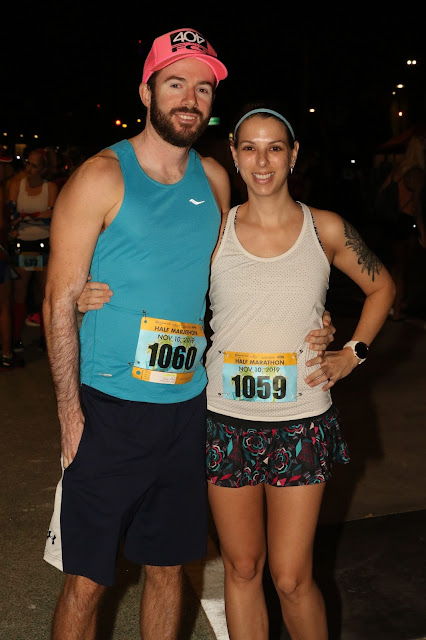 We had plenty of time to walk to the start, use the bathroom, and stretch. It was windy and cool (like...74 degrees, almost chilly!) and the sun wasn't up yet. The announcer let us know when we had 30, 20, 15, and 10 minutes before the start. I got into the corral with about 5 minutes to spare.

It was incredibly narrow and crowded; I don't think I've ever been in a corral that took up only one side of the road for nearly 700 runners. 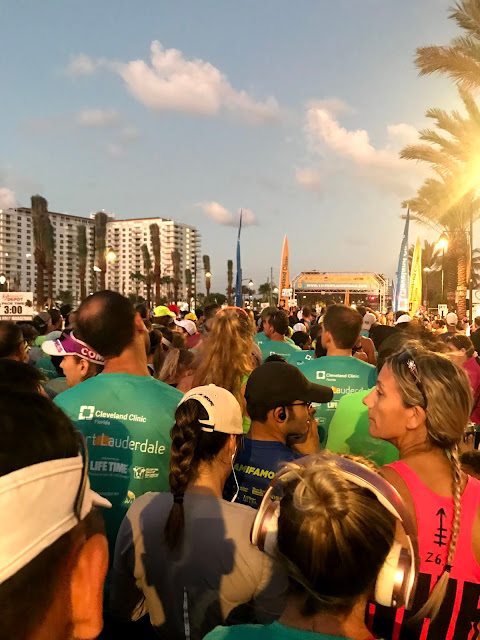 The start was delayed; despite being reminded to get into the corral multiple times, we ended up starting at 6:21 instead of 6:15 because the drawbridge was up. I can be flexible when it comes to delays, but I didn't appreciate being herded into the corral and then not being updated with the reason for the wait. 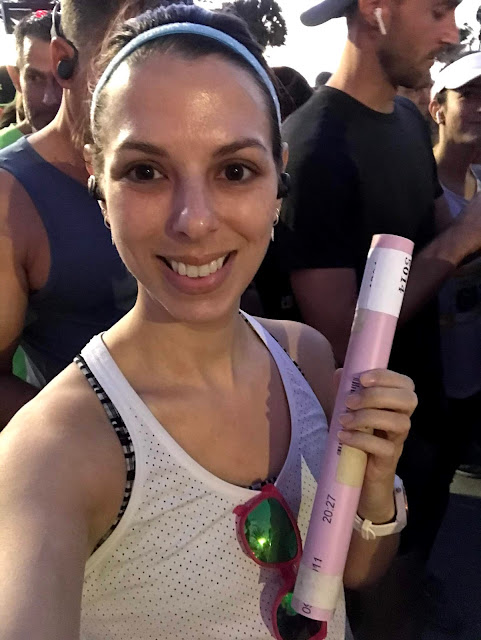 When it was finally time to go, I felt ready!

My goal pace was 10:00; I was treating this race as a training run for Ragnar, not as a goal race in and of itself. I wasn't planning to push it too hard.

My route took me immediately over the East Las Olas Bridge, then down into Victoria Park. I was prepared to run the bridge twice, but was a little less prepared for the rolling hills along parts of the route. 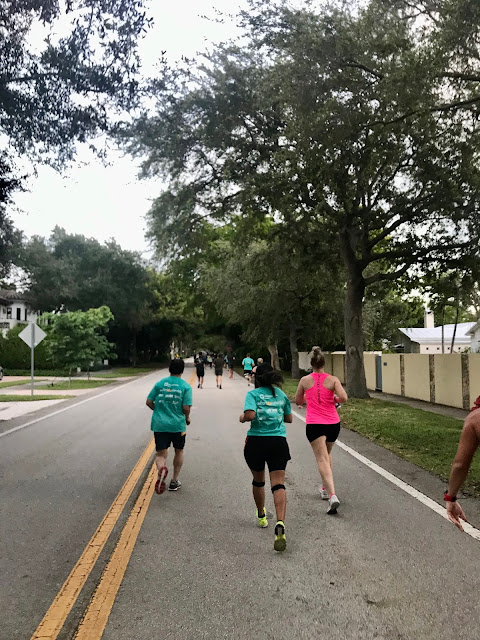 Although we did go through some neighborhoods, most of the race was very pretty!

After Ali crossed the start line and disappeared from view, I walked to the car to put our things away and put on sunscreen. Then I went to the exchange point. It was completely unmarked (more disorganization) but there was a timing mat so I figured it was the halfway point. At first there weren't very many people there.

I was tracking Ali and knew I'd have at least an hour from the time she left, so when I got hungry I walked to a CVS across the street and bought a donut.

Admittedly, my legs felt pretty heavy and tired for the first couple miles. Around mile 2.8 I ran right past Oden's place, where he was waiting to cheer. I called out, "Almost at three miles!" and he called back, "Alright, looking good!"

Oden texted me when Ali ran by his house. I was also tracking her on Find Friends, so I knew when she'd be close. 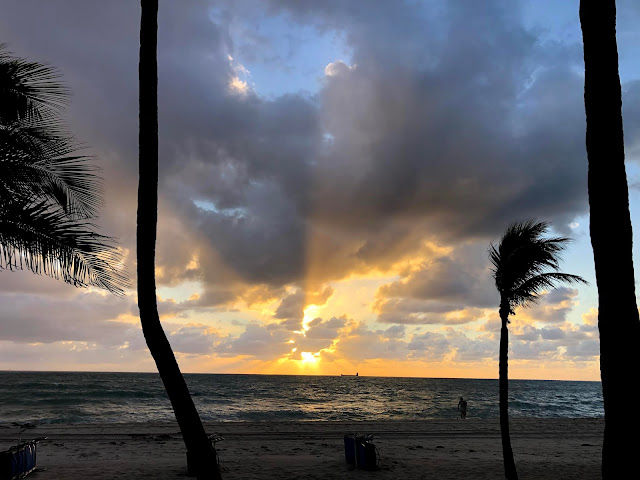 Around mile 3 I finally started to loosen up. I was getting hungry, but didn't really want to eat anything.

I got to see other hand-offs while I waited, including the Paraguay team that came in first in our division. I saw another guy who spent a lot of time looking for his partner, slowing down and even running backwards, but couldn't find them, and so he just kept the baton and kept on running!

Being off the beach, I had a bit of a breeze but nothing major or distracting. I got some welcome drizzle around mile 4.
I started to struggle a bit at mile 5, but by then I knew I was almost done. As I turned back onto Las Olas, I found myself facing a headwind as I ran back up the bridge. This was the hardest part of the race. I managed to talk myself out of walking the bridge.

By the time I hit 6.25 miles, I was feeling great. I caught sight of Matt's bright pink hat as I neared mile 6.5 and put on a burst of speed. I raised the baton in the air, grinning. I handed it off to him and said, "Good luck, have fun!" and off he went.

Finally, I saw Ali. I took the baton and was on my way.

Not five minutes after seeing Matt, Oden met me. He had ridden his bike over to see us finish. We hung out for the hour or so it took Matt to get back to us. During that time, the wind picked up and it poured for awhile. Then it stopped and got sunny again. Ah, Florida. 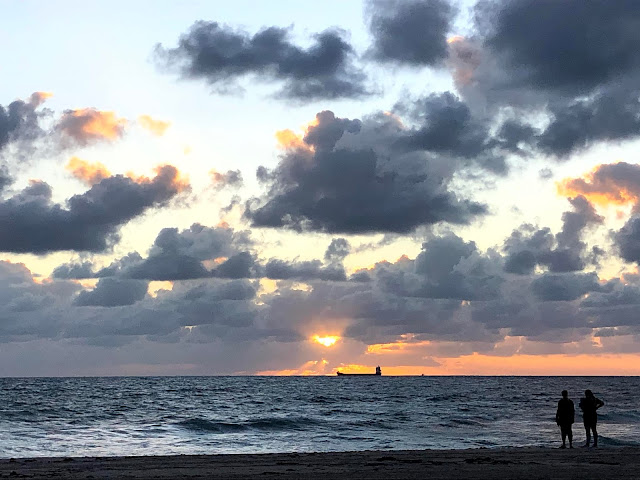 About a mile in, I got poured on. That's when I noticed my wet shoelaces coming undone and realized I had never tightened them before we started, so I stopped to tighten both of them, but I didn't lose much time. I passed five or six other runners with batons.

The rain came and went. At times the wind felt helpful, but there were also times I had to put my head down and power through it. 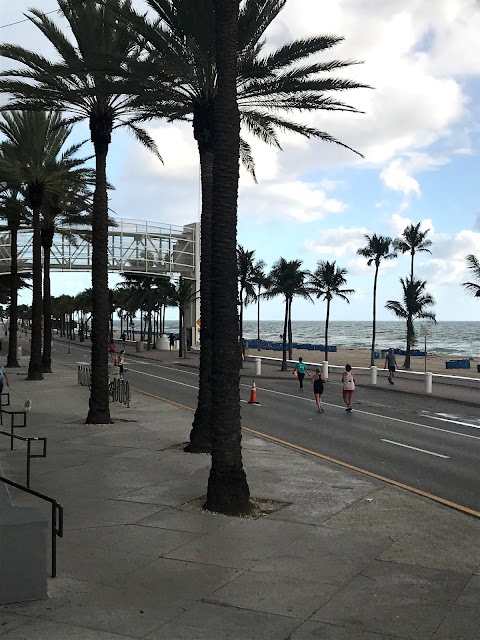 At the turn-around point, I felt tightness in my hip, and I was forced to slow down a little. For a brief moment I thought I might have to walk, but I'm used to powering through discomfort in paddling and the tightness worked itself out as I kept going and I was able to pick up my speed again.

Then I started paying attention to what mile I was at. I saw the sign for "mile 12" (mile 5 for me) and mile 12 seemed to last FOREVER. Finally, I saw Ali and Oden back where I'd left her, and I waved her ahead, wanting her to jump into the race. I expected her to be a lot closer to the finish line, like near the last corner where you turn in, but she was about a quarter mile out. 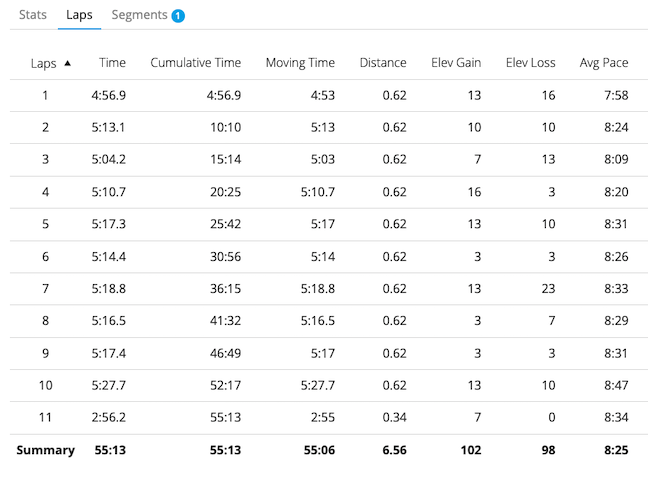 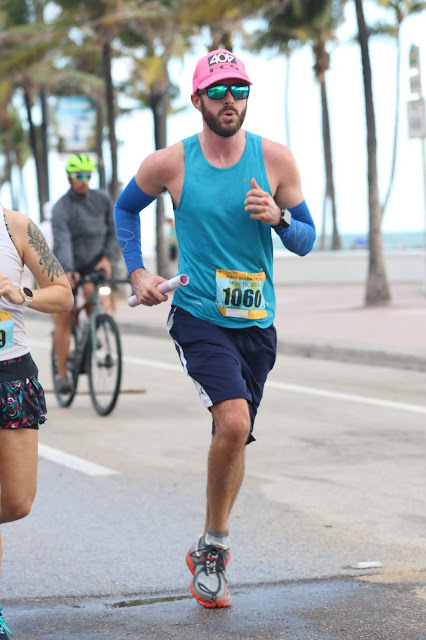 I was worried she wouldn't be able to keep up the pace I was going, especially because I usually like to finish strong and empty the tank. I shouldn't have worried, because after an hour of rest, she was able to keep up! 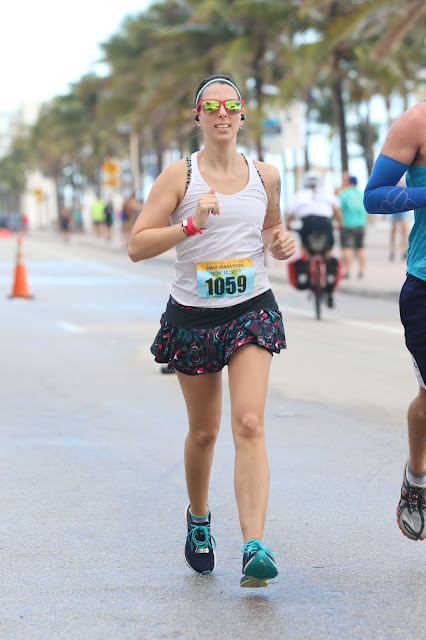 I hopped in next to Matt, feeling totally refreshed and ready for a final sprint. 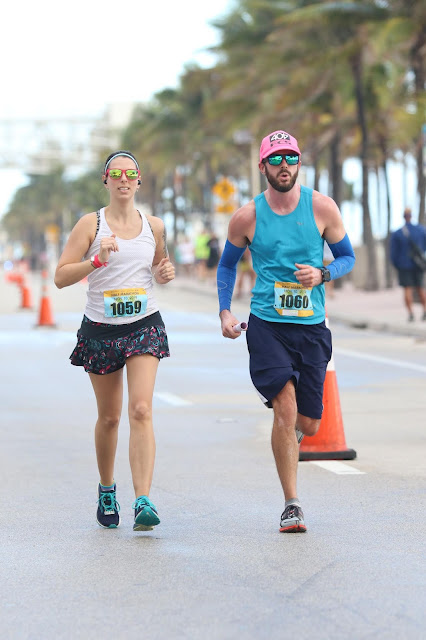 I was grinning like a dork the entire time. As we turned the final corner, Matt held out the baton. I took hold, and we crossed the finish line together. 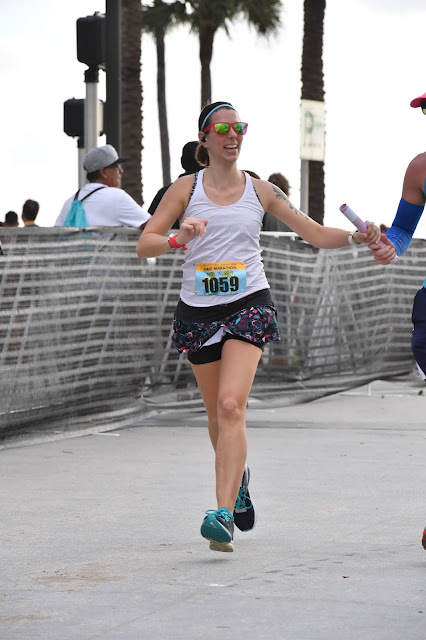 It felt really special and fun to finish a race together. I love sharing running with Matt and this was the first event of its kind for both of us. I really enjoyed the team aspect and the relay itself; I liked only having to run 6.5 miles and sharing the victory. 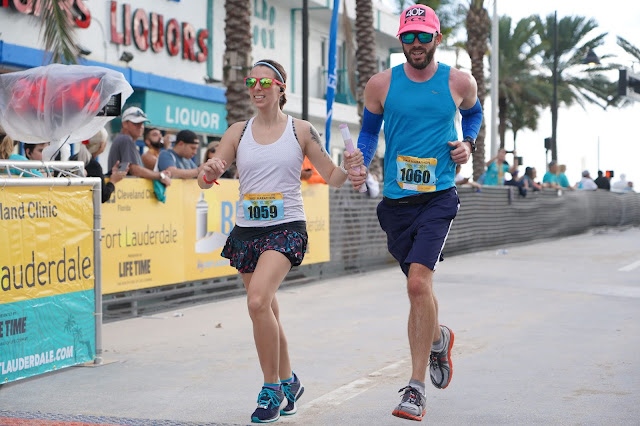 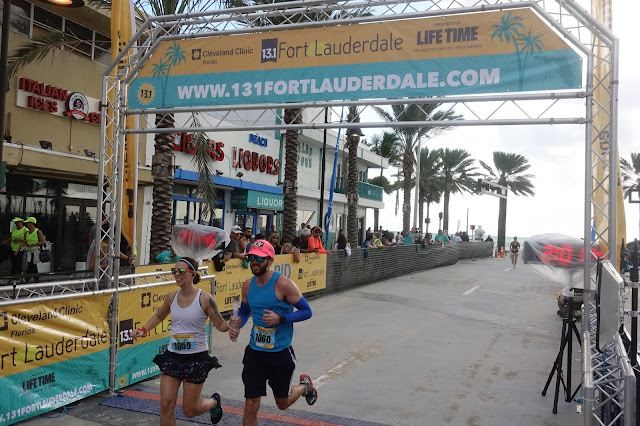 After we finished, we checked our results; we'd placed third in our division! We waited around for an hour because we thought we'd win a plaque, but it turns out only the first place relay teams in each division get anything. Oh, well. 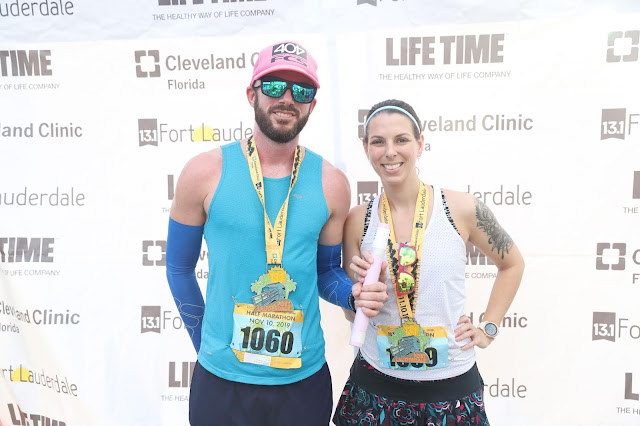 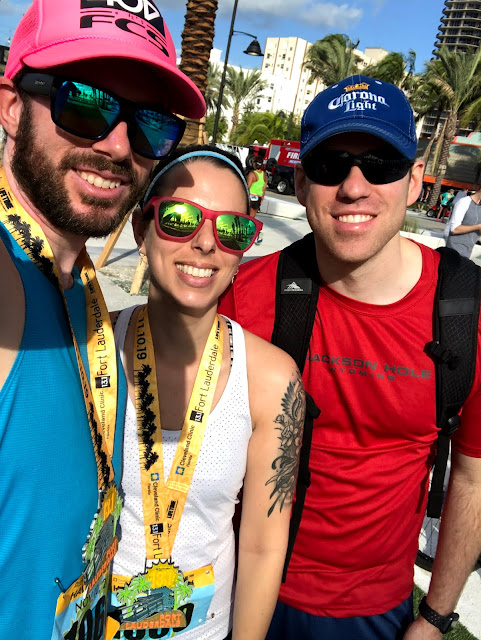 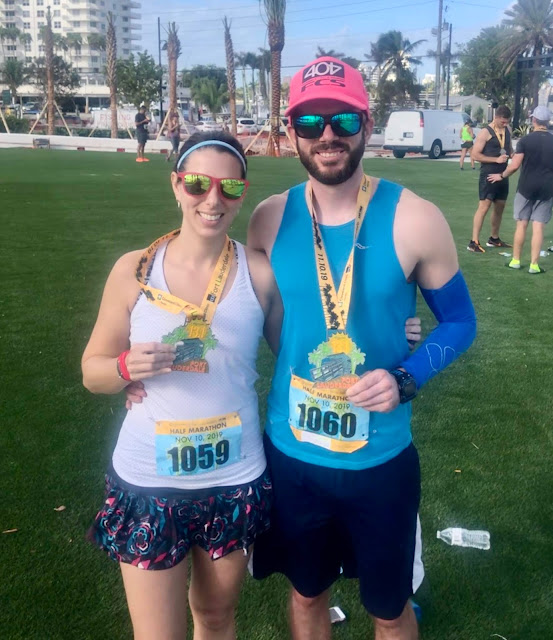 Once we checked the official results, we saw that actually we'd placed 2nd! This half was clearly the fastest of my life. 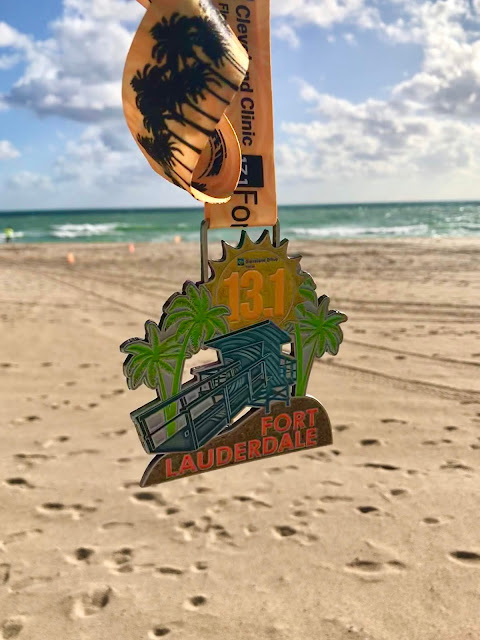 After heading back to Oden's to clean up, we went to brunch at the usual place after a Fort Lauderdale race, then hung out until it was time to head home. 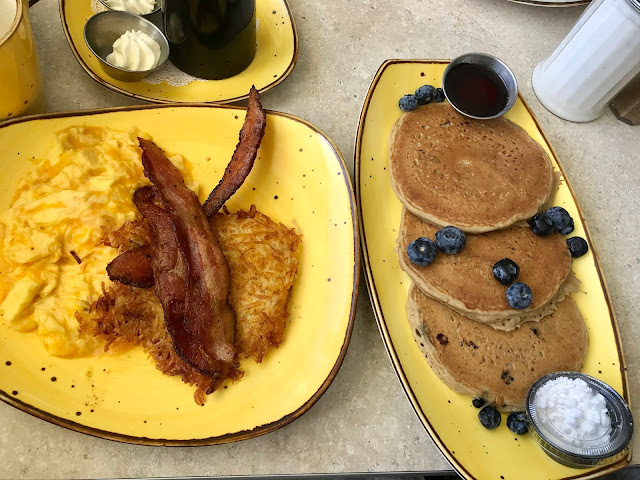 Over all, I enjoyed this race. The lack of communication was frustrating, but maybe that's a moot point for future years considering the new signup website.

We may not repeat this once, but if I can find another half marathon relay to do together, I think I'll try to talk Matt into it! 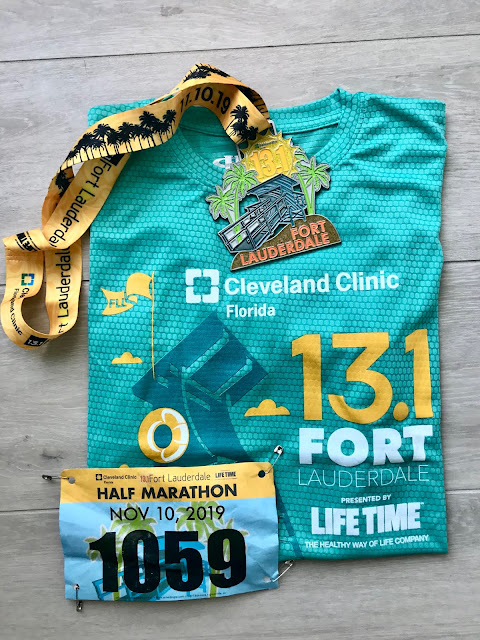