I bought my (and Matt's) Tracer360 with my own money and I'm not an ambassador or anything, but they're having a sale right now so I highly recommend you jump on that!

For months I’ve been seeing the Noxgear Tracer 360 on my various social media timelines. It never felt like a running accessory I really wanted or needed; I’ve been running when the sun is up (because I haven’t been running in the mornings) and I always run on sidewalked roads flanked by streetlights.
But a few weeks ago there was a sale and a friend gave me an ambassador code and I made what was partially an impulse-buy, partially a result of months of exposure. Those ambassadors know how to get in your head! 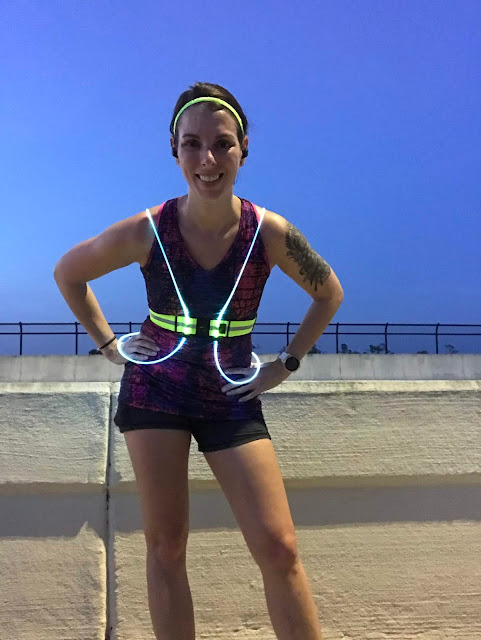 The first time I wore it, I was a little shocked to find how much I immediately loved it. Fit and ease-of-use aside (we’ll get there), the biggest check in the pro column for this nifty light-up harness is the peace of mind it gave me! I hadn’t realized the low-level anxiety and stress running in the evenings was having on me until I was free of it.
The Tracer 360 made me feel immediately safer. It put my mind at ease. I didn’t feel invincible, but I felt noticeable.
At one point on that first run, a couple of cyclists caught up with me as I waited at a crosswalk and asked me where I had gotten it, praising how safe I was.
Another time I wore it, I passed an elderly man who was out for a walk. He told me, “I could see you coming!” I called back over my shoulder, “That’s the point!”
The Tracer 360 is lightweight and barely noticeable, especially if you’re used to wearing a sportsbra. The band is comfortable and snug, but not compressive. It stays in place. I can easily reach the on/off button mid-run. While I had no problem adjusting the straps/tubing so they don’t flop or hit my arms while I run, Matt did have some trouble with his. He found that by looping the excess tubing into the band, he eliminates the wayward straps and everything is still comfortable.

Overall, I’m really happy with this purchase. It was something I got on a whim, thinking I’d take advantage of a sale, and now can’t imagine how I ever ran without it. It’s become an immediate staple. 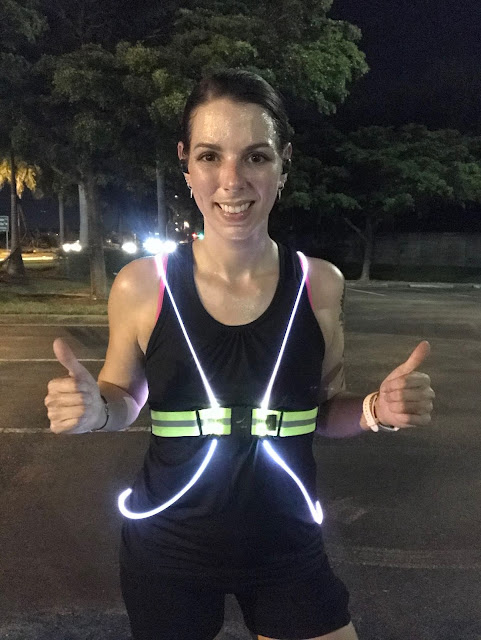 The last thing to note here is the longevity. I’ve only had my Tracer 360 for a few weeks, but I’ve heard from multiple friends that theirs have lasted upward of five years.
The price may be daunting, but the peace of mind and increased safety is priceless. Noxgear has sales fairly frequently, too, so you can be on the lookout. I highly recommend snapping up a vest if you tend to run at dusk or before dawn. I can’t believe it took me so long to get onboard.
ABK
Posted by Ali K.