In the past, I've been on the fence when it comes to virtual races. I've done some, but it's hard to justify spending the money when you don't get the whole race experience. And I feel like there's a little bit of a stigma attached - oh, you ran the distance, but did you really race? Does a virtual race count?

Then 2020 came along, and with it came a wave of race cancellations. Suddenly, virtual races made so much more sense!

ZOOMA's Amelia Island race series has been on my bucket list for years. I went on a school trip to Amelia Island when I was a junior in high school and fell in love. It's such a gorgeous place; exploring it via a half marathon sounded like the perfect experience.

Unfortunately, I didn't make it a priority and now I live across the country. When ZOOMA and Skirt Sports paired up, though, it was the perfect opportunity to celebrate by signing up for the virtual race. I definitely didn't feel up for a half marathon and knew that my timeline for training would be tight, so I opted to run the 12k.

As I said in an earlier post, the majority of my runs lately have been in the 2-3 mile range. After running the Gasparilla 15k in February, I just didn't have the time or mental capacity to keep up with long runs; so, that's where I started when I began training for Amelia Island in late August.

My training basically consisted of lots of 3ish mile runs, a couple 5-milers, and then race day.

I opted to run my race at Seward Park during the week when it would be less busy. I had brunch (two scrambled eggs and GF oatmeal with a drizzle of maple syrup) around 11:30am and arrived at the "venue" just before 2pm. 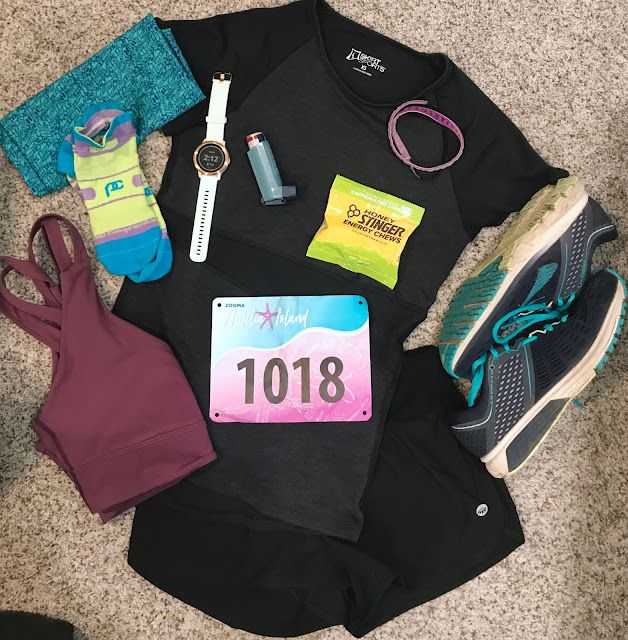 The weather was gorgeous, in the mid-50s and sunny. Having (mostly) learned my lesson about dressing for cooler weather, I opted for shorts and my Wonder Wool tee shirt. (I didn't post a flat!Ali picture the night before because I didn't know what I was going to wear until the morning of! Last minute outfit decisions are definitely a perk of running a virtual race.)

I warmed up quite a bit during the run, but never felt overheated. This outfit was a good choice! I wore a buff instead of a mask; I figured my route would be pretty unpopulated and the buff would help with my breathing more than a mask does.

On that note, I put my inhaler in my back pocket because another lesson I've learned since moving to Seattle is that mid-run puffs are sometimes necessary in cold weather.

Matt set up his hammock and I started my run. 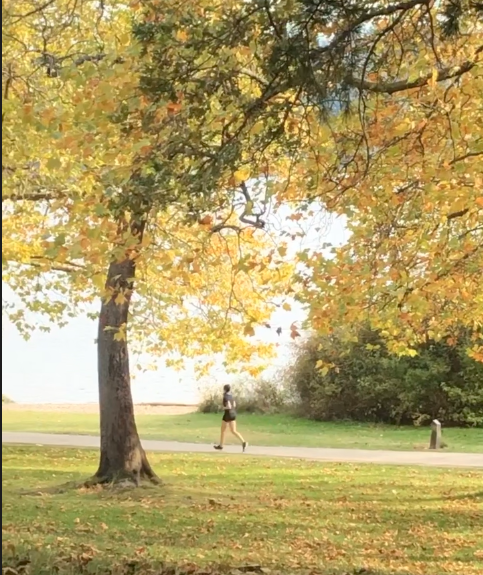 The paved circle at Seward Park is about 2.4 miles. I figured I'd run it three times, giving me plenty of opportunities to stop at the car for water or whatever I may need. My plan was to run the first two laps counterclockwise (the more difficult direction) and the last lap clockwise.

The day was absolutely beautiful, but I felt sluggish at first. For whatever reason, I still felt pretty full from brunch. I think my body hasn't really adjusted to midday runs.

Once I finished the first lap, I took a puff of albuterol and made a pit-stop by Matt to have some water. I had a feeling my second lap would be the easiest/most enjoyable of the three, and I was right. I felt much better for these middle miles, finally warming up and finding a good groove.

I may not have been running Amelia Island, but the views I was treated to were worlds beyond any virtual race I've done before. They certainly beat my usual Florida neighborhood views. 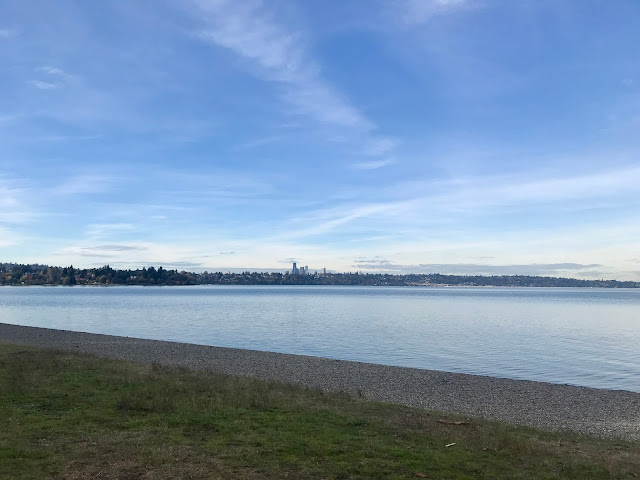 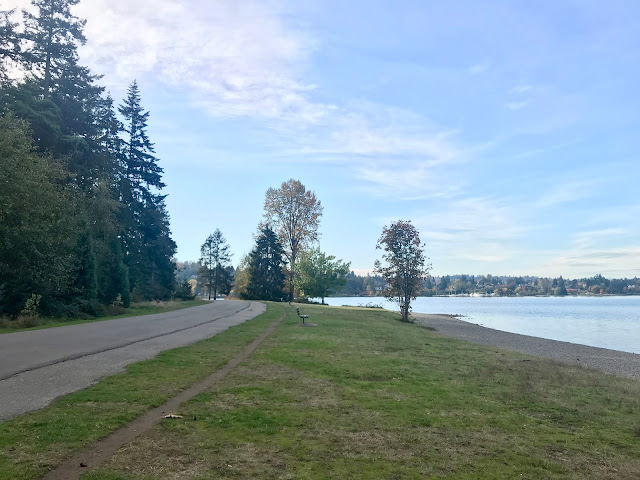 Around mile 5, at the end of the second lap, I began to feel tired. I turned around and started the final lap; around 5.7 I paused to eat two Honey Stinger Limeade chews and send Elizabeth a WhatsApp message.

I had to keep my running buddy updated on my race! The snack carried me the rest of the way, and I finished the race feeling pretty strong.

As I climbed uphill to Matt's hammock, he leaned out, holding up my medal. He slipped it over my head. It felt like I'd crossed a finish line. 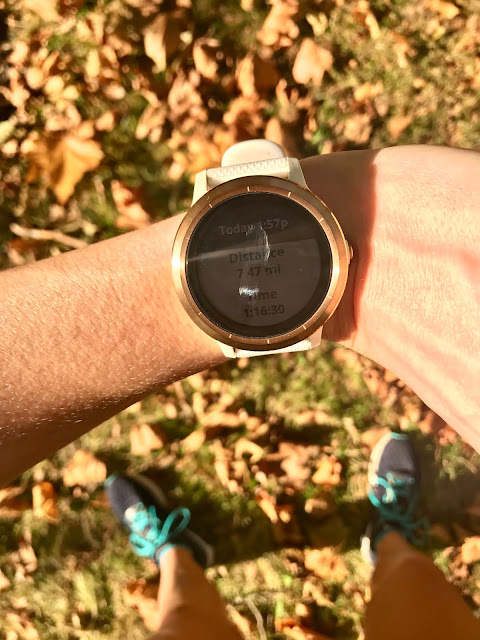 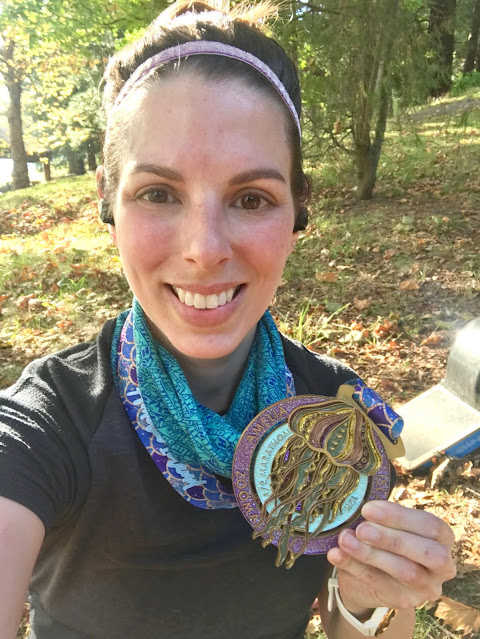 If I'm honest, I didn't put any thought into race day. I just picked a day and decided I'd fight through it if I wasn't prepared. I didn't have a plan for execution, or even an inkling of my target pace. I'm glad that I was able to complete it before the end of October, which was my only goal, and that I felt fairly decent the entire time!

After stretching and cooling down, I took my usual post-race photos. It's been so long since I've raced, I kind of forgot what all I had to do! 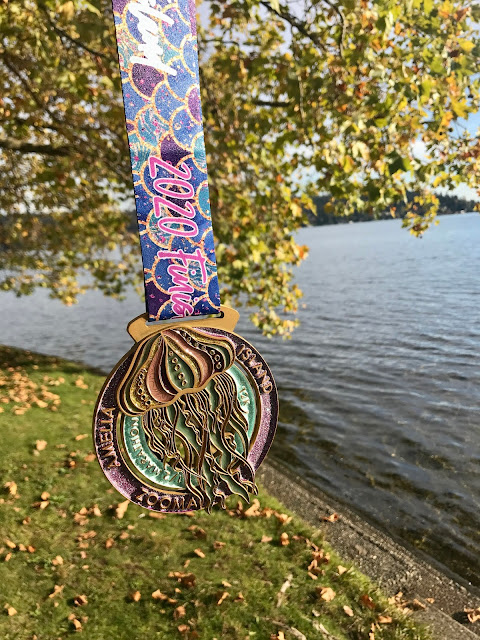 My original plan had been to finish the race and head over to Nuflours for a gluten free goodie, but I forgot that they have limited hours due to Covid. They were already closed when I got back to the car. I guess I will save the celebratory brownie for another day!

Instead, I indulged in a too-hot shower and made myself hot chocolate.

Remember when I said it's hard to justify the price of a virtual race, given that the perks are generally scanty? Not the case with Amelia Island (or ZOOMA races in general). My swag bag for the race came a week before race weekend and included a backpack that I immediately adopted as my new running bag. (I've been using a reusable grocery bag for the last few months!)

The medal is stunning, featuring a glittery jellyfish on a vibrant, mermaid-scale patterned ribbon. Is it any wonder I couldn't turn this race down? 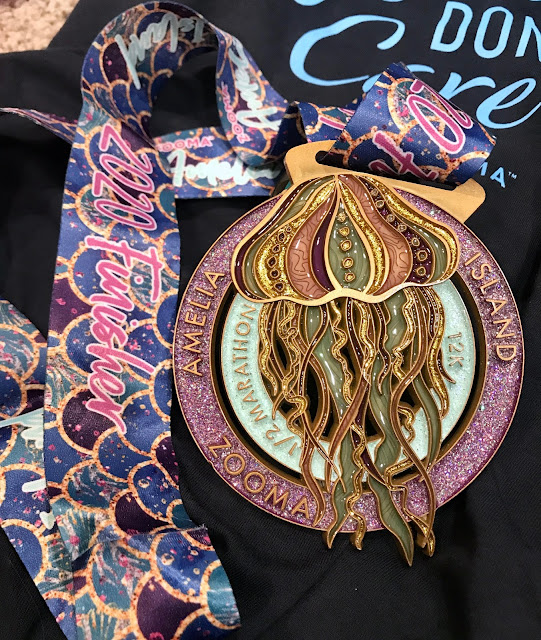 The truth is, I've been over racing for a little while. I kept trying to get myself excited to race again, but after dealing with CECS, my perspective has shifted and I've just been running for fun. Training for Amelia Island was a good reminder that challenging myself can be fun, too.

Around mile 6, I thought to myself, "Oh right, this is how long runs feel!" I struggled in the last two miles or so, but I was also filled with excitement at the prospect of doing more than I've done in ages. 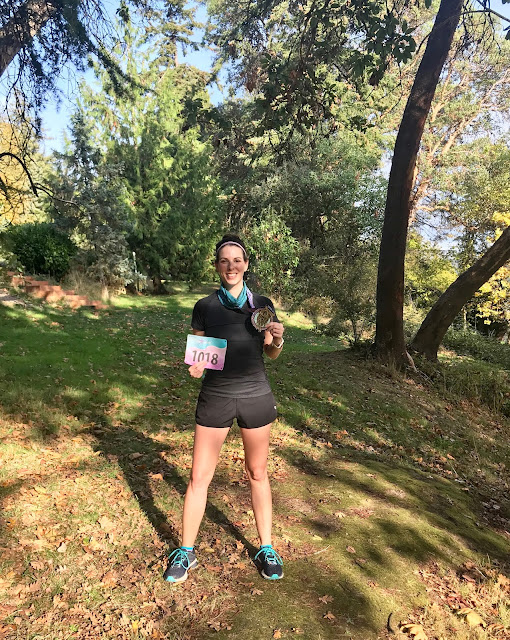 That's all to say, I think I'll keep tacking on mileage while I enjoy it, and I think I'll sign up for some more virtual races. I really enjoyed the excuse to run long and get rewarded for it!