There's a post in my drafts I'll never publish. I wrote it back in June, when a friend of mine unexpectedly passed away.

Between late May and mid-June, I had taken some time off running. My mind wasn't in the right place and I was struggling through a depressive episode. Then, just as I was coming out of it — this news. This terrible sucker-punch.

This friend was a runner — that's how we met — and I ran a couple miles in her honor. In that moment, I felt a distinct shift.

I had been feeling unfulfilled, putting too much emphasis on external validation and finding it lacking, and somehow this tragedy shifted things back into focus. Like the final hard slap that gets a stuttering machine back in sync.

What are Instagram likes in the face of this kind of devastation?

She became my first thought every morning. She seemed to sit on my shoulder all day long, constantly putting things in perspective. Her presence was both comforting and heavy.

It was here, in this emotional state, in this mental place, that I finally got some clarity.

I got back to running. I got back to therapy. I made a schedule. I stuck with it. I explored some new things to help me find joy again. I dedicated myself to running and Peloton — rides and strength workouts — and finally found the courage to join the running group I'd been watching from afar for nearly a year.

I met a few women I connected with. We started running together outside the running group. I think this may be my first friend group in Seattle.

My silence has extended beyond this blog. I took a huge step back from Instagram and rediscovered internal validation — that wonderful, lifegiving feeling of doing literally anything for its own benefit alone. I stopped posting my workouts and focused instead on doing what I'm doing for me.

It's been a weird six months, on top of the weird year that came before. But here's what I know: I feel strong. I feel grateful. I feel hopeful. And, most importantly, I feel like myself again.

One thing I've really been working on in therapy is rediscovering myself. Whether this is typical of adulthood or not, the truth is that I lost myself over the years. I spent so much time working — taking my work home with me literally and figuratively — that I fell into a routine that left no room for spontaneity or exploration.

I was forced to acknowledge that I link my self-worth to my work, that I defined myself by my job, and — simply put — that made me incredibly sad. I am not my job. None of us are.

Now, I love having a job I can leave behind me at the end of the day; when I close my laptop I am truly done until the next morning. That's invaluable. It allows me to feel productive and useful at work while leaving time and mental energy to do other things.

So, where have I been? I guess I've been in hibernation, doing some work behind the scenes to prepare myself for whatever comes next. I feel the best I have in a long time, and I'm only going to continue getting better.

It's been a long time since I've raced. My last in-person race was the Gasparilla 15k with Jessie in February 2020, and that's really the last race I'm counting because the virtual Amelia Island 12k I did last October just...didn't feel like a race.

When Tall Sarah floated the idea of a Halloween 10k, I figured that would be a good chance to test the racing waters again. I'm vaccinated, 76% of Seattlelites are vaccinated, and it's outdoors. I feel like racing is safe again.

It's been so long, though, I figured I needed a 5k before that 10k to test out pretty much everything — clothes, breakfast, pace, etc. That's where the Where's Wenda 5k came in. 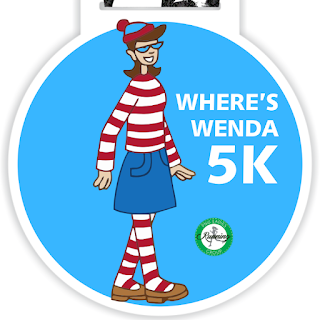 Breakfast was homemade overnight oats (not to be confused with my preferred breakfast during the week: Oats Overnight) consisting of a packet of instant oatmeal, half a scoop of protein powder, and almond milk. I managed to eat half of that and half a cup of coffee around 9am. I used the bathroom four times before taking half an Imodium.

I got to the park around 9:20. The race start was 10am — something weird to get used to, since Florida races always start around 6:30 or 7:00 — so I had plenty of time to grab my bib, use the porta-potty, and do an easy warm up jog with Standard-Sized Sarah, who registered that morning. We got lucky with the weather: it was supposed to be rainy and windy, but ended up being 50 and overcast, which is pretty perfect for a race.

We agreed to go at our own paces, to start together and meet each other at the finish, but we ended up running the entire race side-by-side. 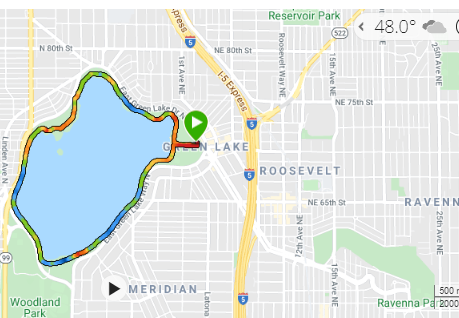 I didn't want to get too strategic considering how long it's been since I've raced a 5k. I wasn't even sure what I was capable of, seeing as most of my runs these days are 4-6 miles at an easy pace. Still, I have such a hang-up about racing 5ks, I always want to come in under 30 minutes, and this race was no exception. I programmed my watch for a sub-30 5k so I could at least keep track of my paces and scrape in at 29:59 if necessary.

Anyway, the race was small. They had a virtual option and I'm sure people opted to do that. It was fun to see so many runners dressed up as Waldo. Sarah and I lined up right at the start because there were quite a few little kids we wanted to get around early on.

My usual 5k looks like this: go out way too fast, slow down to a sustainable pace, hit the wall at 2.6 miles and walk a bit, sprint the last .1. This time, I somehow managed to settle in to a challenging but doable pace from the beginning, maybe because Sarah told me she tends to start slow and then speed up, and I wanted to stick with her as long as possible.

There's something to be said for pacing yourself. The first mile felt a touch too fast, but not as out of control as I'm used to. The second mile had two small hills that we slowed down on, and I could tell Sarah was struggling a bit so we reined it in.

The race was around the park we usually run in anyway, and it was open to the public, so we had to do some dodging and weaving. Around 2.5 miles we came up on a group taking up the entire path and I had to shout at them (politely) so we could get through. However, we never walked and we didn't have to slow down much. 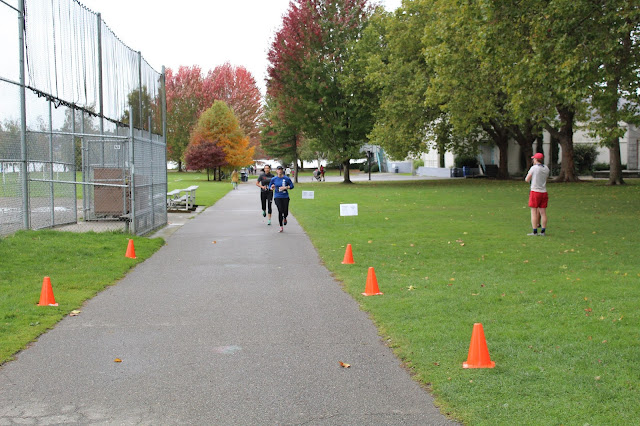 Looking at my watch while it ticked down the distance was super motivating. When we had .3 to go, we both started kicking it up into a higher gear, and I somehow found it in me to sprint the finish.

My watch read 3.04 miles with a pace of 8:58 — the final time was 27:17, well under 30 minutes and probably one of my faster 5ks. If nothing else, it was definitely one of my best executed! I think maybe we could have pushed a touch harder in the last mile, but I'm not going to lose any sleep over it!

I wish the results broke down age and gender results because I think I probably placed in my age group, but it was such a small race that the results aren't that detailed. All I know if that I finished 11th over all out of 64, and I can't hate that!

I think if we had split up, I may have given in and walked, so I'm glad Sarah stuck with me the entire time. At the end, I think we both felt really proud and impressed with how well it all went. 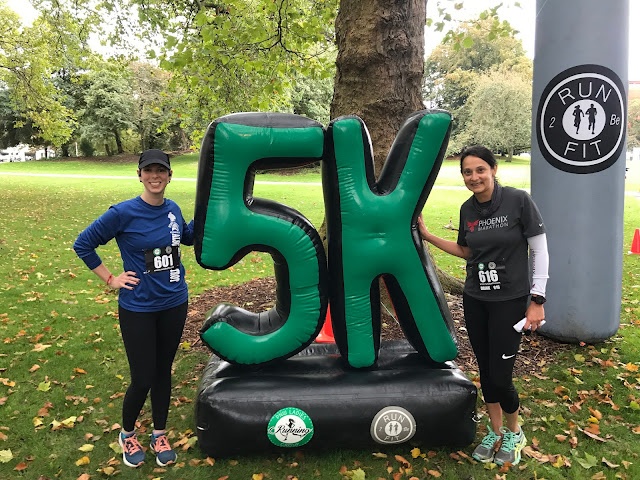 Strangely, now I'm even more nervous for the Halloween 10k. It's like...now that I remember how uncomfortable a race can be, the idea of pushing that hard for twice the distance is intimidating. But I have a couple weeks to continue putting the work in, so I'm trying not to think about it too much yet!

My goals for this 5k were to break 30 minutes and remember how races work, and I'd say I met both beautifully. Racing!Ali is back!