Yesterday, I experienced a bad run. Funnily enough, I didn't internalize any guilt over it, as I usually do, perhaps because I knew my fitness and ability weren't to blame. On the contrary, I even feel a little proud of this disaster.

I got new running shoes the other night...not really on a whim, but without having my strides re-evaluated like I'd planned. But really, I don't need new shoes yet; I just really want a pair. I ran these around the indoor track at the store and they felt wonderful. So, I bought them. Itching to try them out, I took them for a test Monday.

But here's where I went wrong. My run was a 3.5 miler (or so I thought), and the shoes gave me shin splints within the first 1/8 of a mile. But did I turn around and put my Nikes back on? Nope. I went for the full run, thinking, "Oh hey, maybe they'll get better."

Right. Here's the thing. My "3.5" miles was really 4.3. I didn't map it out beforehand, figuring I'd turn around and just run the same course back when Nike+ told me I'd hit my halfway point. But when that time came, I was on a loop, and I thought (wrongly, again), "Oh hey, this is a circle, so I'm halfway through and completing it would be the same as turning around." Except that the end of the "loop" was actually an extra .80 miles. Duh. I knew "half" the loop was .87, but somehow forgot that I'd have to complete the circle, thereby doubling it. (I know this makes little sense, but this particular path is shaped like an archer's bow, and I ran the curved part first, forgetting to add in the straight shot back.)

Basically, I had to walk some of this run because 1) LEG PAIN and 2) 4.3 miles was not on the menu. I nearly called M to pick me up. Well, I paused some of the Nike+ during walks, so it wouldn't affect my overall pace, but I did end up not pausing it for some, and then I ran the last 400 meters. Then I turned the thing off. Then I walked home. In socks. That's right: I took off the damn shoes and shuffled home in socks.

But, here's the thing. I learned something from this. I've learned that if shoes don't feel right, I shouldn't be wearing them, even if I loved them in the store and even if the brand is one I'm loyal to. (These weren't Nikes, but another beloved brand.)

And why am I kind of proud of this embarrassingly bad run? For one thing, I pushed myself harder than I have in a really long time. Last fall  I ran a few 4-milers and felt really strong and proud, but since then I've been capping myself around two or three. I've been doing this simply because my resolution to run "consistently", to me, meant not pushing the distance. But lately I've been feeling antsy and full of energy. I went out Monday craving a long, hard run that left me panting and sore. Well, I definitely got it. I stretched, iced, and took ibuprofen. Oh, and also: 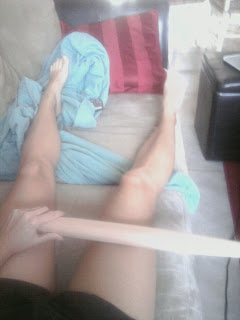 Yes folks, I rolling-pinned my legs. (This was an experiment based on "The Stick", which I'll get to in just a second.)

So anyway, I have no lingering pain today, although my ankles, feet, and calves were all stiff and sore yesterday. Although I feel up to a run today, and would actually really love to go, I'm going to take one more day to recover totally, mostly because my left ankle gave me some trouble toward the end of work. (Sometimes I wish I had a job that I could just sit at.)

I know I did a stupid thing. I'm sorry, body. But I'm glad I did it, and now I know what a gorgeous loop that archer's bow path really is (did I mention I'd never run this particular path before? Stupid) and I'll plan accordingly for the distance. But I do plan to run it again. It was just beautiful.

As for the rolling pin: "The Stick" is a plastic massager made for runners. You roll it over your muscles and apparently it's magical. Well, having done some asking-about regarding my usual knee pain, someone suggested it may be that my quads or Iliotibial band needs stretching/work. So I looked up how to handle that, and The Stick was recommended. Being cheap, I used my rolling pin instead. Boy did it work! It's not space-age plastic, but it made my legs feel amazing, and even through my hellish run, my knees gave me hardly any grief. (I used the rolling pin before the run, to prevent any muscle stiffness, and it seemed to work.)

I also looked up exercises that will strengthen hips and knees in order to prevent pain and injury. Here's the video:

When all is said and done, I learned something about myself, and about the art of buying new running shoes. Now...to return them (don't be skeptical; they look fine, I cleaned them, there's no wear or tear, and the store said they'd take them back) and have my stride evaluated. That's on the menu for tomorrow. Hopefully I have better luck this time around.