Before I post my weekly report, I have exciting news! My sister is (unofficially) training with K and me for her first Half.

A little history on S. She's younger than I am and currently in grad school earning her degree in mental health counseling. In middle school and high school, she was a sprinter. She made it to states at a ridiculously young age. She enjoyed outracing the boys she was friends with. S has always been much more athletic than I am, and it shows in that she played softball and tennis besides running.

Sometime in high school, S got burnt out on running. But with grad school has come a new appreciation for physical and mental health, and she's gotten into yoga and the like. Now, it seems, she's rekindled her interest in running.

When I first began running, I used to wax eloquent about S's athletic prowess, but when she called me the other night for some running advice, I realized the tables have turned. You see, as a novice runner, I incorrectly assumed sprints and long distance running were similar. I may have even thought they were the same. (I am cackling at my ignorance!) But S pointed out that training for short, speedy, explosive races is so much different than training for long distances, and she wasn't sure how to proceed.

Apparently she's been watching K's and my schedule and matching it on her own.

Anyway, this makes me extremely happy. I love sharing running with people and convincing others to try it out. But it means even more to me that my own sister, who I so admire and hold in such esteem for her athleticism, is going to be joining me on this journey! Training together will motivate us both, but more importantly, I think it will strengthen our bond as sisters.

That said, here is this week's training: 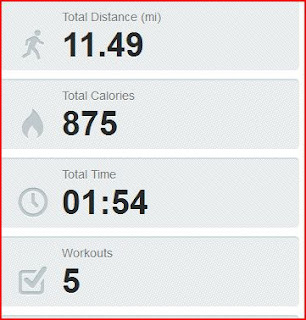 I'm very happy with this. I think 3 of the 5 runs were in the morning, and on Tuesday I ran twice. And to think it was such a struggle at first! To be sure, knowing I'm meeting someone else is very motivating; it holds me accountable. Also, what with lesson planning, grading, cooking, etc...once you know there's no other option than 5am, it makes getting up a lot easier.

Today we upped our mileage to 3. I think the biggest challenge for me will be 3.5, because it's been a really long time since I've consistently run 3.5 milers, and I'm guessing that's going to be the first increase in mileage that mentally daunts me. I want to do strength training at the gym two days a week, because I know that avoiding knee injury is going to be huge for me.

Overall, I'm feeling extremely positive and happy about our training! I'm looking forward to the continued progress I'm confident we'll all make together.