If there were a list of things that a sore throat makes nearly-impossible, teaching would be my #1. Seriously. You really have to dig deep, keep the volume up, drink water, and pretend nothing's wrong.

It's kind of like running, in that way. Running with a sore throat sucks too, now that I think of it. All that air drying you out and exacerbating the situation...

Here's a bit of inspiration I borrowed from facebook. Definitely necessary to remember lately. 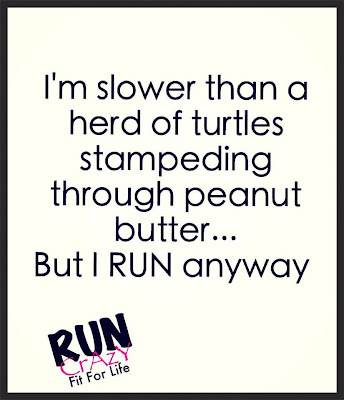 But if I'm going to talk about things that can make running rough, I need to add a little pick-me-up, too. Very little is better than a run that should be par-for-the-course but turns into one of those Good runs you've been needing. It's been a long time since I've had a Good run, and tonight was one of those.

It really took me by surprise. I've been feeling sniffly and groggy, but thought if I put on my running clothes I might be motivated. I took the opportunity to try my new Pro Compression Marathon Socks; I figured I was only going to do two miles, so if I hated them I could just suffer through it. Turns out I shouldn't have doubted. My legs felt unstoppable! The socks are thin and so comfy.


I did an old loop, then added some of the main road, and caught that the lights were on at the park across the street. I veered off course to run through some of those paths. I love when the lights are on in the park! Plus I had my MACE with me, so I was feeling brave out there alone.

I've found lately that new paths are a must for me. Part of my burnout must have been boredom. On top of that, I like having the freedom to make my paths as I go. Evening runs allow for that more than morning runs because I'm not as strapped for time and it feels a little safer because there are more people around.

This run was meant to be just two miles with a 4-minute warmup, but when I hit two miles I just felt too good to stop completely. So I added another half mile at a slower pace. The run became a tempo run, which was awesome because I love tempo runs! My splits were 10:14 (including the warmup), 9:20, then 10:30 at the end. I kept the majority of the run in the 9:20s overall, and had negative splits. Plus, the warmup and my exercises took care of any pain I may have had. Pain-free tonight! I'm elated! And I'm definitely anxious to see how this speed translates into a 5k, because I definitely felt tired at the end from pushing it.

I am going to browse ProCompression to see if they have more socks on sale. I got their calf sleeves (which are still on sale!) and love those, and the marathon socks I wore tonight were simply amazing! Now...off to roll out my legs and settle in for an evening of grading.

PS: Today is the last day to receive 40% the ProCompression site! Just add promo code JJ40!
PPS: I'm going to be marshaling at the Hooters Half I decided not to run. So excited to volunteer on the course, but I hope I don't misdirect traffic and cause problems. I've never had that much responsibility before.
Posted by Ali K.