Back in the Saddle

My cough 90% gone, I decided to bite the bullet and finally go for a run today. I have been three weeks off running, and was really itching to get back out there.

A few factors didn't cooperate, most notably my lungs. I'm still congested and coughing up phlegm, so I wasn't surprised to struggle in that regard. I was planning to do two miles, but then the rain set in. I purposely chose a route close to home so I could easily return if my body wimped out.
I fully expected to be a wreck today, given that three weeks off can really set a runner back, and had accepted that this run might not be great. But I completed it in 9:48, and ran more than half of it between 8:50 and 9:07. (Given the short distance, that's not so impressive, but I'm feeling oddly proud about it.)

In the end, I was out of breath, rained-on, and exuberant.
There was something beautiful about running in the rain. I felt cleansed of some of my hang ups and excuses that have been weighing me down this month. And when I plugged the run into Nike+, I knew I'd made the right decision when I saw this: 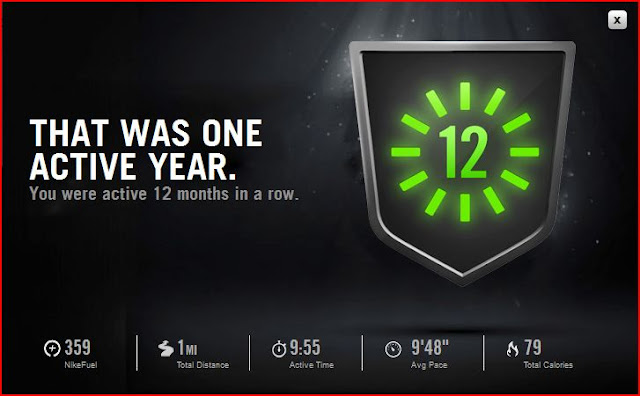 If I had allowed May to slip through my fingers completely, I would have missed my goal of "no blank months" this year.

I have a long journey ahead, even to start building up to a solid 4 miles, but I've been there before and I'll get there again. Today, I'm feeling positive.

How would you describe the feeling of a first run back after a break?