There's seriously nothing like a week's vacation and a five hour plane ride to make you appreciate coming home!

Matt and I are back safely from our trip to Los Angeles. After sleeping in way too late today, we're trying to get back into the usual grind. Today's post isn't about running or marathon training or prepping for back-to-school stuff. Today's post is about pictures.

Lots and lots of pictures.

When I last wrote, we had enjoyed two days of California sight-seeing. So let's pick up where we left off!

Point Dume is a beautiful national reserve outside of LA. You may recognize the cliffs from the Iron Man movies; Tony Stark's house is superimposed on them! We hiked up to the top for a beautiful view, then hiked down to the beach to enjoy the crashing of the waves and watch the surfers.

Beaches in California are rocky and chilly; not at all the Florida beaches I'm used to! It's pretty cool that so many of the beaches require a little mountain climbing to see them.

After leaving Point Dume, we headed to a winery in Malibu and enjoyed a wine tasting. We each got a different flight and took detailed notes of which wines we liked. It was a great way to unwind after scaling those cliffs.
One of Matt's groomsmen and his fiancee were in LA from Florida as well (small world!), so we headed over to Griffith Park to see them. It was getting dark, but we were able to hike up for some blurry pictures of the Hollywood sign. We also got to spend some time at the Griffith Observatory.

But wait, day three wasn't yet over! Some of our good friends from college had moved to LA a couple years ago, so we stopped by the Sunny Spot in Venice to have a couple drinks and catch up.

Remember how I mentioned that Matt really likes to go-go-go on vacation? Well, I was able to win a battle for once. We headed down to San Diego to check out of the zoo.

If you were keeping up with Instagram, you know I embarrassed myself in public by doing lunges throughout the zoo. We enjoyed the honor of seeing three of the 14 Giant Pandas in captivity in the US...we also saw red pandas, which I am in love with.

I'm actually really torn about zoos in general; I think animals should be left in their wild habitats. Throughout the day my mood fluctuated between giddy and melancholy. But still, I'm glad we were able to go.

After the zoo, we opted to skip the Gaslamp District because ComiCon was going on and we didn't want to be trapped by the masses. Instead, we went to La Jolla to see the seals and eat dinner.

I was surprised by how cold California is in July. Not exactly what I'm used to.

We pretty much spent Sunday doing nothing. We had brunch at Manhattan Beach at a place called The Kettle, which was amazing. We walked the pier and checked out the aquarium, which was terrifying. After a day of wandering, we picked up food to cook at home with Mark and Shane. It was a nice, lowkey day.
Day 6: Museum of Natural History and the Angels Game

Our plan for day 6 was originally to rent a car, go for a run, travel to Santa Barbara, and see the Angels play the Twins. However, it took us over an hour to get our car. Dejected, I agreed to put off the run. Instead, we went to Rodeo Drive and the Museum of Natural History.

I will never stop being amazed by the sheer size of dinosaurs. The LA MNH has a nice array of original fossils and casts. I was in heaven. I miss learning things!
We met Scott and Robby-with-a-Y at the Angels game. We sat in the nosebleed section. It was interesting to be at a game and to really not care about the outcome. Matt actually ran into another Rays fan there! It was pretty nice to be in an outdoor stadium.

Finally, on our last day in LA, we were able to take our rental car and drive along the Pacific Coast Highway. The views were simply gorgeous. We stopped in Leo Carillo, a spot our friend Alan insisted we see. I'm so glad we did! The views from the cliffs were phenomenal. I couldn't resist climbing some of the rock faces.
We cruised our way up to Santa Barbara and enjoyed a beautiful run along the boardwalk. It was sunny but windy; I must say, California is perfect for runners. Even when it's warm out, the breeze off the water is downright chilly.

(The downside is that is rarely rains out there, so running in the rain is basically impossible.)

We stopped along the run to check out the beach below us. After rinsing in the frigid beach showers, we checked out the courthouse gardens. We drove through the historic area, then headed back to LA. 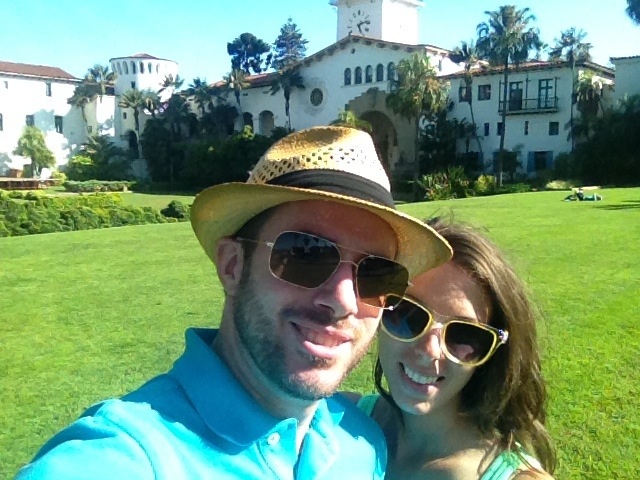 Matt and I both agreed that if we ever moved to California, Santa Barbara (or somewhere like it) would be our destination of choice.

We had dinner in Santa Monica. On Tuesdays, the food trucks in the area park on Main Street. We enjoyed the atmosphere while eating dinner in the grass.
Scott, Robby, Scott's roommate Leighanne, and her boyfriend Gareth met us at the food trucks and we drove over to the Standard, a rooftop bar in LA. Alan and Doug met us out again, and we enjoyed the perfect weather and gorgeous views.

As we left the Standard, a lovely stranger offered us homemade cake! Turns out she's the blogger behind Sitting in Bars with Cake. Her experiment - to bring cake to bars to meet men - is hilarious and tasty! She was super friendly and the cake was a divine way to end the night. (I'm hoping we get a little shout-out on her post for cake #22!)

We drove through WeHo but were too late to enjoy the drag show at Rage. Instead, we headed home. It was a good way to end our trip.

I can see why so many people love Cali! If we go again, we need to see San Fransisco, Yosemite, and a few other places Alan mentioned for white water rafting and the like. We had a great time...But I am 100% happy to be home!

When was your last big vacation?
What have you been up to while I've been away?
Link me to a blog post you wrote while I was gone that I really shouldn't miss!