I got to run yesterday! Hallelujah!
When you've had to take some time off, no matter the reason, it's important to consider a few things before you start running again.

1. The reason you took time off. Were you injured or sick? Were you just swamped with work or travel? You may need to ease back in with extra caution if you were down for the count due to injury or illness.

2. How long was your sabbatical? Most studies suggest you don't really start to lose fitness until about two weeks off from exercise. Depending on how long you've taken off, you may need to consider starting at a much lower level of training than you're used to...maybe even reverting to using intervals as you build up your fitness again.

3. How intense was your rest? If you were able to cross-train during your time off, you'll be more likely to jump back into running without much fitness lost.

My reason: I took the time because Cipro (the antibiotic I was on) has a tendency to lead to tendon rupture, especially in the Achilles. So I wasn't injured, but I was working the prevention angle. Toward the end of the Cipro course, I came down with a cold, but luckily it was gone by this Friday, and I was done with my pills by Thursday.
My time off: I was right at that critical two weeks off when I finally felt safe to try running again. I took the recommended 10 days off when I began the Cipro on Monday, but I hadn't run that Sunday, so my days off automatically went to 11. Then, because I wanted to play it safe, I took a couple extra days...so really my time off was about 13 days.

My rest-intensity: I was forbidden from doing any rigorous activity, so other than walking around my classroom, I was on full rest.
Other considerations: I knew the weather had gotten markedly warmer in the last two weeks, and I was a little worried about my asthma after having a cold.

Decision time: I decided to go out for just one mile, without marking my pace. I chose to run on the park "track", so I'd only be a quarter mile from my car if disaster struck.

The reality: After a mile, I paused and checked in with myself. My legs felt good; I hadn't any pain in my ankles or knees, but my hips felt a little tight. Mostly, though I just felt exhilarated! I continued for another mile, picking up the pace a bit, and finished feeling I could do more...but wanting to give myself a day to see if any pain or tenderness set in overnight. 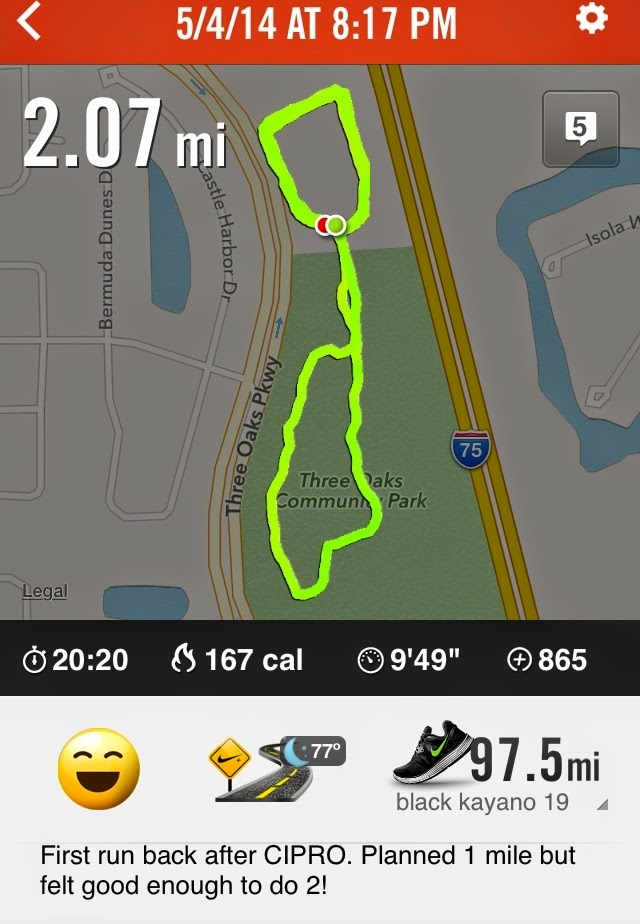 I am so happy to be running again! I need to be careful this week and avoid getting overzealous, but it's just so nice to be running again! I missed it more than I realized! Now it's time to (slowly) get back on track with my cross-training and weekly mileage so I'm primed and ready when marathon training begins!

What do you take into consideration after time off?
How good does that first run back feel?! AMAZING!