I have no idea how to start this recap. Part of the problem is that it all still feels like a dream. I guess the easiest way to shake that feeling is to start with the beginning!

Matt and I made the drive to Cape Canaveral and went straight to the race expo. I had been having waves of anxiety on and off in the car, but getting to the expo seemed to push my mind into a state of denial for the purpose of self-preservation. (That feeling lasted all night and until about mile 9 of the race the next morning.)

At the expo, I picked up my bib and shirt and met Bart Yasso. A few runners from the Sub30 Club were running the half (or had just driven in to cheer, which was beyond nice!) , and we all met up for pictures and dinner. 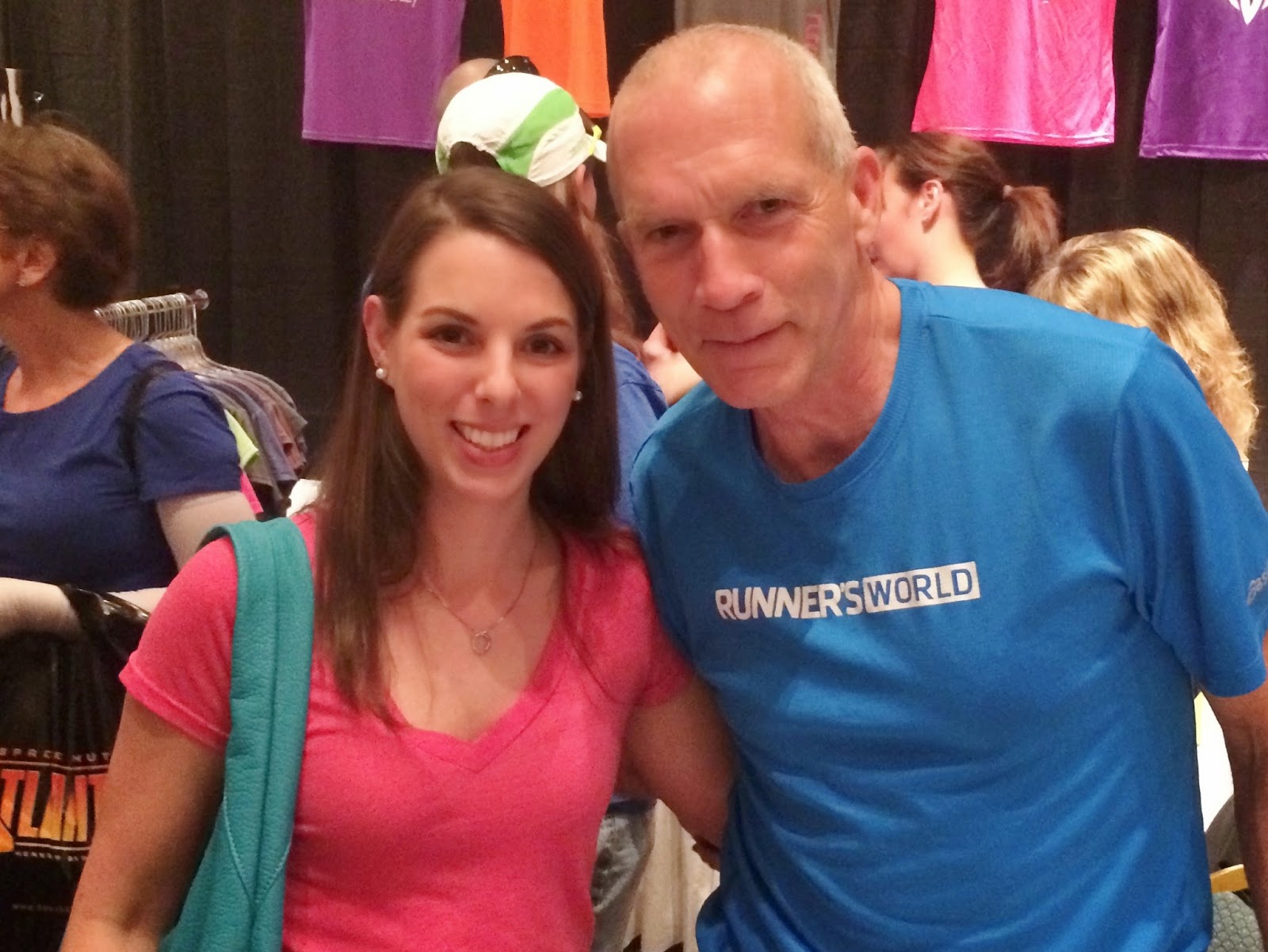 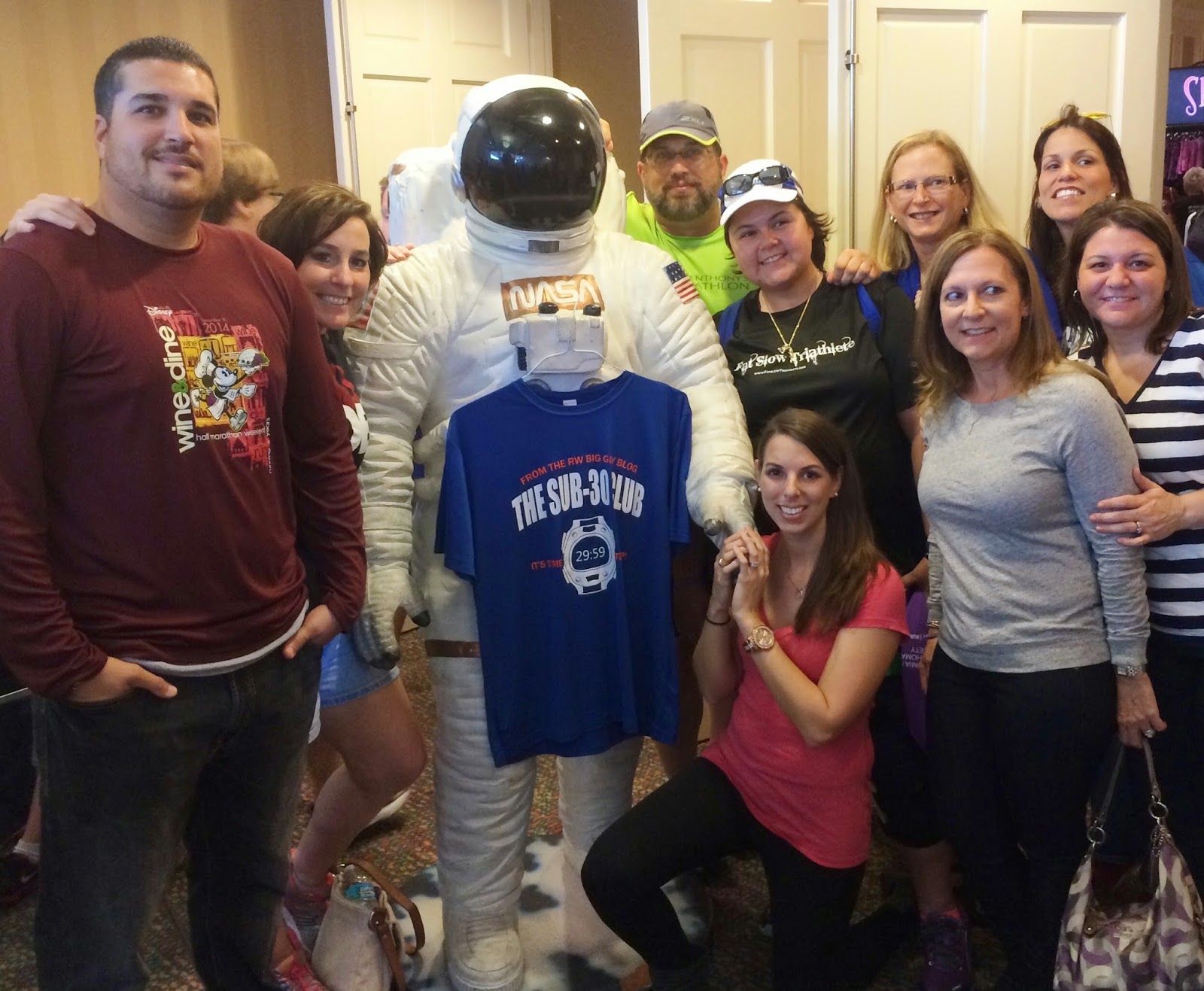 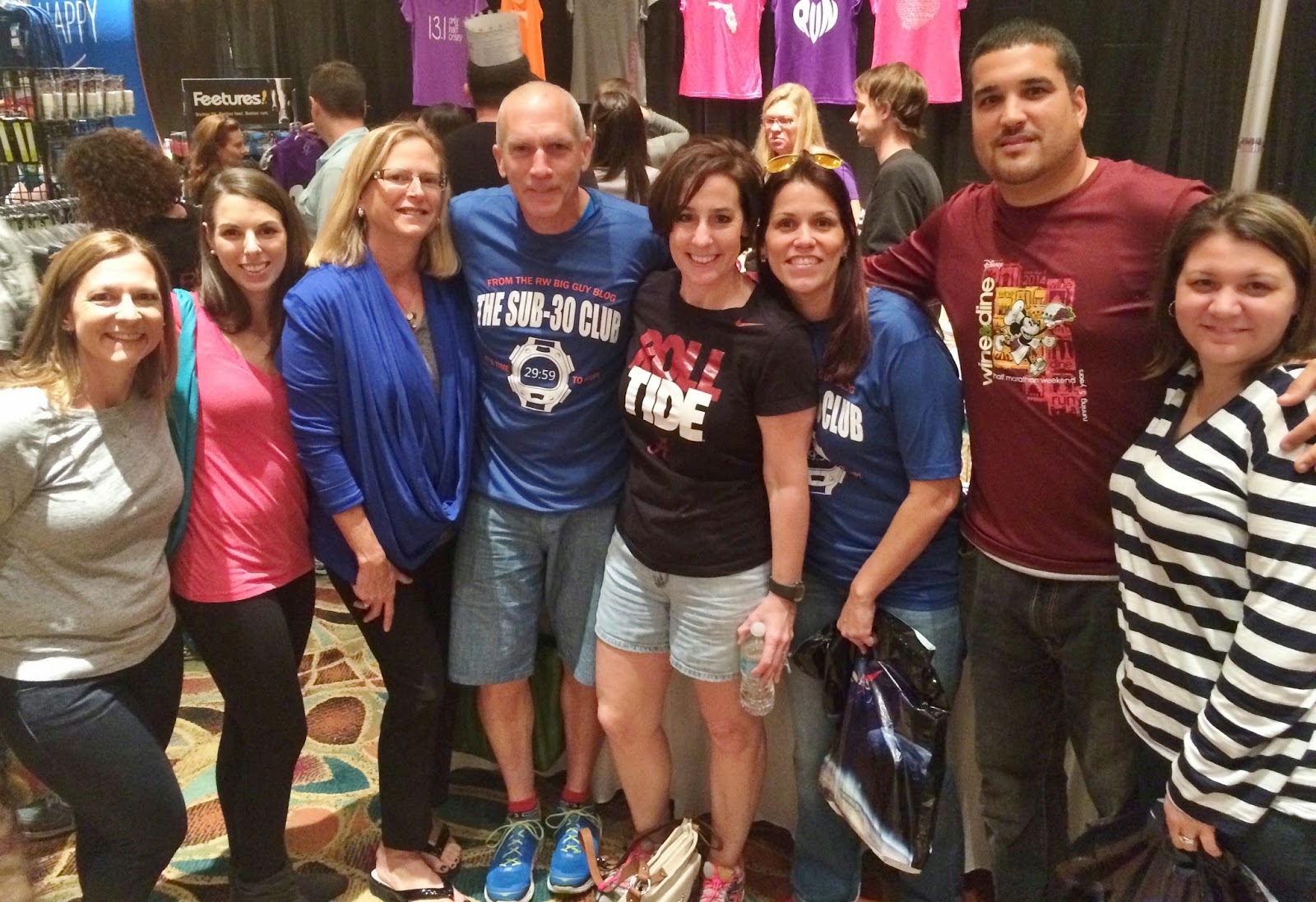 I spent some time before bed watching the motivational videos friends had shared, and even though people had warned me I might not sleep, I slept very well.
Sunday

At 4am, I rolled out of bed and got dressed. Had breakfast. Went down to catch the 5am shuttle. At this point I felt nervous but no more than usual for a race. I just had that low-grade anxiety that comes along with lining up at the start.
Despite the shuttle running a touch late, I had plenty of time at Cocoa Village to use the bathroom and get warmed up. One complaint I have about the marathon is that there are no set corrals. There are signs with average paces and you line up near your desired section. It was ridiculously crowded and everyone starts at once, so there are no waves. 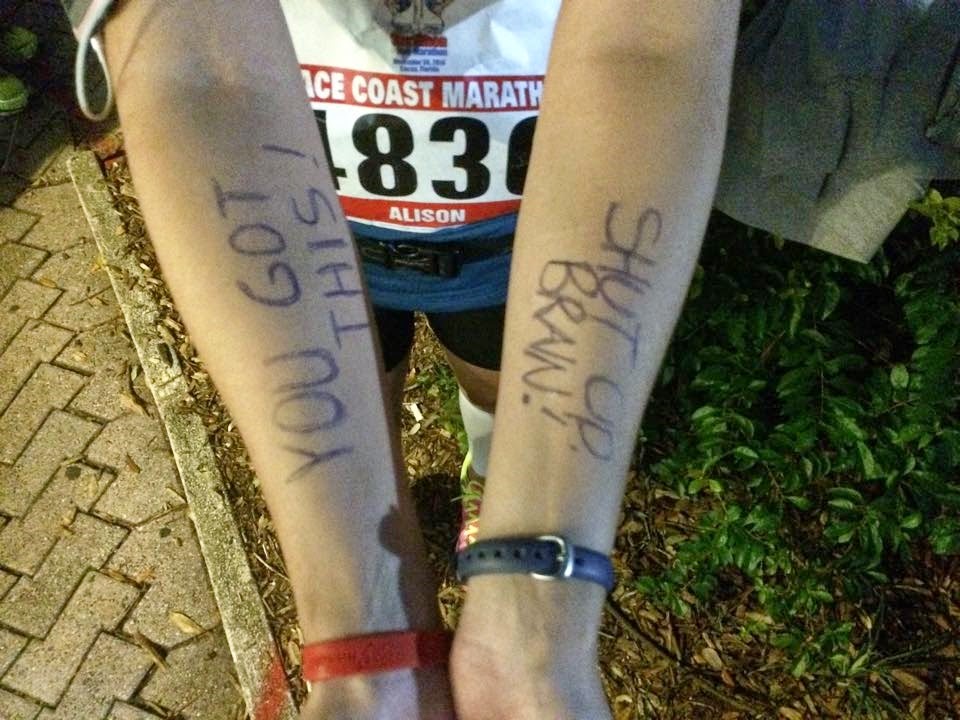 Anyway, I stripped down to my racing clothes and got in line just behind the 10:00 pace sign. Matt had taken the shuttle with me, and just as the countdown was getting ready to begin, my mom found us! I gave her a quick hug and then we were off! 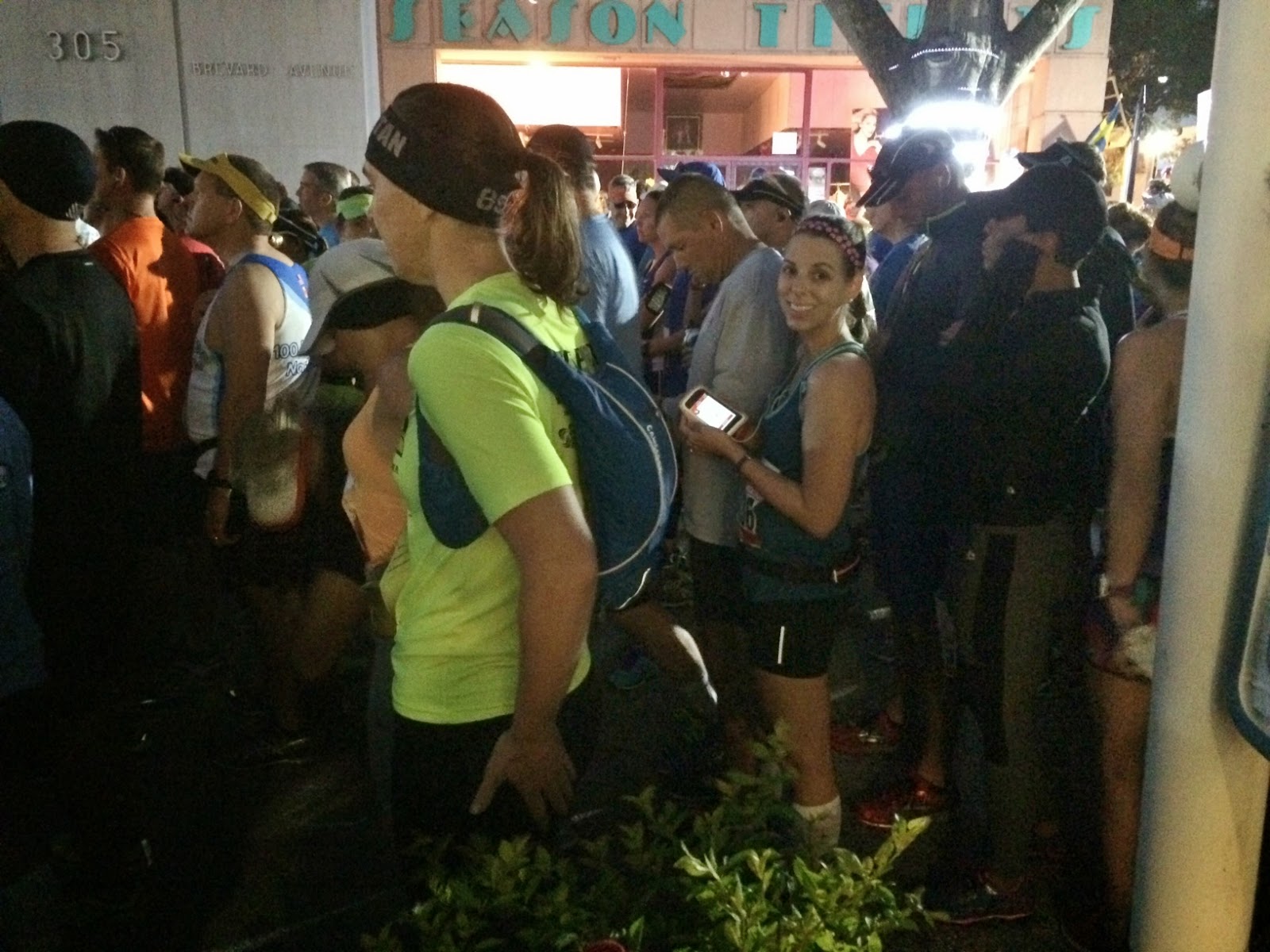 I was keeping my eye peeled for Adria, but didn't see her the entire race. However, Sean found me before mile 1 and we ran the first four or five together. The entire course was along the same road down Cocoa Beach, right on the water, and that was really amazing for the view and for spectating, but it was really narrow in some places! There were tons of pace groups, including Galloway pacers, and they took up a lot of space and I got stuck in their crowd at one point. (Again, staggered waves would have really benefited this race.) 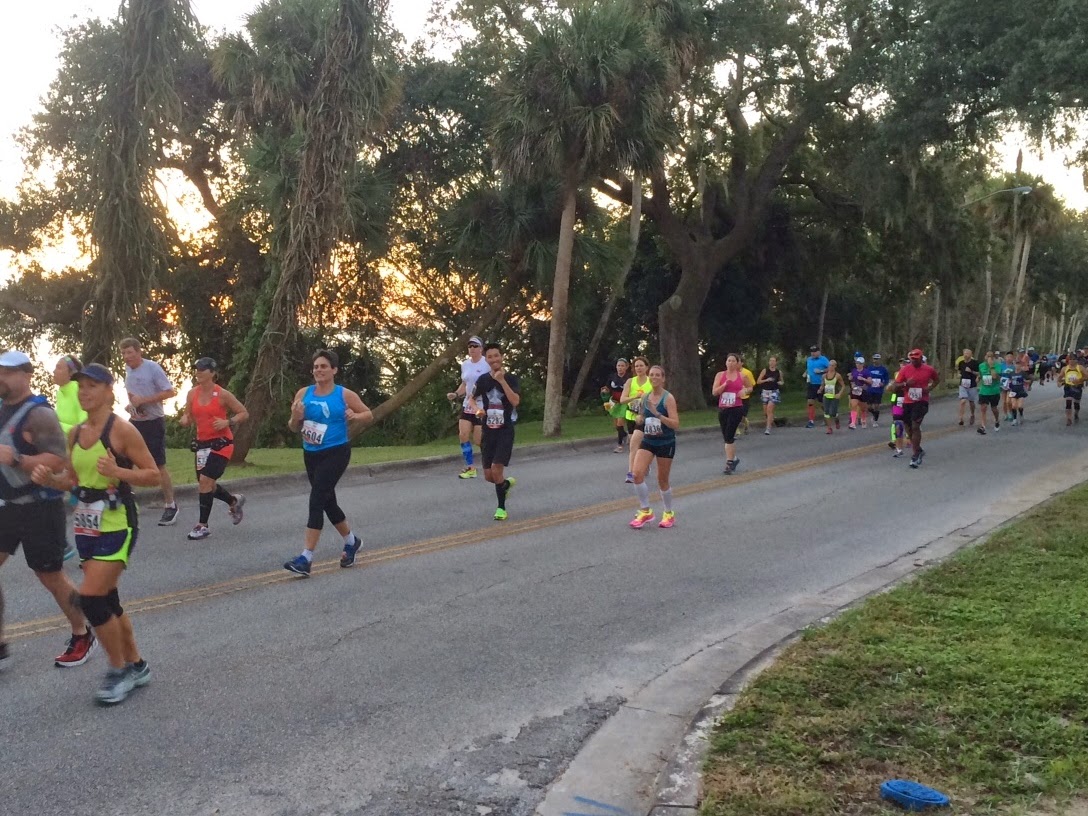 I felt the lingering effects of my cold early on. Luckily, Matt and my mom were able to get to multiple stops along the way to cheer me on, and at one point I told Matt to have my inhaler ready for me at the next stop. I was having trouble catching my breath, and I knew before the halfway point that I would have to ease my pace considerably. My A-goal was out the window; but I was at peace with not being able to control certain elements (like the weather, which was much warmer than planned).
Around mile 11 I saw Kristin and her daughter Claire for the first time. They had a few different signs along the course, including  RUN LIKE THERE ARE DEMENTORS CHASING YOU and COMPARED TO 8TH GRADERS, THIS IS CAKE. (Or something along those lines.)

The halfway-point brought us through Cocoa Village again, where the spectators were the heaviest. I heard my name a few times as people read my bib. Some of the good signs I saw said: GO RANDOM STRANGER; I'VE BEEN TRAINING FOR MONTHS TO HOLD THIS SIGN/YOU THINK YOU'RE TIRED? I'VE BEEN HOLDING THIS SIGN FOR HOURS;YOU RUN BETTER THAN CONGRESS; TOUCH HERE FOR A POWER BOOST; and... 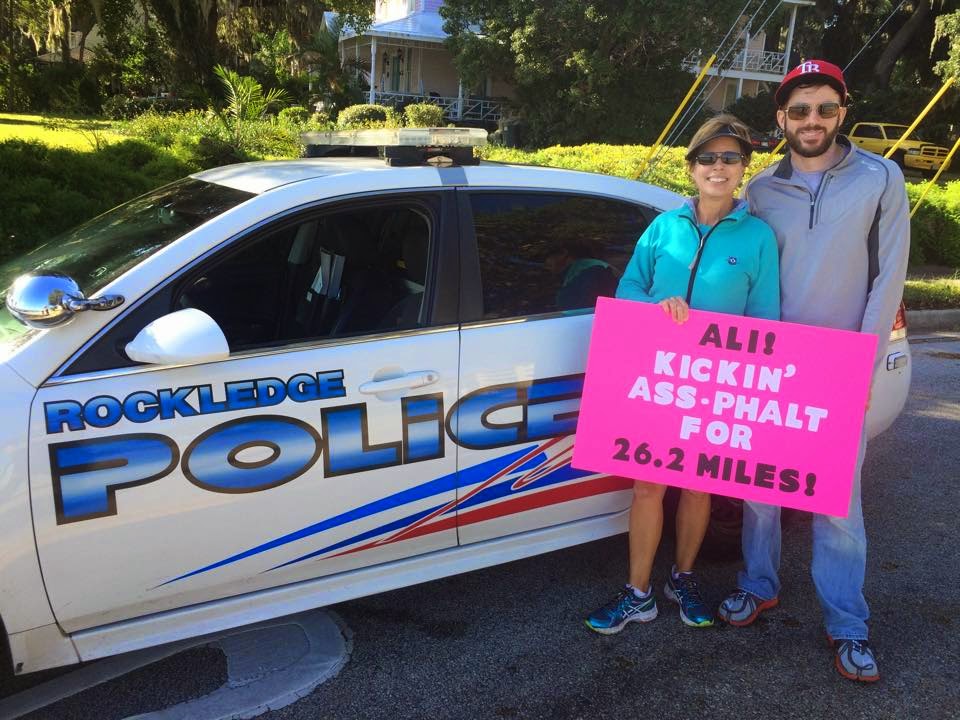 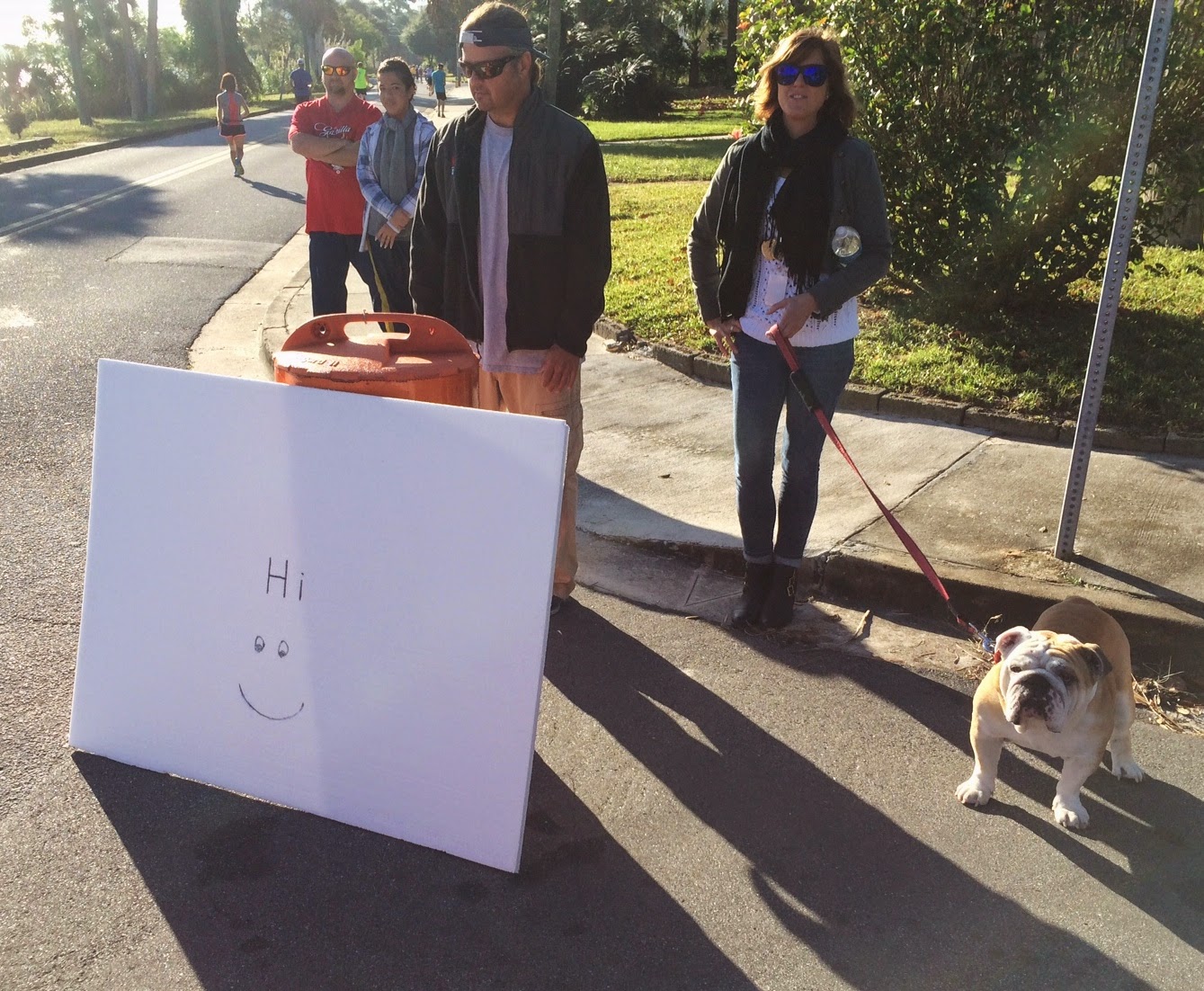 Some people set up alcoholic drink stops in their yards along the way, too, and their signs were pretty hilarious and colorful. (Think along the lines of DON'T TRUST A FART, etc.)

I kept moving until about mile 16. At that point, my calves were cramping and seizing really badly and I needed to pause to stretch. I texted Matt that I wanted half a banana, which I ate the next time I saw him around mile 18.
I don't know if it was mental or not, but the banana seemed to really help. My calves still hurt, but not nearly as badly. At that point I just told myself, you have 8 miles to go, and the faster you do this, the faster it's over. You can do 8 miles. I buckled down and just kept moving forward.

(Sean told me later he passed me on the turnaround at this point but I was totally in the zone and didn't see him.) 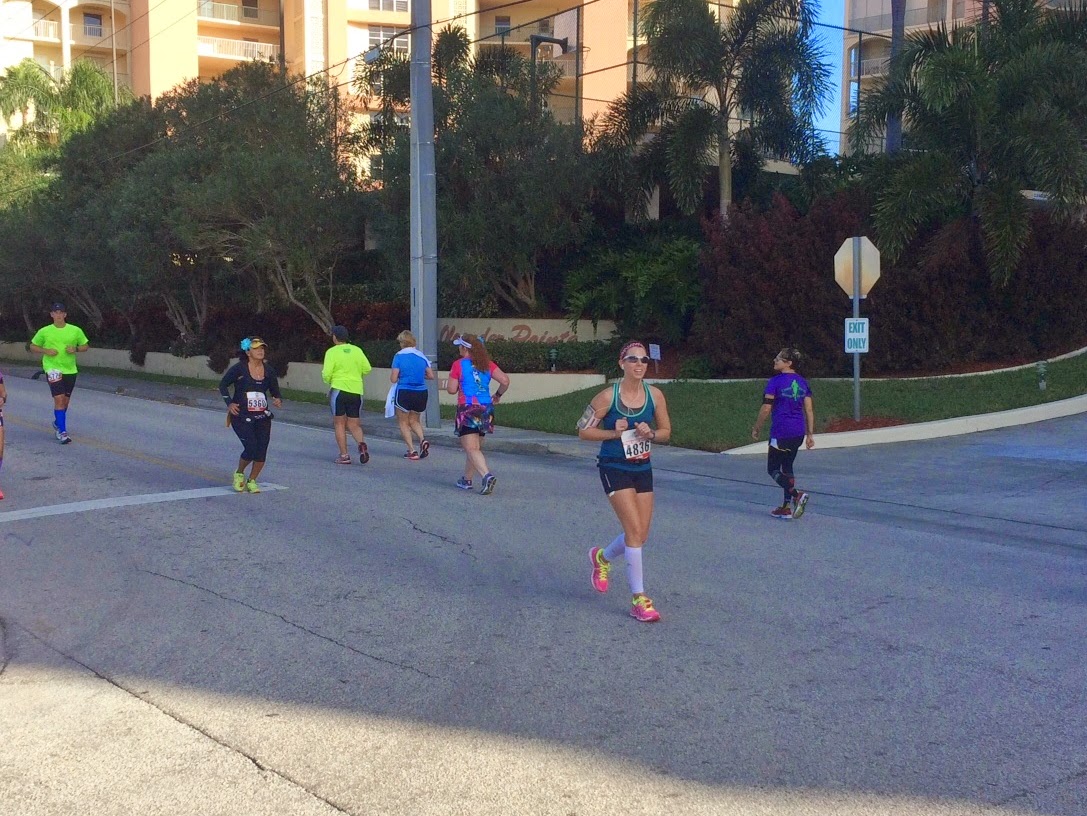 The stretch from mile 19 to 21 didn't allow for many spectators, but I was feeling okay. Somehow after mile 20 I just felt sure I'd finish. But it was good that I saw Matt, mom, and Kristin again at mile 22. Kristin jogged alongside me briefly, then Matt took over and he ran with me - in jeans, no less - until the next mile marker. At that point I felt the tears threatening. I tried to explain to him how hard it was to breathe and how mentally exhausted I was, but I couldn't quite explain it. At this point I was stopping every half mile or so to stretch my calves, but I realized I had a really horrendous pain in the top of my foot (where I got injured last year), and stopping made it hurt more. So at mile 23 I thanked Matt but told him I needed to finish this myself.
I spent the last three miles biting the inside of my cheek and my fingers to take my mind off the pain in my foot. Walking hurt more than running so I "ran" at a ridiculously slow pace. I stopped myself from crying multiple times. I had never had to push through so much pain, but I knew if I caved in and cried even a little, I wouldn't be able to hold it together and finish, and there was no way I wasn't going to do this. So I gritted my teeth and dug in.

Magically, around mile 25, I broke through that dark tunnel of doubt and pain. I felt an almost physical pull in my gut. Like...people tell you to dig deep and I had literally never felt what that was like before this, but it's just as much physical as mental. It really is. I also saw Laura (one of the Subbers) at this point and that gave me another great boost.

I saw the mile 26 marker and just PUSHED. The last quarter mile was around a cobblestone "track" and when the volunteers told me "just around the corner!" I knew they meant it. 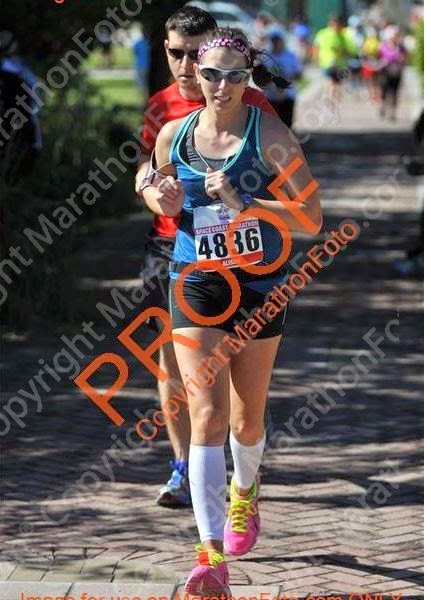 I heard my name being called by hundreds of strangers as I rounded the last corner. I barely held back the tears until I crossed. The first person I saw was Kristin, and I immediately started sobbing as I said, "I can't believe I did it!" (Luckily she had tissues because I'd used all mine on the course.)
For awhile I just sat and recovered. We took some photos. We found Sean. I texted Adria to see how she had done, then we drove to her dad's so I could shower, as we had planned. 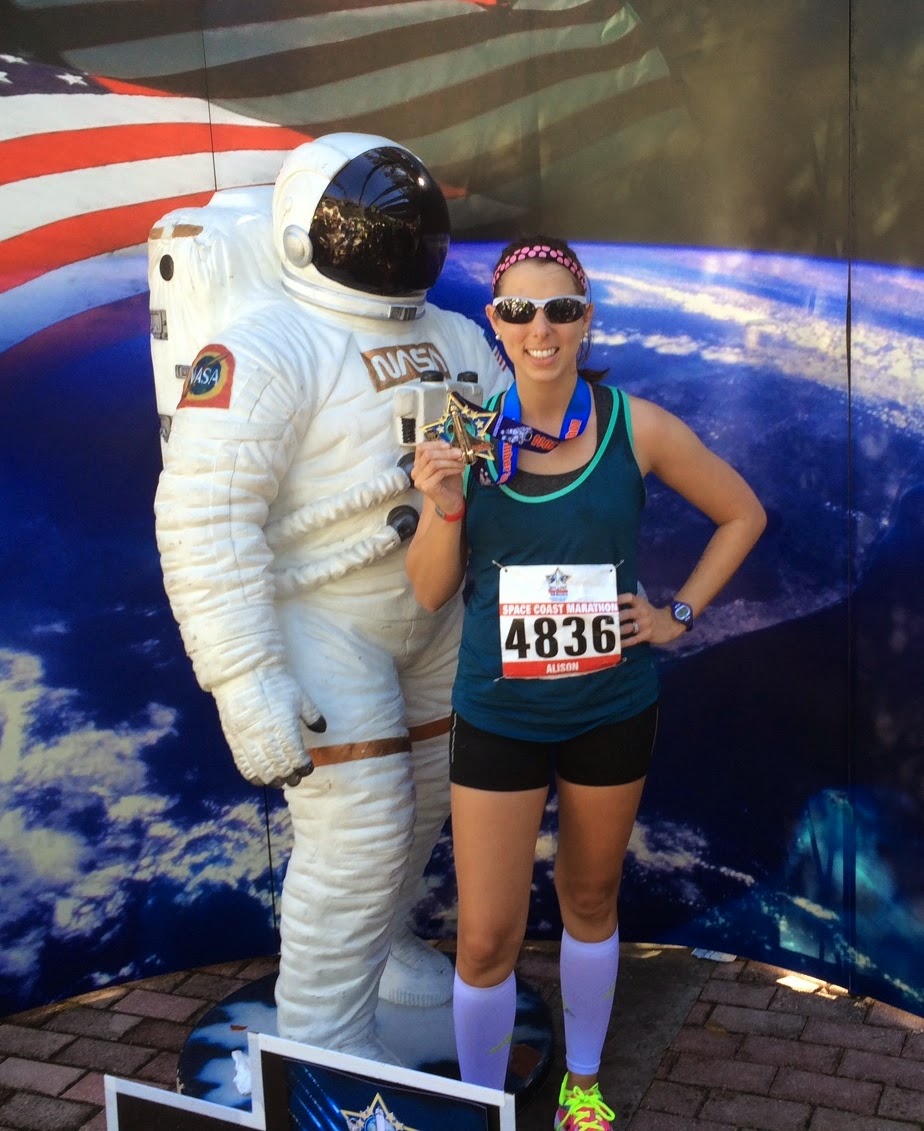 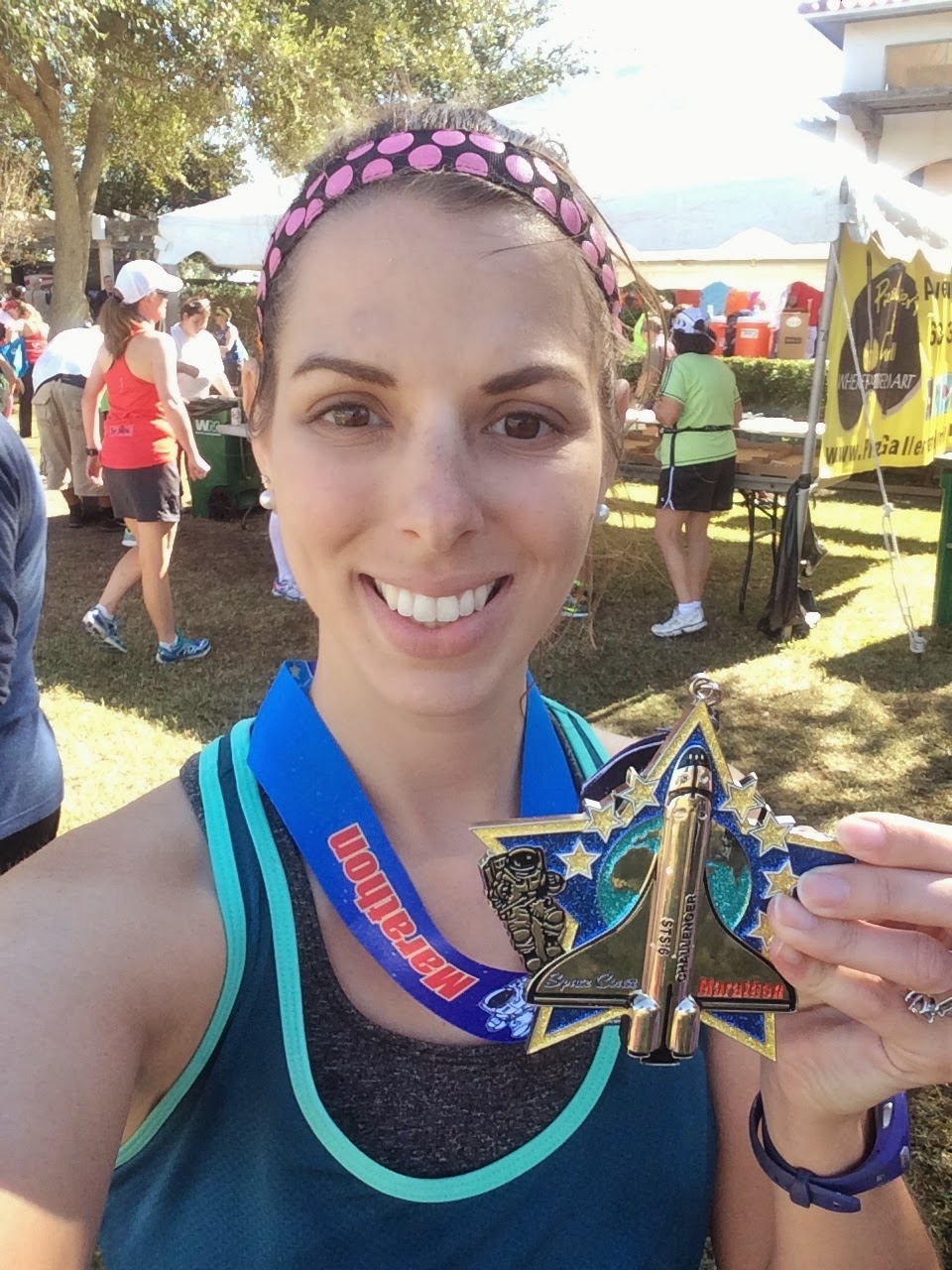 I spent the next few hours on the car ride home trying to put down my thoughts, but everything still felt totally dreamlike and deflated. I think this was a symptom of post-race blues...I spent seven months training for this and now suddenly it was over. But I'm not sad or down today. In fact, I feel wonderful! I'm in total awe. I've accomplished something I literally never thought I'd be able to. I will never doubt myself as a runner again.

I've tried to breakdown some of my main thoughts here: 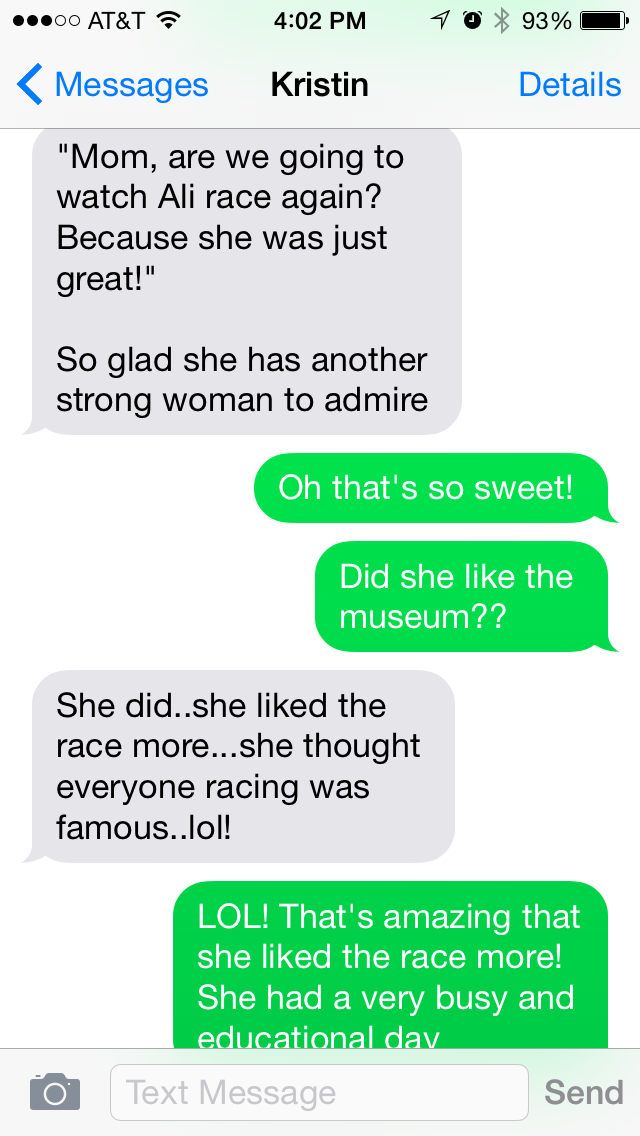 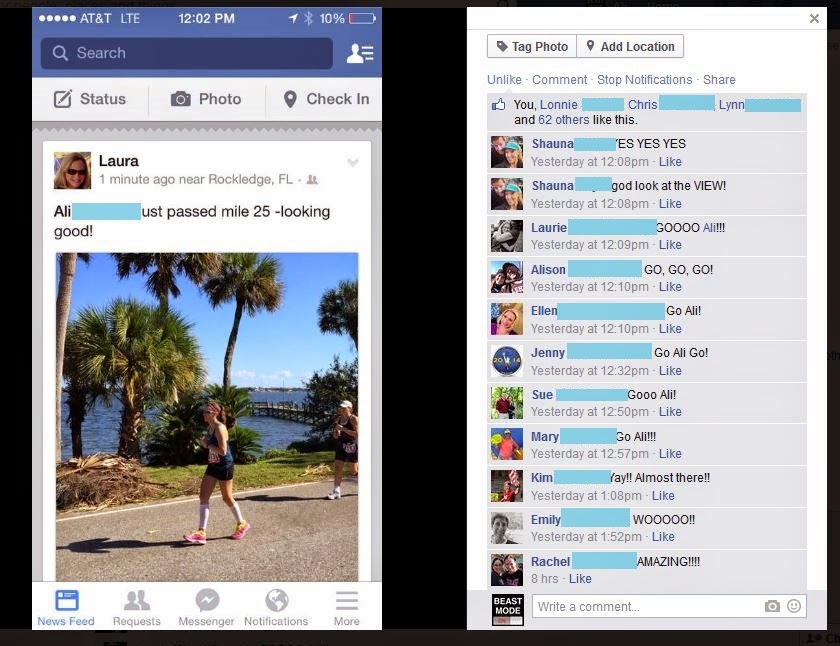 I am...thrilled. Just thrilled. And now that I've reflected, maybe it will all really start to sink in. I am a marathoner.