A1A Half Marathon - My Birthday Weekend

I originally wanted to recap my birthday weekend separately from the race stuff because a post about both threatens to be really freaking long...but everything is kind of intertwined so one mega-post it is!

When I first signed up for the A1A Half Marathon, Matt and I were excited to spend the weekend with Oden, who lives in Ft. Lauderdale; this was made even better when we learned Rob would be in town from Atlanta and was going to join us! Then we convinced Mark and Shane to drive down and the next thing you know, birthday/race weekend became a mini-college reunion!

Friday
Rob, Matt and I arrived at Oden's and we went out for dinner. I had a fantastic burger with red onion jam and smoked Gouda with a flourless chocolate cake for dessert. I was all about indulging this weekend.
Saturday
Matt and I went to the expo Saturday morning and met up with Chris from Sub30. (She wasn't running the race but drove over just to say hi at the expo and offer some moral support!) The expo was really nice - large and spread out, not too crowded, and full of free snacks and goodies! We bumped into Meg while there and she and I confirmed that we'd meet at the finish line on race day. 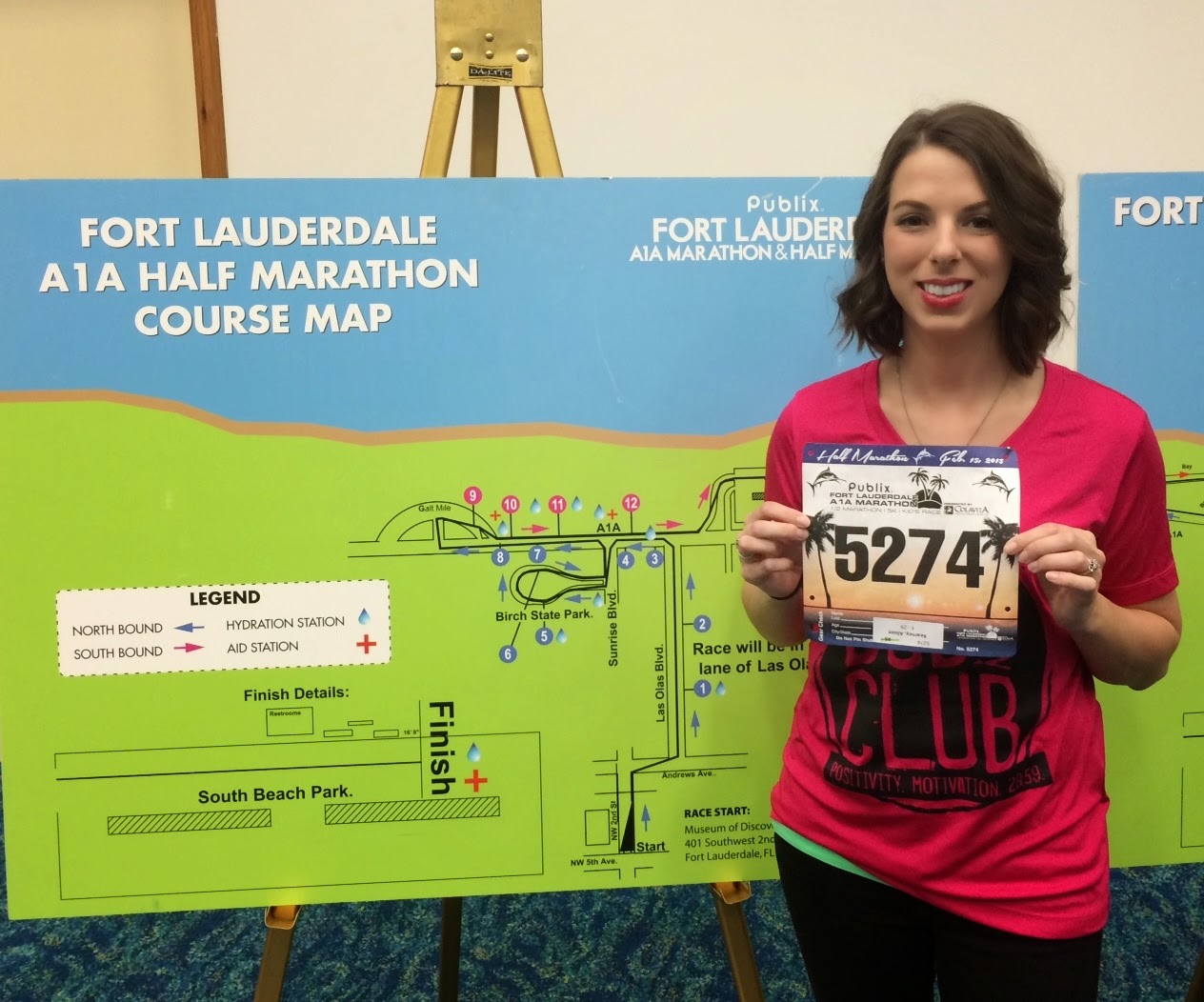 After the expo, Matt and I went back to Oden's and we all went out for lunch at Blaze Pizza. Their gluten free crust was very good and I was impressed with their commitment to avoiding cross-contamination.
From lunch we headed to the movies. We saw Kingsman: The Secret Service, which I had no idea was originally a comic book. Halfway through the movie I was thinking the plot was getting campier and campier; I won't spoil it, but I will say that if you like over-the-top ridiculous action movies and don't mind some gore, I highly recommend it.

Although it was out of character for me to go out the night before a race, it was too soon after lunch to have dinner and go to bed, so we spent some time of the Funky Buddha playing giant Jenga.
Our night ended with PDQ for dinner (complete with free milkshakes) and some last-minute planning for race morning.

Sunday
I was up at 3:50 feeling well-rested and anxious. Oden's condo is very close to the starting line, but after some debate Matt and I decided to drive rather than walk. We arrived just after 5am. My biggest complaint about this race was the start; there weren't enough porta-potties and the starting chute seemed extremely narrow and packed.

While I was in line for the toilets, Matt ran into Sean, who gave him these really nifty hand-warmers for me to use, and then he ran back to the car to get the sunglasses I had left there. By the time he got back we were in the last couple minutes pre-race. I had the worst nerves I have ever had for a race. I don't know why...maybe my lingering cold or my lack of real training lately? But I was literally shaking as I prepared to start.
I put on some mellow, enjoyable music and committed to running easy. I lined up near the 11-minute mile corral and ended up crossing the start line about five minutes after the gun.

At first, my legs felt a little cold and achy, but I was determined to enjoy myself and take in the atmosphere. It did take awhile to feel good, but around mile 1.5 I saw Meg ahead of me and then I felt better; just knowing I had a buddy on the course wearing our matching shirts really helped. Around mile 2.5, we ran up the drawbridge on Las Olas. People stopped to take selfies of the view and the burgeoning sunrise. Stretching my stride to eat up the bridge, I finally felt warm.
From that moment on, I had a smile on my face. In fact, I choked up multiple times in the first half of the race as I realized that 1) my legs cramps were totally gone (my theory about Mucinex seems spot-on); 2) I felt downright good; 3) this was my first half of 2015! And then, around mile 5, I remembered it was my birthday!

Yes, in the anxiety and excitement of the race morning, I totally forgot that it was my birthday.

We ran down the beach and into a park. Everything seemed beautiful and perfect. I took off my "arm sleeves". I thanked volunteers. I ate my Gu. I began to push my pace as I realized my lungs and legs were holding up well.
Around mile 8 I saw Sean and, not far behind him, Meg. At mile 10, I couldn't believe how quickly the race was passing by and how painless it all seemed. I pushed a little harder.
Around mile 12 my Nike+ began to malfunction, but I caught it in time to avoid having to stop/restart it like I did for Space Coast.

Then I was near the finish; I could hear shouts of, "Happy birthday!" and there on the sidelines were Matt, Oden, and Rob...and my sister! Steph had planned to come for the race but I wasn't sure if she'd make it. It was the perfect surprise! 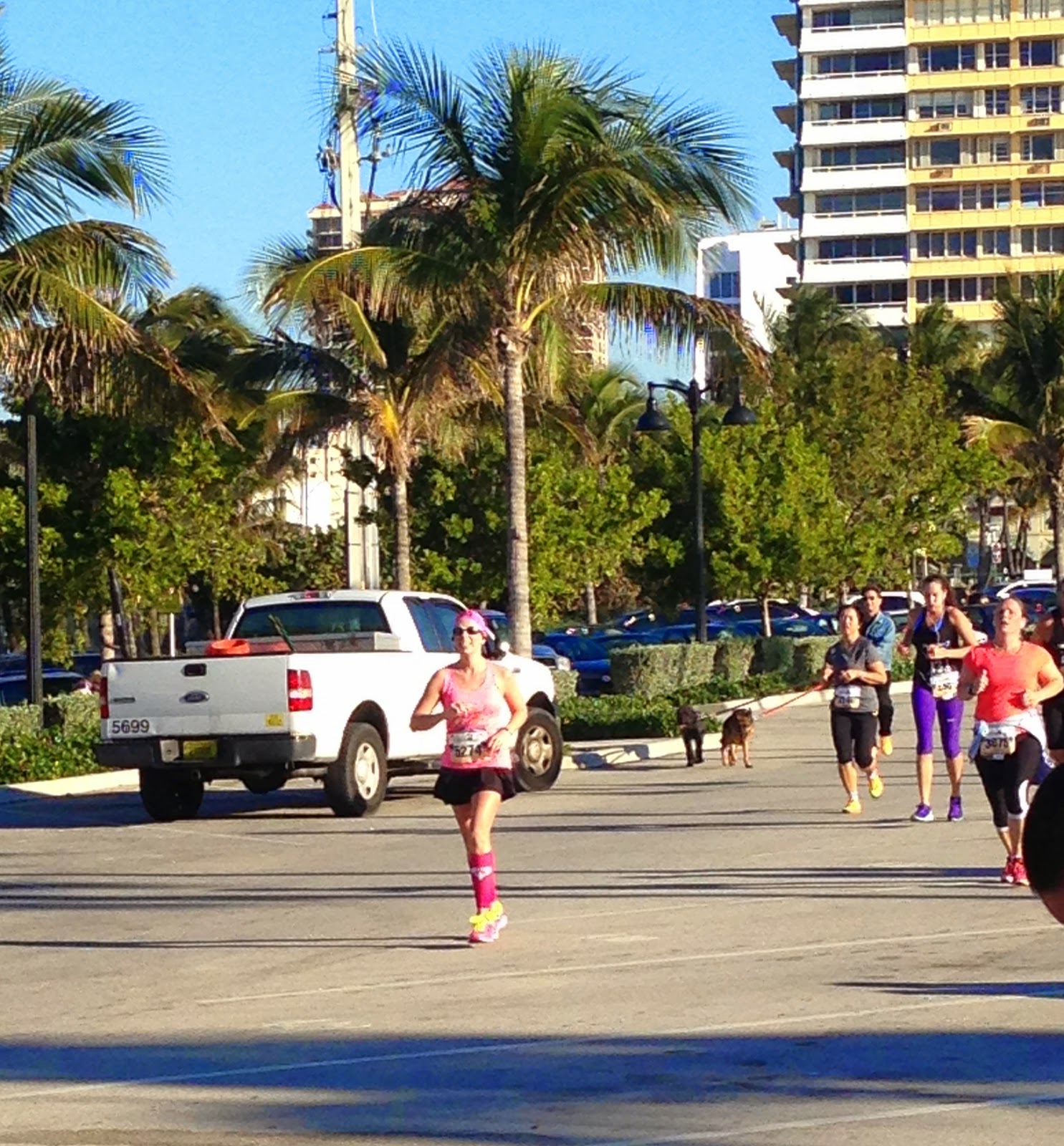 The finishing chute was ridiculously crowded; there were booths set up to hand out free swag, but it just seemed like a terrible place to put everything. I escaped as quickly as I could to meet my cheersquad and take photos.
Kristina and I had been in touch throughout the weekend and we were able to meet up at the HOF sign just as planned! It was really nice to meet her in person. We're not all that far from each other; hopefully we can run another race together someday! 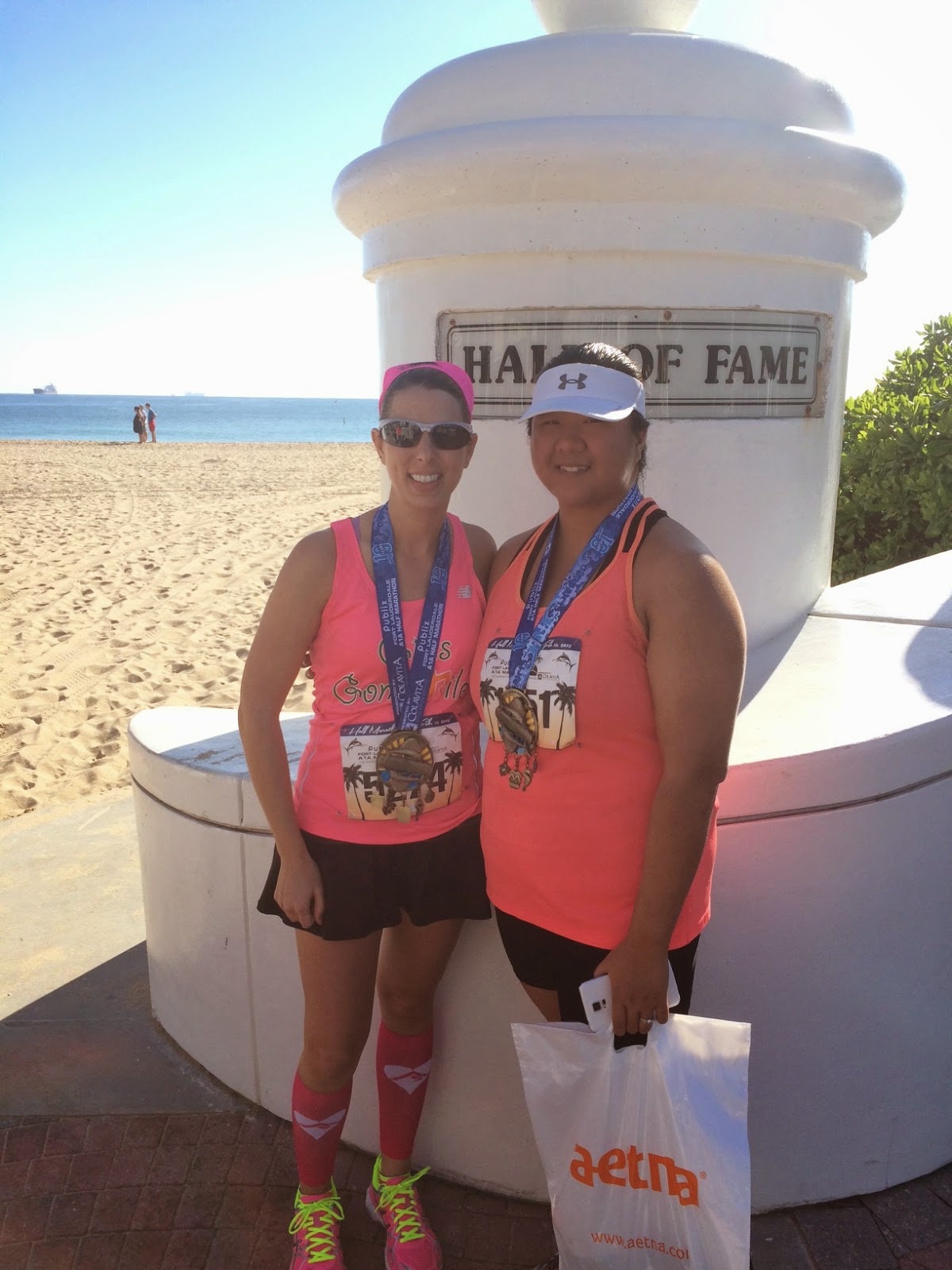 After a shower, we walked to Las Olas for food...so yes, my actual distance today was around 15 miles. Post-race food was brunch at Rocco's Tacos before our drive home. 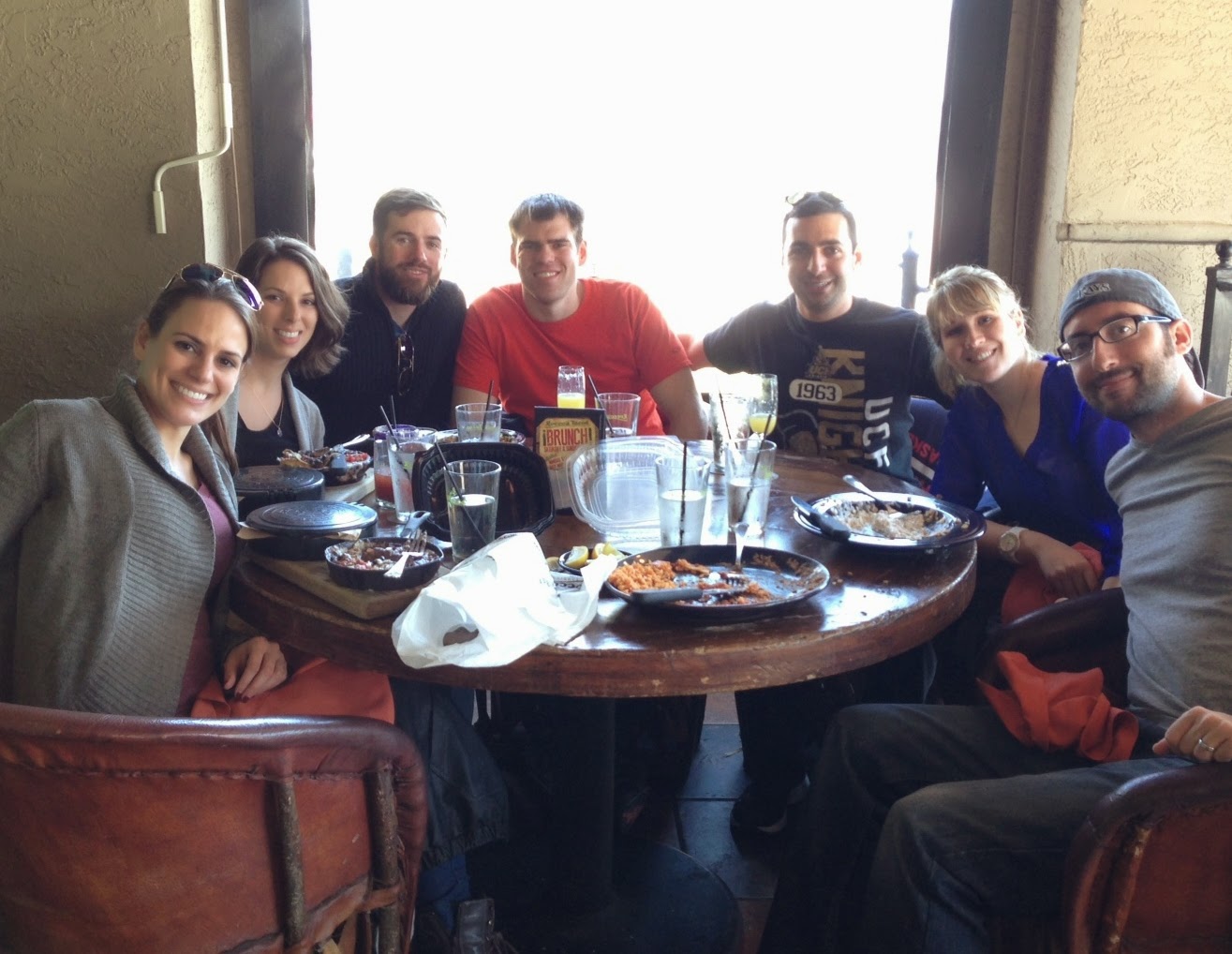 I cannot tell you all how relieved I was after the race. Last time I ran a half while sick, it was 90 degrees out and I was so dehydrated. That was a really rough experience. Considering I haven't been running long at all since the full, and I've been sick for two weeks, I was expecting a repeat performance...I'm so glad I was able to race well and genuinely enjoy myself the entire time.

Thanks to cool weather and an adjustment in how I was treating my cold, I was able to run a race I felt really proud of! This half is actually my third-fastest time, and I wasn't even aiming to be competitive today. Honestly, the race felt almost easy...If I had been healthier, I would have decided to go for a PR. (My lungs just weren't up to it yet.) I never hit the wall or struggled at all. I just ran.

I loved everything about it - the course, the weather, the location...I will definitely plan to be back!

Last year I ran a half for my birthday and PR'd. This year I ran one and proved to myself that I am, finally, a seasoned runner. I think I like this half-on-my-birthday tradition!
ABK
Posted by Ali K.