After Tuesday's run sent me into panic-mode, I was excited but also nervous to run Friday. I was really hoping all those mystery pains were just a fluke.

I started with some dynamic warmups and stretches. Then, I began my run at a slow, easy pace. I had a random mix of music playing, and I just concentrated on letting myself warm up. It was chilly and had just finished raining, so the weather was comfortable and clear. I felt good.
A couple times, I did notice a...blip...in my ankle, but I quickly realized that what was causing it was a kind of "flopping" of my foot; as long as I maintained form, I felt great! So great, in fact, that my "30 minute test run" became five miles and included the bridge. I just didn't want it to end!

I finished feeling like I had showed taper who's boss! 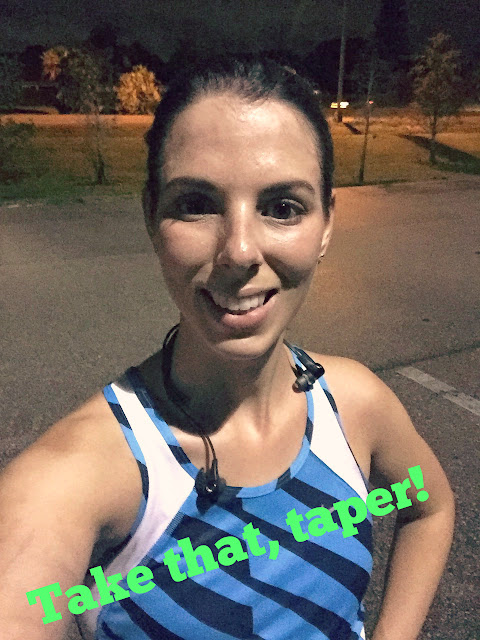 Music of the Night came on toward the end of my run, and I began composing an essay in my head about the symbolism of the Phantom vs. Raoul. I mean really, the entire thing is about innocent, "pure", childlike love versus lust. Which probably isn't news to anyone who's a fan of the musical. Anyway, my thesis was that Christine chose the wrong man at the end, because choosing Raoul shows us that she's stunted due to her father's death and has never fully matured into an adult woman.

But, choosing the Phantom alone would have been all about lust and fulfilling fantasy and desire, without any solid emotional foundations, which would have doomed the relationship. So really, she should have just chosen both and had some brother-husband style polygamy going on. Right?

Taper is literally making me crazy, guys.
Am I the only one who mentally writes literary essays while running?

Sunday I ran the second 10 miles of Kristin's first 20-miler for my last long run. I changed how I had tied my new shoes so they had a firmer grip on my heels, and it worked like a charm; I didn't have any pain, and it was so rewarding to be there for her through that milestone!
We celebrated with breakfast at Skillets. Usually I go for the gluten free waffle, but I really wanted to try an omelet this time...which was fine, because Kristin's husband shared some of his waffle with me, so I had the best of both worlds!
After breakfast, Matt and I drove to Cape Coral to check out the race route and parking situation. It's going to be pretty tricky for spectators to meet me on different parts of the course, but we have a week to figure it out so that hopefully I can at least see people a couple times on each loop.
This week, I'm planning two easy, shorter runs. I talked to Megan a little bit about what I should plan this week, and I've decided that three days of rest sounds good, especially because I'll still be up on my feet all week teaching.

(We also have two volleyball games, but that means we only have one practice, which will be easier on my legs and feet since I'm allowed to sit during games if I want, even though I rarely do.)

I'm so excited! I feel like training for my second marathon is finished and was successful! I didn't get injured or sick (fingers crossed...I have 7 days to go)! With that accomplishment under my belt, I feel pretty good about race day! Even if it doesn't go as planned, completing training itself is a pretty big deal.

Speaking of plans...I've already set my pace goals, but here are my other goals, broken down:

And of course, finish upright and uninjured, and preferably at a run!

Does your mind go to weird places while you run?
How was your weather this weekend? We've had tons of clouds, wind, and rain, but it's still fairly warm. I've resigned myself to a warm race, and I'm hoping I'll be able to power through.