Elizabeth's original goal, once she started running with me more frequently, was to run 10 miles. Then, she learned her brother had once run a half, so then her goal became 13.1. But she actually wants to run longer than her brother, so she's revised the goal to 15...because 14 isn't good enough. 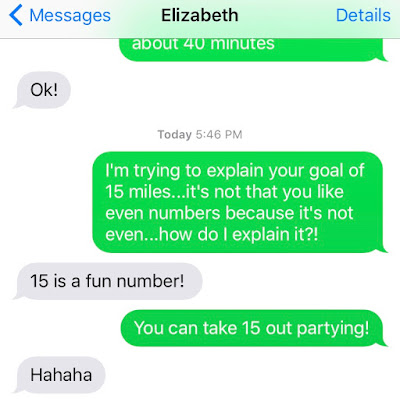 She'd like to run fifteen miles...just because. (I'm still trying to convince her to run a race with me.) I tried to explain to her that running such a long distance without a reason is crazy.

But then I went out and ran twenty miles today and I haven't really decided if I have a reason, so who am I to talk?

This week, after suffering some ankle, shin, and quad cramps last week, I only did two weekday runs and I kept them shorter. The weather has been gorgeous - cold and dry (when it's not storming...I mean, maybe not dry, but not humid!) - so my paces have been picking up, but this week felt like a rest week. I knew I had a possible 20-miler on my schedule, but I literally played it by ear until I woke up Sunday morning and realized I was going to really do it.
This was new for me. For all my previous very-long-runs, I mentally prepared all week. Training builds me up to the distance so that I'm flirting with the idea of 20 for ages before it happens. Not this time; this time, I barely thought about my weekend run until Montana made it to town Saturday evening and sealed the deal.

I had to actually breakout cold-weather gear for this run: gloves, capris, long sleeves to layer, and a hat. For the first ten miles, all that was absolutely perfect. I ditched my top layer after that point and was able to take off my gloves and hat by mile 15. I was sure it was in the 70s by the end, but it was only 52! Funny how our bodies warm up and play tricks on us.
Anyway, the run went well. Montana and I kept a steady pace (we aimed for 12:15 but both felt comfortable in the 11s) for the first half and only took brief walk breaks to fuel. I actually didn't eat or drink anything in the first eight miles. I tried UCAN for the first time this morning and it worked very well; I had steady energy the entire run and never felt like my hunger got out of control or distracting.
I also fueled with Glukos blocks and gels this time around because Gu has been giving me heartburn. I liked the results!
At mile 10, Montana traded places with Elizabeth. She and I continued on. At mile 11 or so, Kristin came out to greet us, but despite being dressed to run, she bowed out. Too cold!
We had to pause at mile 15 for a bathroom break; I didn't stop my GPS so that mile's split is an outlier, but at least it's honest. At this point, I was developing a pain in my left arch/outer foot. I decided to press on because we'd already turned around and there was nowhere to go but back to the car anyway.
Around 16 we began taking short walk breaks every .75 or so. My foot was killing me and my hips weren't happy either. Maybe I jumped up to 20 too quickly, but now I'm tapering - or something - so I have time to let it all heal.
Of course, no long run is complete without a fantastic breakfast. Montana and I went to Skillets afterward; I had chocolate milk, coffee, a GF chocolate-chip and blueberry waffle, cheesy eggs, and bacon. 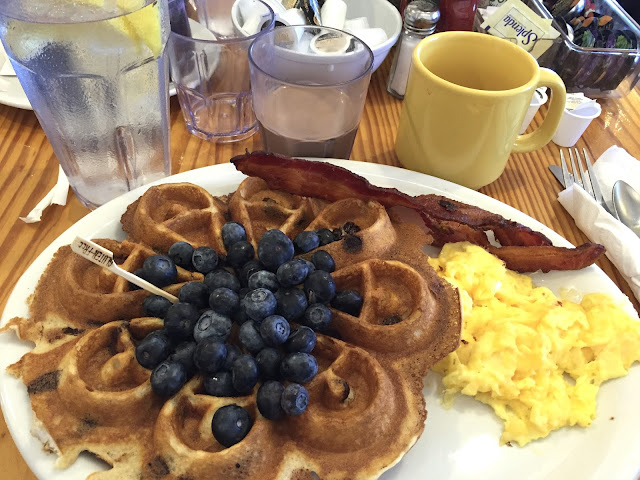 Now that I've done another 20 (which, if I'm being honest, I had my doubts that I would actually do), I can make a better decision about A1A; the choice won't be made for me by lack of training, anyway. So now I'm tapering for a marathon, or I'm continuing training for a half. For me, that boils down to six-of-one, half-dozen-of-the-other.

My mind is there for a marathon, and my body feels like it can do it, although there was pain today, but I'm not sure if my heart is there yet. Part of me is scared. I don't want a repeat of BDR. Part of me just realizes that marathons hurt and I'm not sure how badly I want to go through that again so soon.

There's no rush to decide, but now that this long run is done, I have a feeling I'll be thinking it over. A lot.

Any tips for treating soft tissue pain on the outside of my foot? It feels bruised and hurts to walk.
Do you need to mentally prep for long runs?
When you're not training for something, do you still run long-long (not just long)?