Run for the Paws 5k

It's been awhile since I've raced a 5k; it's been even longer since I truly trained for one. I signed up for this race months ago when I made the decision to focus on short distances and speed. 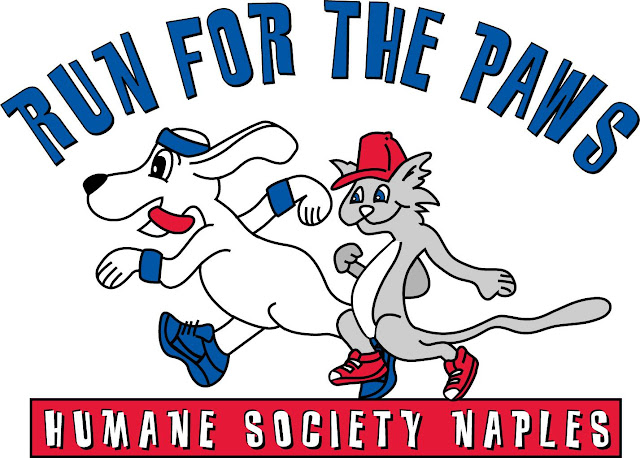 I was a little nervous getting ready this morning. Since running 20 last weekend, my left foot has been a nuisance. It doesn't hurt when I stand on it, but lifting it hurts. The pain is on the soft, outside part. Anyway, I didn't run all week, and my foot was feeling mostly better during the day, but every evening after being on my feet all day at work, it would start to ache again.

I decided that if my foot really bothered me during the race, I'd give up on running the full in February so that I could truly rest it.

I originally went in with no goals because of the pain, but was secretly hoping that I'd be able to break 30, which is always my fallback goal.
Matt and I got to the race about 45 minutes before it began, which was more than enough time to pick up our bibs, use the bathroom, and walk to the start line. I have to say, I'd forgotten how low-stress 5ks are! No fueling to worry about, no need to carry a million things. I knew that even if it hurt, it would be over quickly, and that was a great feeling.
The race began at 8am, which I originally thought would be too late, but ended up being perfect because we've still got winter weather here! After a pretty unorganized lineup and very little warning for the countdown, we were off!

I took off pretty quickly in the first mile, and .25 in I realized I was pushing a 9:06 pace. I back off marginally; I felt good, but I didn't want to burn out. My foot was uncomfortable but not painful. In a way, it felt like I was stretching the tender spot, which felt nice.

The course was a simple out-and-back around the airport grounds. Around 1.5 miles in, I started to see the leaders coming back. I was impressed to see my pace staying steadily in the 9:30s; I didn't feel like I was really pushing it much, but I didn't know how hard I could really go without burning out, so I stayed there.
The 9:30s ended up being comfortable and just challenging enough; I could have probably done the last mile in the low 9s, but because I'm out of practice with 5ks, I didn't want to take the risk. Considering I've been in the 10s and 11s for awhile now, I was really pleased with my performance.

The volunteers were really great. We've had a lot of rain and flooding, and they made sure to point us toward the dry parts of the paths when necessary.

The finish snuck up on me. I finally pushed the pace and passed a girl I'd been watching the entire race with a quarter mile to go, but still didn't really dig in for a sprint until the last tenth or so. 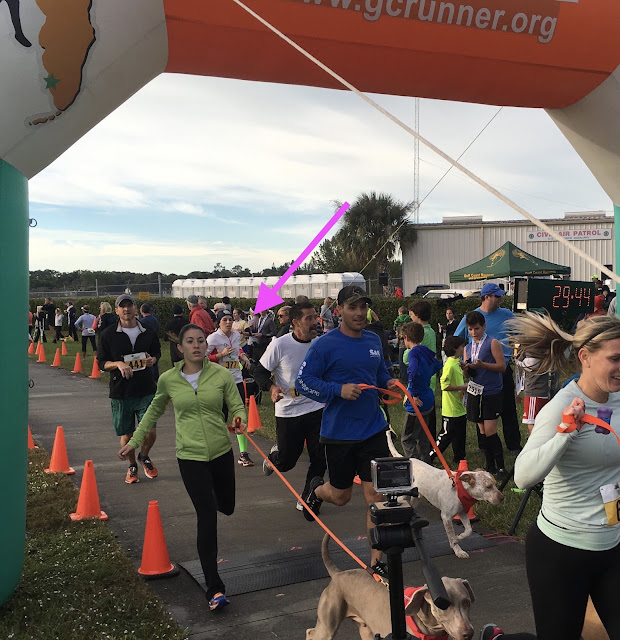 Matt had finished ahead of me in 25:37 (his chip got messed up and at first clocked him at 30:11, but we got it fixed) and met me at the finish. My time was 29:37. I was really pleased to have felt strong and consistent the entire race and to finish in under 30.
Because this was a 10-year anniversary race, they had finishers medals! I used to be a little bit of a snob about medals for 5ks, but I've gotten over it; in fact, one reason I chose this race was because of the promise of bling!
I'm happy I ran it, and I reminded me how much I do love shorter races! I'm excited to do more this year; this one will serve as a baseline for the rest. 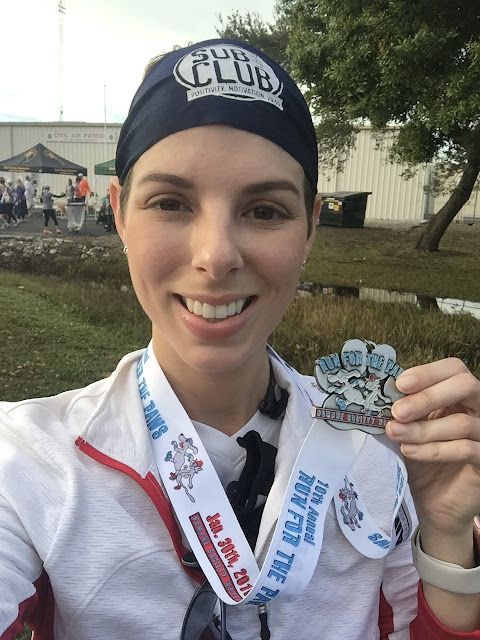 Finally, depending on how my foot feels, I'll be continuing a normal taper for A1A (15 miles this Sunday and 8-10 next Sunday). Fingers crossed. I'd like to have the choice - I don't want an injury to make the decision for me.

PS: As of Sunday morning, I've skipped that 15-miler. My foot feels almost normal; I think a couple extra days rest is called for, and then maybe it'll be totally normal this week!

When's the last time you ran a 5k?
Do like races that allow dogs?