There is, honestly, nothing better than being there to watch a friend accomplish something totally amazing. To watch them overcome obstacles, stretch their limits, and realize their true abilities.

Okay, maybe there is something better...feeling like you had a hand in helping them to get to that life-changing moment is pretty freaking great.

Kristin's first marathon left me feeling awed and inspired. I was moved to tears throughout the day and was so humbled and grateful to be a part of it. In a way I feel guilty that being there for Kristin's big day gave me so much joy because really, it's about her success and victory, but I couldn't help basking in the exhilaration of the day. Being there was simply one of the best experiences and memories of my running life!
Sunday morning, I kept waking up before my alarm. I was just so excited and ready to get to ESPN's Wide World of Sports (miles 17.5 and 19.3); I had been warned that traffic would be ridiculous and that GPS directions wouldn't work because of all the road closures. My hotel was only 10 minutes from WWS, but I gave myself two hours just in case.
Luckily, I had planned ahead. I had all my notes printed and marked so I knew exactly where to see Kristin. I got to WWS around 8am and listened to the DJ go through his spiel a few times. He had figured out how to recycle his material so he could be on the course for seven hours and never run out of things to talk about.

My favorite was: "How many first time marathoners do we have out here? How many last time marathoners?" (chuckle chuckle) "You say that now, but this time next year you'll be frantically hitting refresh on the Run Disney website, waiting to sign up."

Well, he's not wrong.
While I waited, I got to see some really inspirational things. There were cancer survivors and people running in honor of others; I saw a blind runner and his guide (both at mile 17 and at the finish line, which reduced me to tears); I saw people well into their 60s conquering the course. It's truly awesome to spectate a marathon of this size. You really do get an idea of how unique each and every story is; what brought those runners out to the start line, and what will bring them to the finish. Each story is inspiring, and I loved being there to witness it. 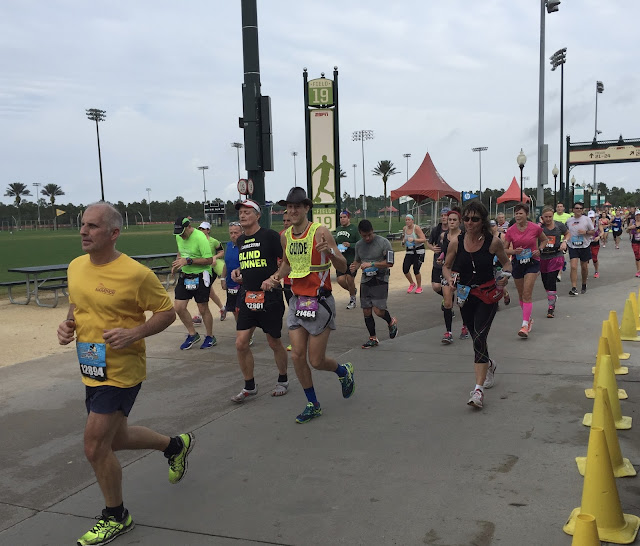 The weather was weird. Overcast and cool (around 70), but very humid (92%). When the sun peeked out, it was hot, but it actually felt really cold when it drifted behind the clouds. Basically, it was all the best of Florida weather wrapped up into a single day, and the overall effect was a kind of clammy, sweaty feeling.

Around 9am I made my way to our first meeting spot. I was terrified I would miss her and texted Kristin's husband a million times ("What if I'm late? What if I miss her here and at 19? I just saw the 5:30 pacer, am I too late?") like a lunatic. I honestly was so, so afraid to let her down. I knew she was counting on me.

Finally, I spotted her! I handed her a cup of ice and ran alongside her for a bit. At 17.5 miles in, she looked great! She was keeping a steady pace, but seemed to be tiring out a little bit. I reminded her that she was into single-digits - only 9 miles to go! - and that seemed to lift her spirits a little.
I left her and darted across the park, grinning like an idiot. I got to mile 19.3 (where I had parked) and waited at what I thought would be a good place to get some pictures. There were banners for the various weekend challenges, and a few runners stopped and I took photos for them. Not long after, I saw Kristin again. I wasn't able to get pictures after all because she didn't see me in time, so I just hopped back into the race and handed off her Glukos and gum.

At this point, she was struggling. She told me she understood what I had meant by the "dark" part of the race. I did my best to shake her out of it and encourage her. Tell your brain to shut up. Your body knows what to do and is ready for this. You can do seven more miles. At that point I had to leave her, but I knew she'd see Stephen again and then the finish line would be there!
Buses were going between WWS and Epcot (the finish line) every five minutes. I found the bus parking lot and got in line; ten minutes later I was on my way to the finish.

I speed-walked through Epcot, basically pushing people aside, because the buses were pretty far from the finish and I was on a mission. I refused to miss Kristin crossing that finish line.
I went through security check to see the finish line, then decided I was too far and wanted to be on the other side. The barricades were set up so people couldn't get near the actual finish chute, and the crowd was eight people deep. But I wasn't going to let my lack of height keep me down. I wove through the crowds and found a spot on the bleachers. I stood on them so I'd have a clear view of the finish line...and immediately knew why I'm unlikely to run a Disney race.

People were crossing the line in huge groups, walking, blocking each other, stopping to take photos...It was just a cluster.
I knew Kristin's approximate finishing time because I was tracking her on my phone, so I watched the  chute like a hawk. Ironically, it was those notifications that made me miss her actually crossing the line. The alert came and I looked down to check my phone, then looked up and immediately and blindly began snapping photos, hoping I'd catch her.

Luckily, I did. Kind of.
(She clarified later that the last timing mat was before the arch, which explains why so many people walked through the arch and didn't seem in a rush to get out of each other's way.)

I wound my way back out of the stands and found Kristin sitting on the ground surrounded by family, and I immediately dropped down for the best hug ever. I was grinning wildly, and I kept saying, "You did it!" and she kept saying, "I get it now, I get it."

And that's it, isn't it? You really can't get it until you do it.

We took some pictures and made our way to the resort buses. Kristin and I sat together on the incredibly smelly bus and rehashed the race a bit. Listening to her talk about her experience was so rewarding.
I hung out while Kristin cleaned up and then we had a huge, amazing lunch at the Wilderness Lodge (where she was staying) and Stephen dropped me back at my car so I could head home.
The highlight of the day may have been the conversation we had before lunch. Kristin, still reflecting on what she'd accomplished, said, "When you're around runners, you start to feel like everyone has run a marathon. And knowing that you had done it made me feel like it was the next logical step after running halves. So if you hadn't run a marathon, I never would have even thought about it."

To which I replied, "So you're blaming me?" and we laughed.

Then she said, "Not blaming. Crediting." And I can take that compliment and enjoy it, because it really did remind me that you don't have to be a particularly gifted runner to inspire others and help them reach for new goals - goals they may never have even considered otherwise.

And really, it felt so good to feel included in such a huge moment. I'm just overwhelmed with gratitude and joy. Kristin deserved to have a million people out on that course supporting her, and I feel so lucky that I was able to be there for her like she's always been there for me.

And now, she's enjoying a few days on a cruise with her family and hopefully basking in the glorious afterglow of finishing her first marathon. I'd say she deserves it!