So...last week I posted that I'd made the decision to only run the half at A1A. Despite solid training, my heart just wasn't in it.

I honestly wrote that post fully committed to running the half. But then I changed my mind.

Here's what happened. I was driving the two hours to Fort Lauderdale on Friday night all alone; Matt was already there, having had a followup for the protein/SUP clinic he's been doing, and I had all this time to ruminate on my decision. Suddenly, I wasn't excited for the half. Suddenly, I was overwhelmingly afraid to miss this opportunity at redemption that I had put so much thought into since crossing the finish line at BDR.

I talked it over with Kristin, hoping she'd talk some sense into me. Which she did, but not the way I planned: 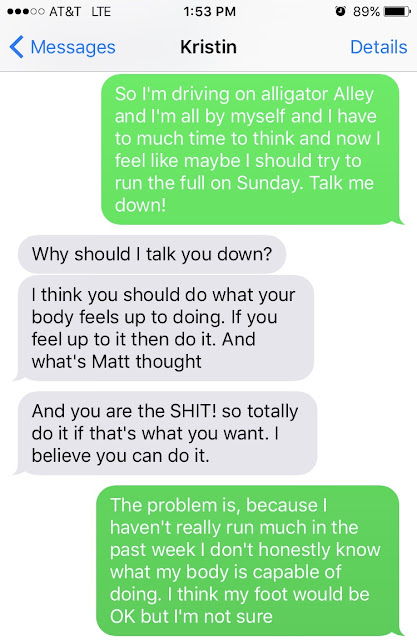 Over dinner Friday, I laid out my thoughts for Matt and Oden, and both agreed that if my foot was feeling better - which it had been for days - that I should go with my gut. I spent the evening comparing my mileage from the last month before Space Coast to January/February of this year, because what was holding me back the most was my fear that I'd tapered too extremely. The mileage was almost exact: 79 for Space Coast and 74 for A1A.
Saturday I had lunch with Kristina and Kerry (which was so fun!) and they both weighed in as well, mulling over my foot issue and the possibility of injury, but also the fact that if I was going to run a half and possibly hurt myself, why not just run the full? (Runners are nuts, guys.)
I didn't lie in my post about choosing to do the half. But what I came to realize was that my disinterest in the full was actually fear masquerading as disinterest. I wanted my PR so badly, it was terrifying me. It was a huge risk; I didn't want to face failure again. But I realized all that fear meant I wanted this too much not to try.

So at 4:30pm on Saturday, I picked up my bib and immediately walked it over to be upgraded before I could think on it much more. And then I immediately looked at Matt and did that classic Home Alone face and shrieked, "WHAT HAVE I DONE?!" 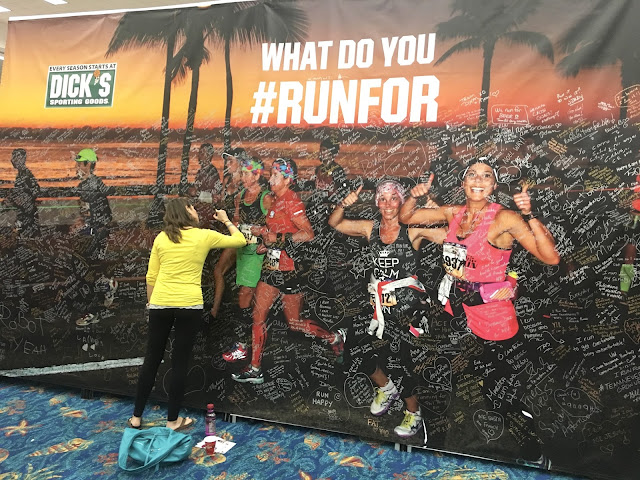 That evening, I called my parents to tell them the news. I figured I may not be advertising that I was running the full, but they deserved to know!
We spent the rest of Saturday figuring out logistics. Oden and Matt decided to rent bikes and meet me along the course a couple times; my sister would meet them later on and then drive them to the finish. But I didn't want to see them too much on the course. I had a new plan: this race was going to be a secret. It was going to be a normal ol' long run. I wasn't going to post about it or tell people I was going. I was just going to do it. My theory was that if I focused on this race without any outside noise, I wouldn't psych myself out and I'd be able to just run the race I knew I had in me.

So that's what I did.

I slept poorly, which meant I was moving slowly when my alarm went off at 3:50am. I had all my clothes laid out already, and I set my pop tart to toast while I got dressed. I also took two Advil, had a banana, a ginger candy chew, and drank a Starbucks espresso double-shot. I was extremely nervous; I was shaking like crazy.
Once we got to the start area, I felt a little calmer. We knew the logistics better this year, so Matt was able to find parking easily and we found the hidden port-a-potties where the lines weren't too long. (Funny sidenote: After using the bathroom the second or third time, I realized my butt felt cold. I think the woman before me had icy-hot on her thighs and it transferred to me! I was sharing icy-hot with a stranger! So weird!)
The weather looked nice. I did some dynamic warmups. I saw Kerry in the corrals and I ran into Miriam again. Things seemed to be falling into place.
My plan was simple and I was dedicated to it: I would run 12:30 miles the entire race. It would guarantee a PR. I had a pacing tattoo on my right arm and planned to follow it religiously.
Before I knew it, the starting gun had gone off and the race began!

I had to remind myself in the first couple miles to stay slow; I let a lot of people pass me. That was okay. Once I realized how easy 12:30 felt, I knew I'd be able to finish the race. I wasn't feeling emotional yet; I don't think the truth of my decision had hit me. 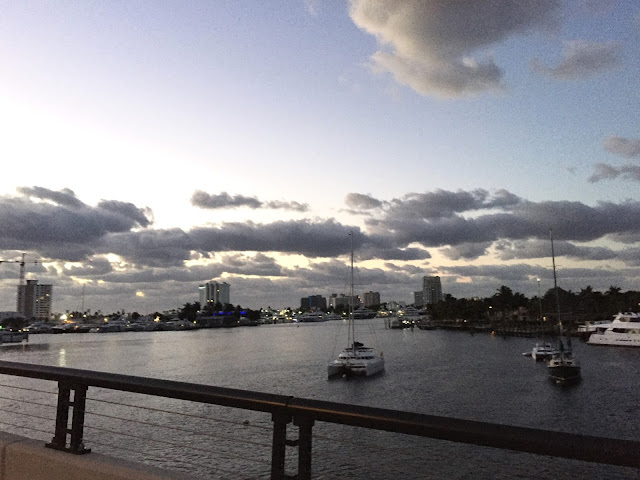 It was cloudy and cool, and the weather promised to stay that way. I was ready for some sun between 8 and 9am, but I wasn't prepared for the wind. The gusts were up to 14mph, but at least they were cold! (And at the end of the race, they were at my back, so that was nice, although around miles 22 and 23, I literally was almost blown off course as the wind was cutting sideways!) 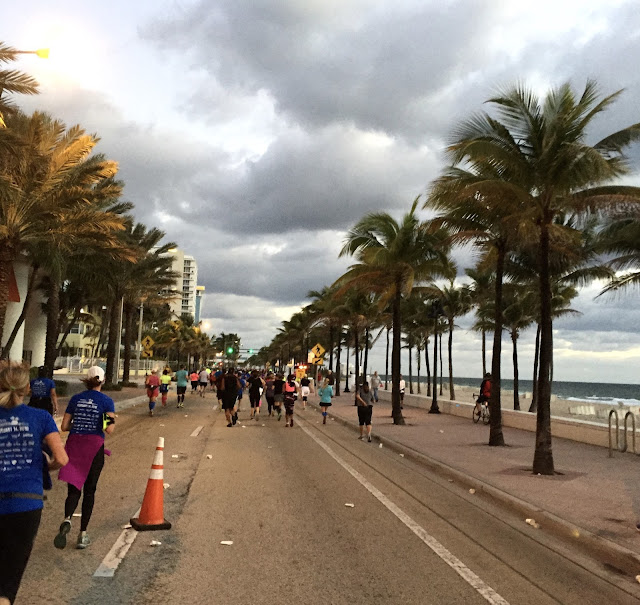 Around mile 5 or 6, I caught up with a familiar face from BDR. We chatted a little about our "never agains" on that course, and then split around mile 7. At that point, I'd dropped my pace into the 11:40s and was having a really hard time slowing down. 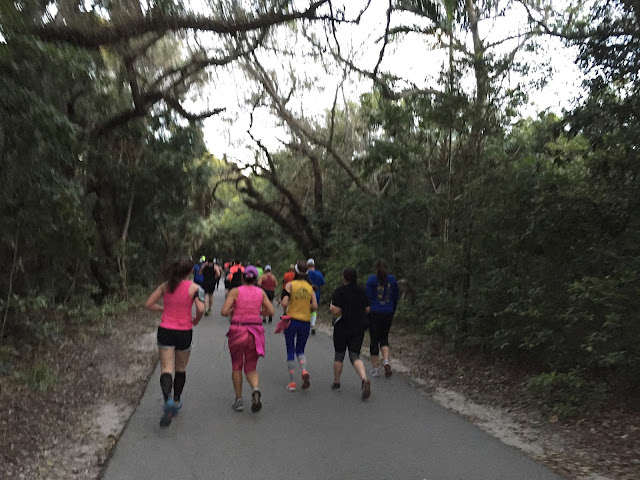 I just let my legs take me. I kept it easy, but didn't fight it. At mile 9, the marathoners and half-marathoners split off, and I texted Matt: "I'm going straight! I'm doing the full!" And a sense of pure joy and elation overtook me. I felt fantastic. I had no foot pain. I wasn't tired. I was doing this!

The crowd thinned, but I was never alone on the course. At mile 11, Matt and Oden caught up with me and I waved at them and told them how great I felt. Matt told me I was way ahead of pace and I shouted, "I'm trying to slow down but I can't!"
I continued on. Miles 12-19 were the toughest mentally; the race was hard in the way marathons are hard, but I never had a doubt I was going to finish. At BDR, by mile 9 I wanted to be done. Sunday, I was absolutely filled with a quiet confidence and feeling of inevitability. I was going to do this.

Throughout the race I just kept thinking, "Oh my gosh, I'm running another marathon. I'm running my third marathon! I'm doing this!"

I won't say the race was easy. It did get warm, but luckily the middle miles were partially shaded by clouds and shadows. I got really hungry around mile 14. (Because I was planning to run the half, I didn't pack my UCAN, and I really think I felt the difference in my blood sugar and hunger levels.) I took a bag of ice from a volunteer. (The volunteers at this race cannot be beat. They're the best I've ever experienced.) The wind picked up and at some points I had to duck my head and cover my mouth to facilitate breathing, and I nearly lost my visor.

It wasn't easy, but I never doubted. I just kept plugging away. 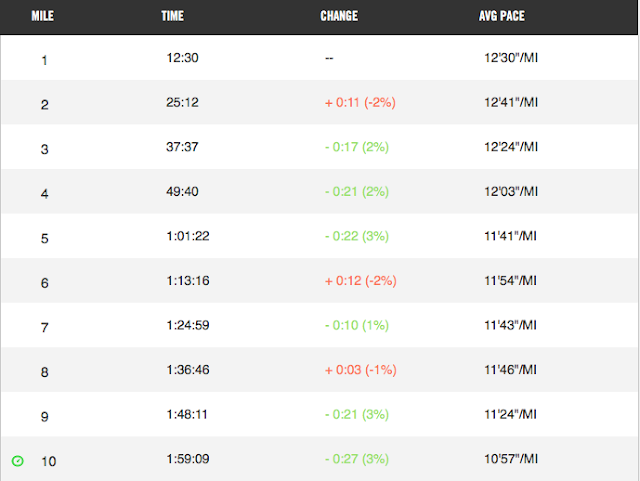 I kept myself positive by thanking every cop I saw; the course is on A1A so there's tons of traffic to redirect, and the officers did a wonderful job of it. I thanked all the volunteers. I smiled at other runners and pedestrians.

I finally stopped to pee around mile 16. I didn't pause my watch at all; I think that made a huge difference in my being able to keep on pace. I knew I'd lost some time and knew I had to keep going. 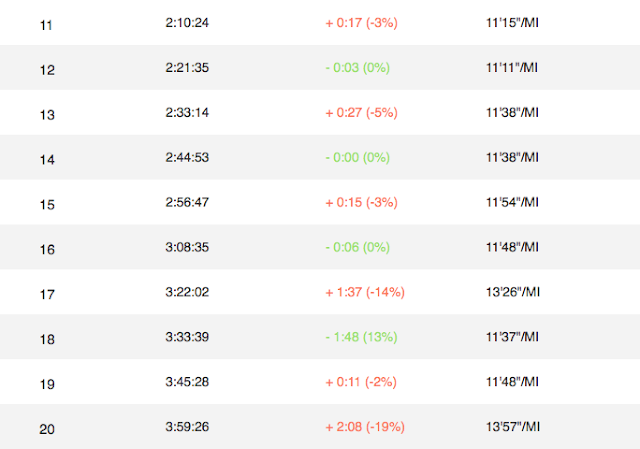 At 19 I took my first walk break, but Matt texted that they had a banana and Coke at mile 20.5, so I picked it up again. At mile 20, Steph ran out to meet me and distracted me from my wall.
I could feel the Coke rejuvenating me. Off I went again; once I got to mile 22, the beach was back in sight and I knew the final stretch was here. I walked again briefly, but I was determined to meet my goal and I was keeping a sharp eye on my pace-time tattoo. I knew the walk breaks were mostly mental because I was in the same amount of pain no matter when I did, so in the end I just bore down and dug deep.
(Steph posted a Snap Story of the day; she caught some cute moments.)

At mile 24 I got really emotional. I was in pain, but a weird sort of calm had taken over. I wasn't going to stop. I was so close I could taste it.

At mile 25 a seagull flew dangerously close to my head and I thought, "If that bird hits me, I'll fall over, and that'll be it. My race will be over. I'll never get back up."

At 26 I saw the clock and couldn't stop grinning. I felt like a lunatic. The tears were close. The second I crossed the line, I dissolved into tears; big, disbelieving sobs. I had done it. I had fought for this PR, this redemption, this vindication of my training, and I had done it. I freaking earned it, every step.

My pacing tattoo was for a 5:30 finish. I finished in 5:25:27...a 16-minute PR!
Matt, Oden, Steph, and Kristina found me. There were the usual post-race things: massage, disjointed recapping of the major highlights, a shower, a huge brunch. 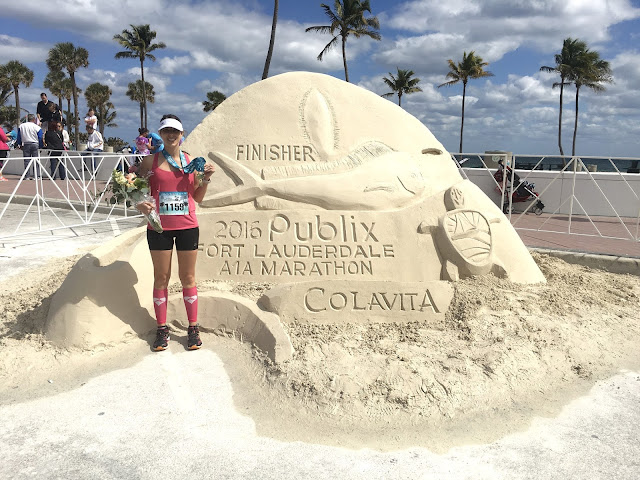 I had quite a few messages from friends that made me laugh. I guess running the full secretly was worth it in the end! It was fun to see all the "wait wait, you did the FULL?!" comments. 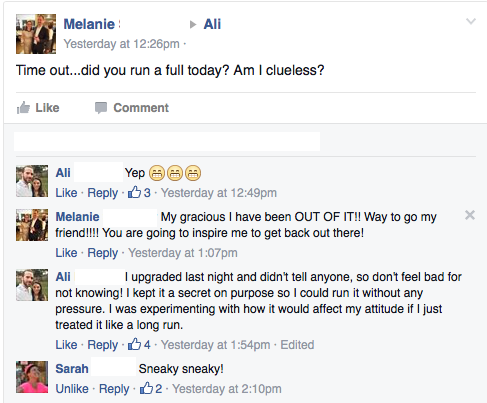 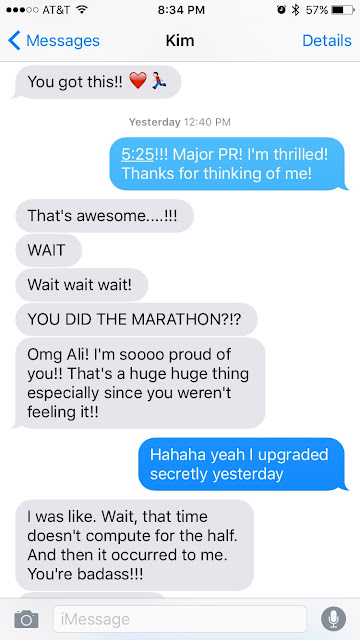 I honestly didn't keep it a secret to trick anyone, but the reaction was pretty entertaining.

Matt had booked a beautiful hotel room for Valentine's Day and my birthday. When we checked in, the bellhop was all, "You're in room 1429? That's the best room in the hotel!" And he was right; the balcony view was unbeatable. 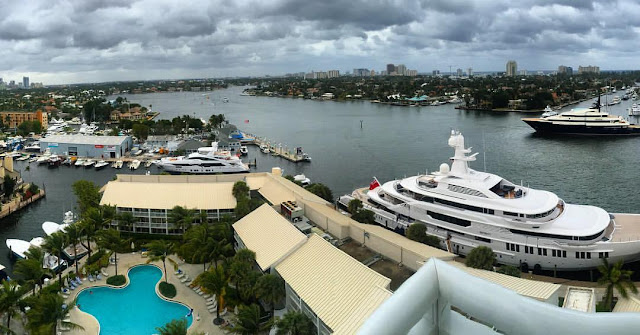 We took a nap, had dinner with Oden, and then I opened my birthday gifts from Matt.
It was the perfect end to a perfect weekend and the perfect way to say goodbye to my 20s. I couldn't have asked for better.